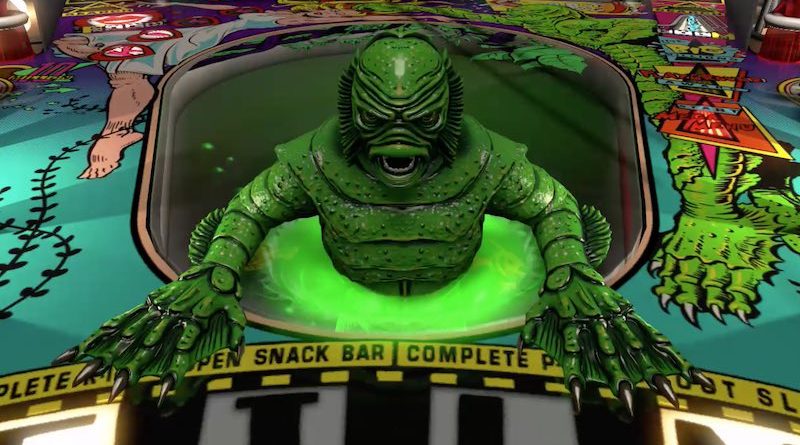 While the proposed Monsterverse movie series is deader than a zombie with a gunshot to the head, the Universal Monsters are still very much alive and kicking. Or biting as the case may be. Director Guillermo Del Toro has said repeatedly that his movie Shape Of Water was inspired by Creature From The Black Lagoon, while the creator of the titular creature, Millicent Patrick, was recently the subject of Mallory O’Meara’s excellent biography / memoir The Lady From The Black Lagoon. There’s also the BBC’s upcoming BBC miniseries, Dracula, which clearly owes as much to Universal’s 1931 movie as it does Bram Stoker’s novel, while the entire film series recently inspired the board game Horrified: Universal Monsters.

And now two of their classic pinball tables are being brought back to life in the Williams Pinball Monster Pack for Pinball FX3 (Xbox One, PlayStation 3, Switch, PC, Mac, iOS, Android). Which is good news for both monster mashers and pinball lovers alike. 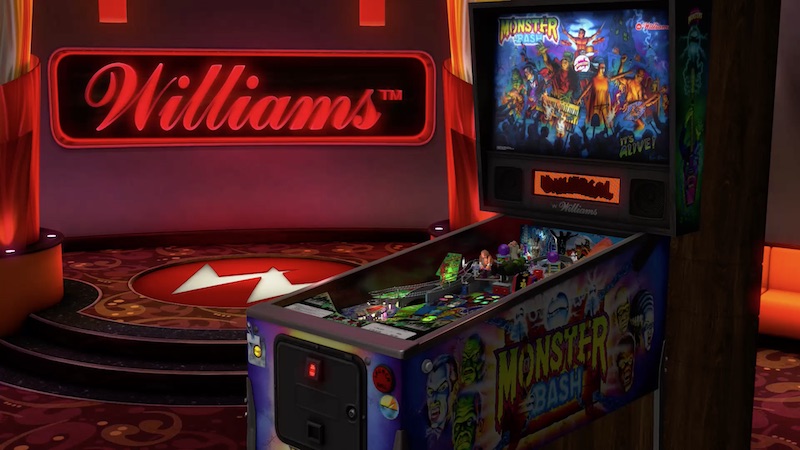 For those unfamiliar with Pinball FX3,

the game is essentially a free platform on which its creators, Zen Studios, usually present their own pinball tables. All of which pair realistic ball physics and sound effects with elaborate mechanics that would be physically and financially impossible in a real table. Things like TIE Fighters dogfighting over the Star Wars: The Last Jedi table.

But since 2018 Zen Studios have also been recreating classic pinball tables made by Williams, starting with Williams Pinball: Volume 1 [my review of which you can read here].

It is part of that ongoing series that we find Williams Pinball Monster Pack, which features two classic tables: 1992’s Creature From The Black Lagoon, which was loosely based on the 1954 movie of the same name, and 1998’s Monster Bash, in which Dracula, The Mummy, Frankenstein’s Monster, The Bride Of Frankenstein, The Wolfman, and the aforementioned Black Lagoon resident teamed up Avengers-style. 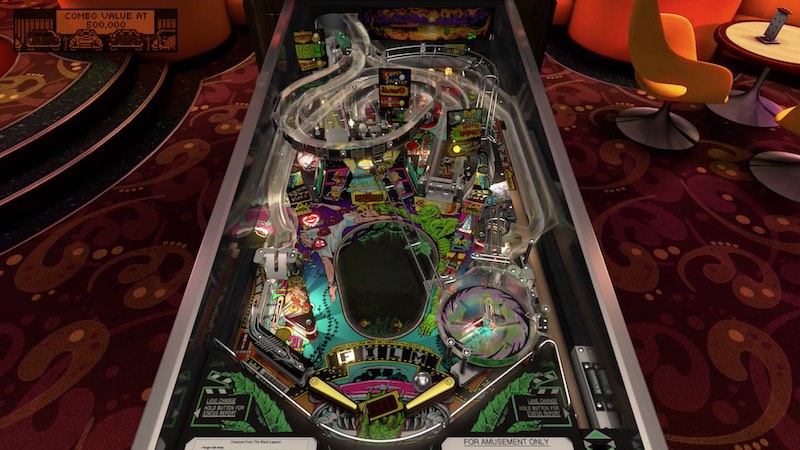 Creature From The Black Lagoon (original)

Now, because the tables…

in Williams Pinball Monster Pack are all based on real pinball machines, they don’t boast the mechanically- and fiscally-impossible gameplay mechanics of Zen Studios’ original tables. Instead, they’ve made two versions of each machine: one a spot-on recreation of the original, and one that has updated visuals. Where the original Creature From The Black Lagoon had an image of the titular monster in the mid-table swamp, the updated version instead has a 3D version that looks like an animated action figure crawling up from the muck.

The changes are much less noticeable in the Monster Bash table, which already had 3D versions of Frankenstein’s Monster and other characters on it. Instead, the updated version swaps the static spiders hanging out by the flippers for two who move like they’re digging on some groovy tunes, man.

Of course, without the smell of stale beer, the tables in the Williams Pinball Monster Pack can only be so realistic. But in playing them, it’s clear the good people at Zen Studios have done an impressive job of recreating these classic tables. As always, the ball physics are spot-on, and the multitude of camera angles recreates what it’s like to play the real thing if you’re tall, short, or, er, a ghost hovering over the table.

As for how the tables in the Williams Pinball Monster Pack stack up, it’s basically a draw, with the two being different but not radically so, and equally fun and challenging. 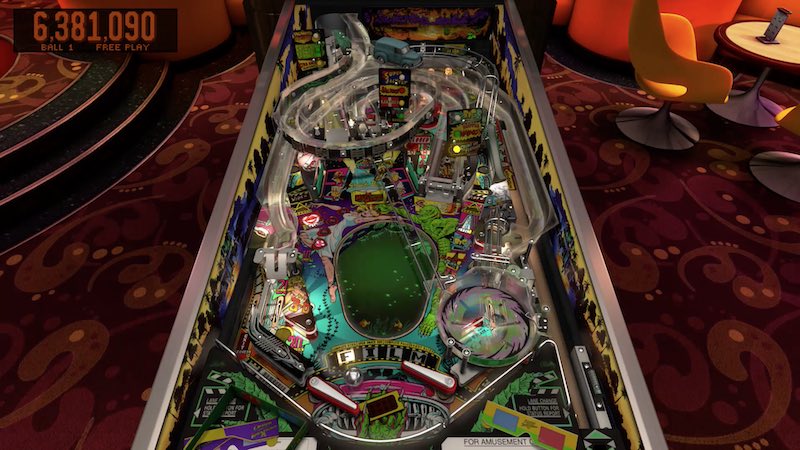 Creature From The Black Lagoon (updated)

First up in the Williams Pinball Monster Pack is…

Creature From The Black Lagoon, which is a comparatively simple table as these things go. While the lower half is largely clear of obstacles, the top is a mess of ramps and pathways, with a bunch of bumpers hidden beneath. As a result, the ball really picks up speed when you play, often quickly shooting downward in unexpected ways. Which can be a problem since, as I mentioned, there’s a pond in the area just above the flippers, and — on both tables — you can see the titular swamp thing swimming around, almost like he’s trying to distract you.

That said, serious fans of the movie might be a bit bummed by the Creature From The Black Lagoon table, though here I mean the original table, not just the two versions in the Williams Pinball Monster Pack. That’s because it doesn’t take its honoree or his biopic as seriously, and is instead as much about going to see the movie as it is about the movie itself. Some of the audio has people yelling “FOCUS!” at the projectionist, while an usher occasionally announces that, “The snack bar is now closed.” 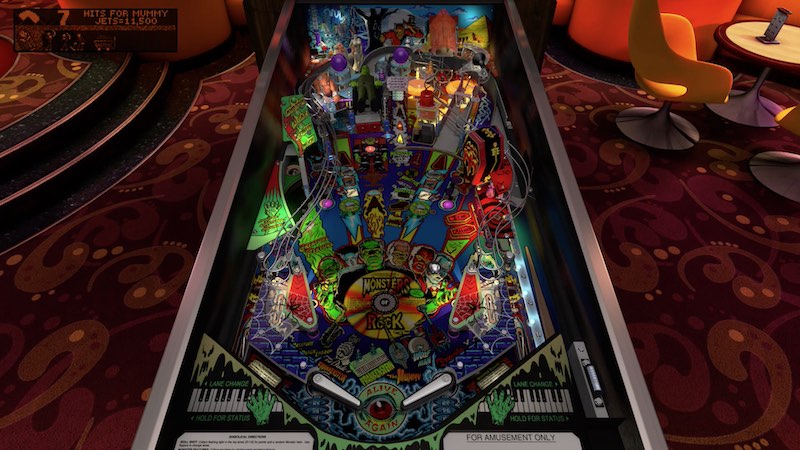 Something similar can also be said…

about the Monster Bash table in the Williams Pinball Monster Pack, which doesn’t treat Frank, Drac, and the gang as serious monsters but as cool characters who might, say, hang out with a famous comedy duo. In fact, it actually has more of a musical theme. The “match the number for a free play” image being a guy with a guitar, while the main image on the table surface is a CD labeled “Monsters Of Rock.” Which is interesting, given that the original was made ten years after Van Halen, The Scorpions, Metallica, Dokken, and Kingdom Come went on their fabled “Monsters Of Rock Tour.” But I digress.

Thankfully, the silliness Williams put into the audio / visual aspects of the table was not present for its mechanics and gameplay. Like the Creature From The Black Lagoon, Monster Bash is an engaging pinball machine. It’s also top heavy, except that instead of a tangle of ramps, pathways, and bumpers, it’s more focused on targets and places for the ball to disappear or get stuck. Which is why the ball never gets the kind of speed on Monster Bash that it does on Creature From The Black Lagoon, though any loss in challenge this may cause is compensated by the increased desire to hit the ball in just the right spot.

What’s also interesting about the version of Monster Bash in the Williams Pinball Monster Pack is that because the original had a button to shoot the ball, not a plunger you pull back, this virtual version has you pressing a face button on your controller, not pulling back on the right thumbstick like you do on the Creature From The Black Lagoon table…and, well, every original table Zen’s made for Pinball FX3. It’s an unnecessary detail, but does show how much love and care goes into recreating these tables accurately. 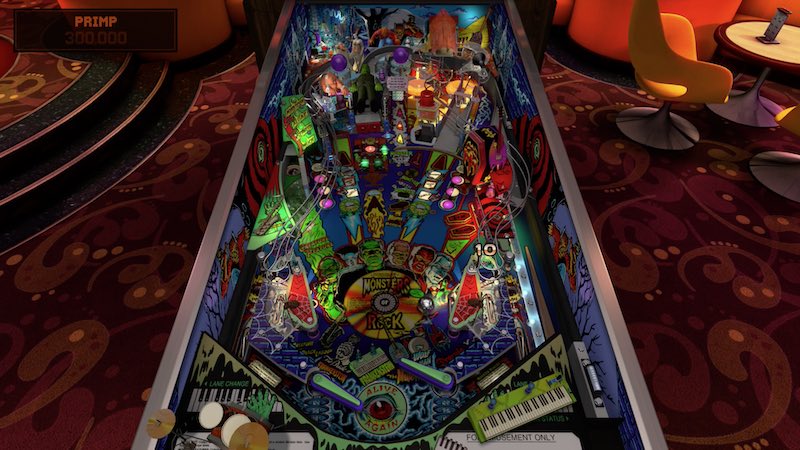 the Williams Pinball Monster Pack — like the previous collections of Williams pinball tables — does a great job of presenting two classic pinball tables as they were back in the day, as well as how they might’ve been if Williams had an unlimited budget and the ability to eschew the laws of physics. Well, save for the smell of stale beer. 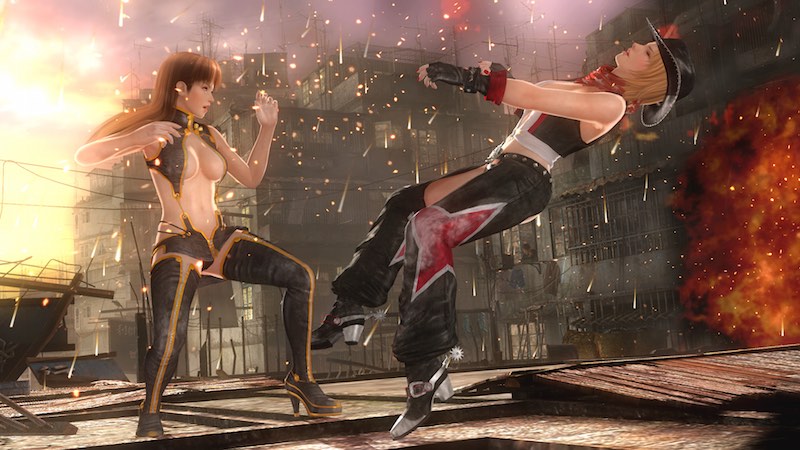 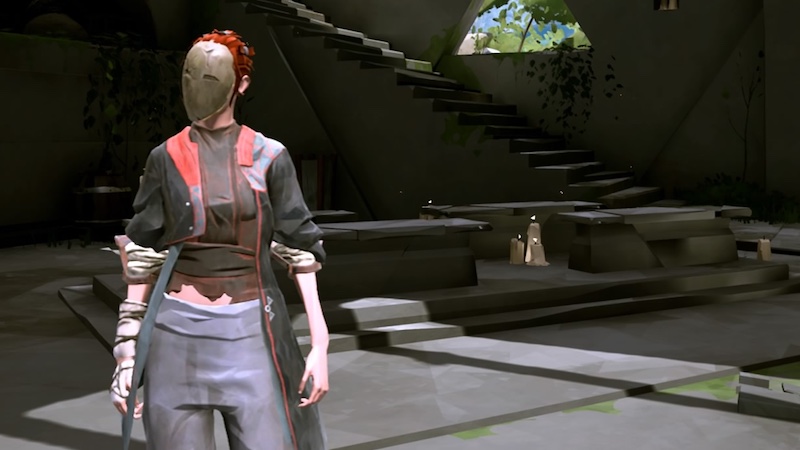