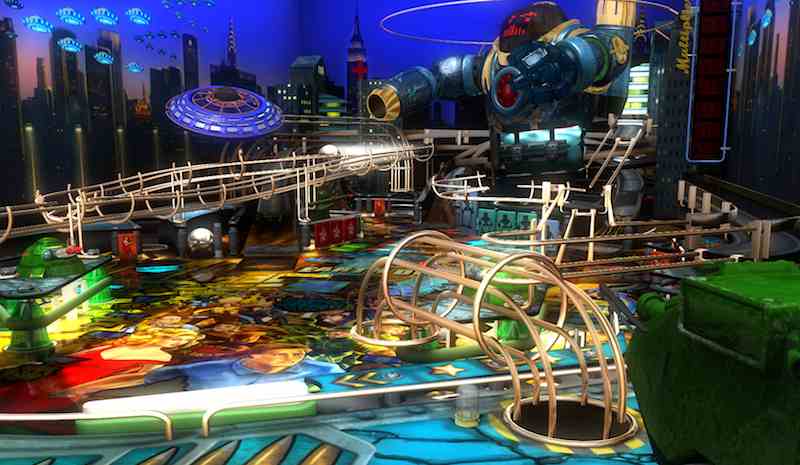 Having already brought their physical realistic but mechanically impossible pinball tables to the PlayStation 3, Xbox 360, Nintendo 3DS, and PlayStation Vita, the good people at Zen Studios are now going next-gen with Zen Pinball 2 for the PlayStation 4. And while it doesn’t include total graphic upgrade like some fans might’ve hoped, these tables are just as much fun as they were on those other systems. 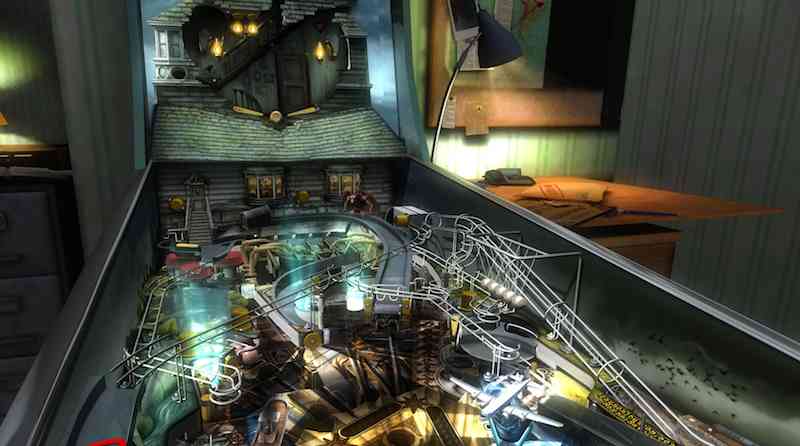 Like those other editions, Zen Pinball 2’s strength is rooted in its realistic physics. The ball not only flies around the table like it would in real life, but they bounce off the bumpers and the flippers with authentic motion with the weight you’d expect from a ball made of metal.

But while the tables in Zen Pinball 2 feel like the real thing, what they do is anything but realistic. Each table is so elaborate that they’d have to be like the T.A.R.D.I.S. on Doctor Who — i.e., way bigger on the inside than it is on the outside — to accommodate all the mechanisms. And even then, not everything they do is physically possible.

Take the Star Wars: Episode V: The Empire Strikes Back table, for instance. Not only does it sometimes have you trying to hit some floating asteroids while a TIE fighter flies overhead, but you’ll also occasionally try to hit a Stormtrooper who tries to deflect your shots with his blaster. Similarly, the Spider-Man table has the Green Goblin riding his glider off to one side while Dr. Octopus occasionally uses his mechanical arms to sauntered down mid-field. 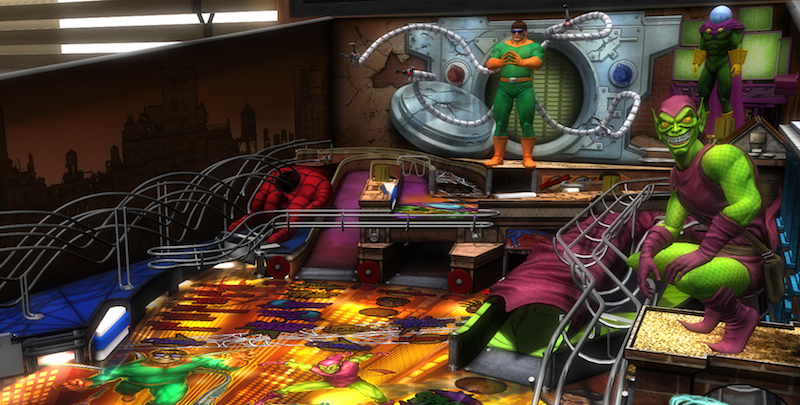 While any single table is enough to keep you entertained for a while, the Zen people clearly don’t want to ever stop playing, which is why they’ve made so many different tables. In fact, there are already twenty available for this edition, including all six of the Star Wars ones, Plants Vs. Zombies, a bunch of the Marvel Comics tables — including Iron Man, Spider-Man, Blade, and the new Doctor Strange one — as well as some of Zen’s original tables: Paranormal, Earth Defense, and Sorcerer’s Lair.

That latter table even comes free when you download Zen Pinball 2, as do any tables you already own on the PS3 or Vita (assuming, of course, they’re among the twenty currently available for the PS4 version). Even cooler, downloading the PlayStation 4 version won’t delete the original one, so you can still play these tables on your old machines whenever you like.

These tables also play just like they do on the PlayStation 3. But they also, in spots, look slightly better. Some of the things on the table seem to move a little smoother, while other things seem to have more definition. For instance, in the background of the Star Wars: Episode VI: The Return Of The Jedi table, the leafy forest looks greener and more alive.

Of course, some fans might be annoyed that Zen didn’t give every table a total graphical overhaul. Y’know, the superficial ones who only care about looks. But considering that these tables looked pretty good before — the wood on the aforementioned Jedi table, for instance, looks like real wood whether you’re on the PS3 or the PS4 — this isn’t so much a complaint as is it an observation.

What I will complain about is that some of the (admittedly superficial) sound issues I had with these tables before are still present. The guy voicing Han Solo for the Empire Strikes Back and Return Of The Jedi tables is just awful, while some of the cheesy sound effects in the Boba Fett table sound like they were lifted from reruns of I Dream Of Jeannie and Rocky & Bullwinkle.

This edition Zen Pinball 2 also has a problem that’s so prevalent in gaming these days that I now just cut and paste this paragraph into almost every review I do: some of the type is too small. Unless you sit really, really close to your TV — y’know, like your mama told you not to — you’ll have a hard time reading some of the mid-game messages, like the one that tells you when you’re about to break your high score. Which is especially annoying since you should be keeping your eye on the ball, not squinting to read some tiny text.

Obviously, if you already have the PS3 or Vita versions of Zen Pinball 2, this is totally worth the upgrade. Especially since, as I mentioned earlier, you can do download tables you already own for free while keeping the original versions intact.

I’d even get this version if you have the Star Wars Pinball game for the 3DS, since this lets you play on a much bigger screen, also lets you play in 3D, but doesn’t have the same sound issues (which you can read about here in my review of that version). 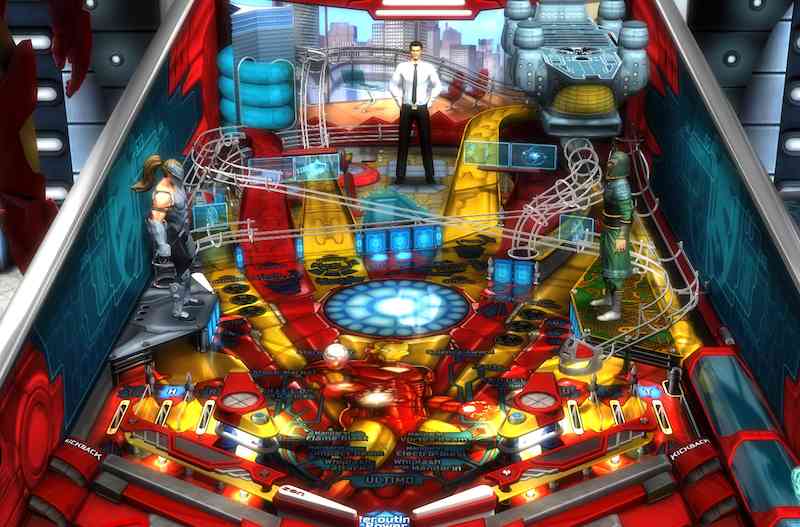 In fact, the only people who might want to wait are those who have Xbox 360 edition, Pinball FX 2, since they won’t be able to download the tables they already own for free, and may not have all of your favorite tables available on the PS4 at this time.

If you’re totally new to Zen’s pinball systems, though, Zen Pinball 2 for the PlayStation 4 is a great place to start. Not only do you get a free table that’s actually one of the better ones, but you can already get nineteen others, many of which — most notably the Blade one, that Jedi one I keep bringing up, and the Star Wars: Clone Wars one — rank among their best. Which, if you’ve played any version of Zen’s pinball platform on any system, you know is saying a lot. 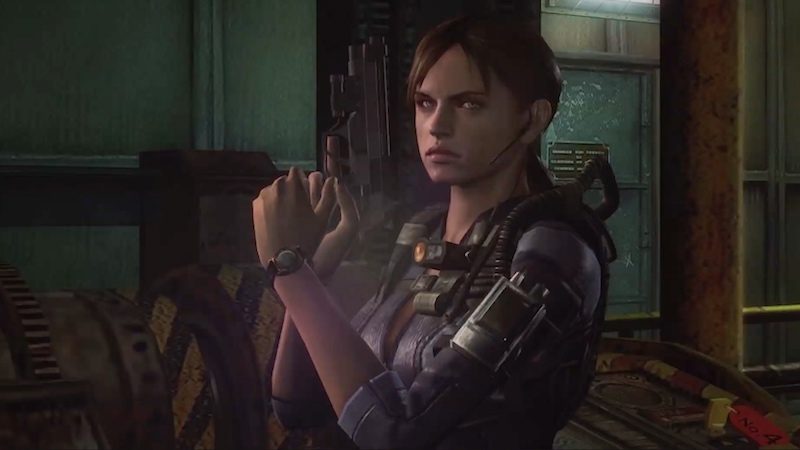 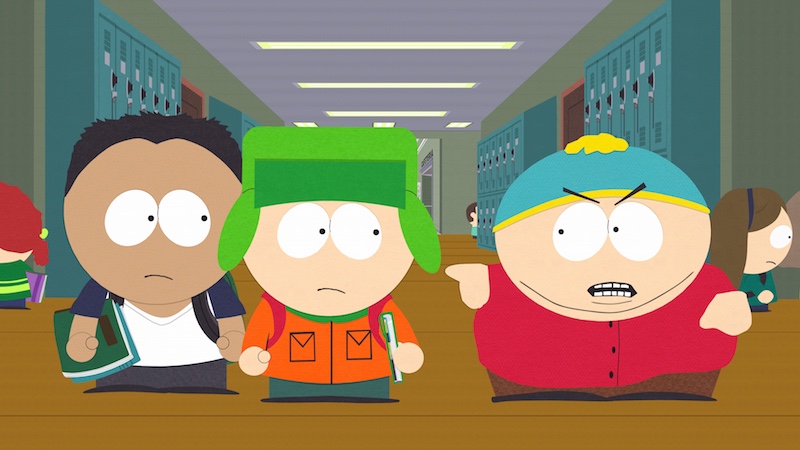 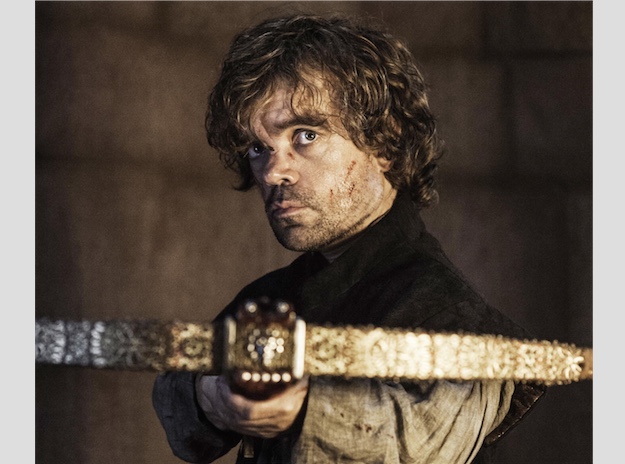 One thought on “EXCLUSIVE REVIEW: Zen Pinball 2 For PlayStation 4”