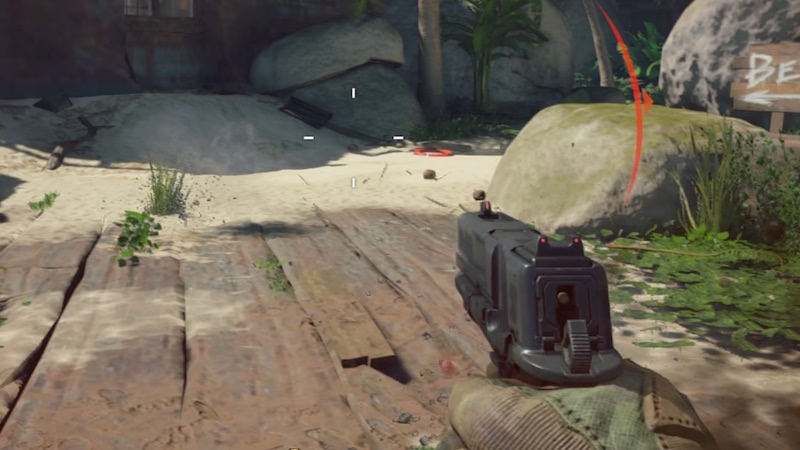 For the first time since the series began fifteen years ago, the new Call Of Duty does not have a story-driven single-player campaign. And yet, the good people at Treyach who made Call Of Duty: Black Ops 4 (PlayStation 4, Xbox One, PC) have repeatedly said that it still has something for people who prefer to play solo. As one of those people, I decided to put their assertion to the test, and found that while you can play this on your own, it may not be for very long. 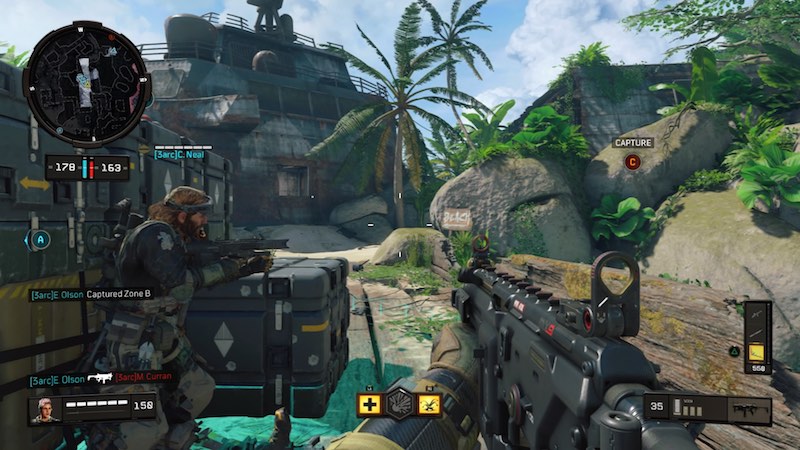 there are three main modes: the requisite online competitive “Multiplayer”; the co-op survival “Zombies” section; and “Blackout,” which is a Call Of Duty-esque version of Fortnite‘s “Battle Royale” mode. But it also has an offshoot of “Multiplayer” called “Specialist HQs” where you can learn about the ten different characters in “Multiplayer.”

Set up as training missions, each of the ten specialist missions in Call Of Duty: Black Ops 4 have you initially learning how to use each character’s grenades, special weapons, and/or deployables. You then test these armaments and skills in a specific round of “Multiplayer,” albeit with computer-controlled enemies and teammates. After learning how to use Ajax’s 9-Bang concussion grenade and Ballistic Shield, for instance, you get to use them in a round of “Team Deathmatch.” Similarly, the specialist mission for Battery follows her weapon training session with a game of “Demolition,” Crash’s are tested in a game of “Kill Confirmed,” Nomad is challenged by some “Search & Destroy,” and so on.

Now, as training for “Multiplayer” in Call Of Duty: Black Ops 4, these specialist missions work well. Though not overly complicated, some of the special weapons do have some interesting combat possibilities, such as how Battery’s Cluster Grenades can stick to people as well as to surfaces. Similarly, this mode is good if you want to learn what’s new or different in “Multiplayer” from Call Of Duty: WW2 or Black Ops III before going up against human opponents. Or rather, it would be if the A.I. acted more like real people. Though reasonably intelligent and good shots, they actually follow the rules of each gametype, instead of playing rounds of “Domination,” “Search & Destroy,” etc. like they’re “Team Deathmatch.”

As helpful as it may be to run through the specialist missions in Call Of Duty: Black Ops 4 before jumping into “Multiplayer,” though, they don’t really work as single-player mission. Especially if you don’t like playing “Free-For-All,” “Hardpoint,” and other “Multiplayer” mode because you don’t like how they work or you’re not competitive. Playing them just feels like you’re playing “Multiplayer,” obviously. Well, except that you can pause the game when need be. 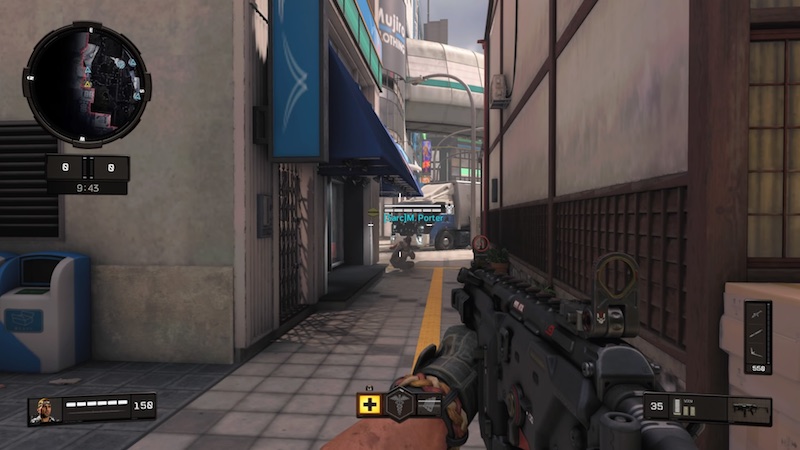 when going through the training sections of these specialist missions, you can be hurt, and even killed. Not sure why they did this, but if it’s to make someone want to replay them, it doesn’t work.

While the specialist missions in Call Of Duty: Black Ops 4 don’t work as a campaign substitute, people who prefer to play on their own will have a better time with the “Zombie” mode. Where before this could be rather frustrating to play solo, it works much better here.

For those unfamiliar with the “Zombie” mode in Call Of Duty, it’s basically a co-op survival mode in which you fight waves upon waves of increasingly stronger, more varied, and more numerous undead enemies, with no end in sight. Except that while similar modes like “Horde” in Gears Of War 4 are typically played in a confined space, and have you constructing fortified bases, the maps in “Zombies” are large, full of intricate and narrow pathways that have to be unlocked, and the only construction is when you board up windows to slow the influx of the undead. “Zombies” also ropes off large sections of the map, only letting you open locked doors if you meet certain conditions or, more commonly, use points earned by killing zombies.

These points can also be used in “Zombies” to buy better weapons. Which is necessary since you always start out with a crappy pistol, every weapon has a limited amount of ammo, and there’s no spare bullets lying around or in the pockets of the undead you’ve destroyed.

The “Zombie” mode in Call Of Duty: Black Ops 4 also has a rather pulpy vibe, not unlike the Indiana Jones movies or the game Strange Brigade. This is most evident in all of the occult imagery, as well as the rather cartoony power-ups — like the floating bomb that turns all the zombies into mini mushroom clouds — the Bioshock-esque perks, and the magical potions you can drink. 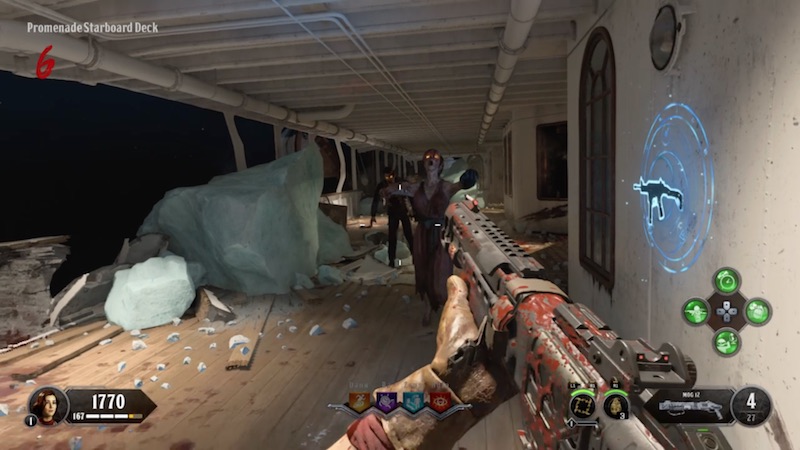 As for playing “Zombies” in Call Of Duty: Black Ops 4 on your own,

this version is way more solo friendly than in games past. There are three lengthy scenarios to play (four if you’ve bought the season pass), all of which have interesting and varied settings. In “Voyage Of Despair,” you and the undead are taking a cruise; “IX” has you transported back to the time of the gladiators; while “Blood Of The Dead” takes you to a prison where Nazis have been doing experiments on the residents.

Call Of Duty: Black Ops 4‘s “Zombies” mode can also be played “Classic” style, or as a more arcade-like variation called “Rush,” as well as on one of four different difficulty settings. Which is good news for those looking for a real challenge or, conversely, those who’d rather feel like a highly-trained bad ass soldier who’d survive the zombie apocalypse than a fat ass fifty-year-old geek who’d be eaten alive.

What makes “Zombies” in Call Of Duty: Black Ops 4 work as a solo experience is that while you can go it alone, you can also opt to be joined by up to three computer-controlled characters who are clearly related to the A.I. soldiers from the specialist missions. Not only do they shoot zombies with proficiency, but they will also unlock doors and, most importantly, revive you when you’re so injured that you fall down. Which is good because “Zombies” doesn’t have checkpoints, nor do you get health packs or any other way to get healthy when you’re hurt. Death is permanent. And also annoying since, when you die, everything resets and you have to start the mission over from the beginning.

It also seems like there’s no end to the number of waves you face in Call Of Duty: Black Ops 4‘s “Zombies” mode, or any sense of progression or accomplishment, outside of how long you survive.

All of which, ultimately, is why “Zombies” in Call Of Duty: Black Ops 4is no substitute for a campaign. Having to replay the same scenario over and over from the same spot may be challenging — which is, admittedly, the point of this mode — but after doing it three or four times, and feeling like I was making no headway, makes it rather tiresome. 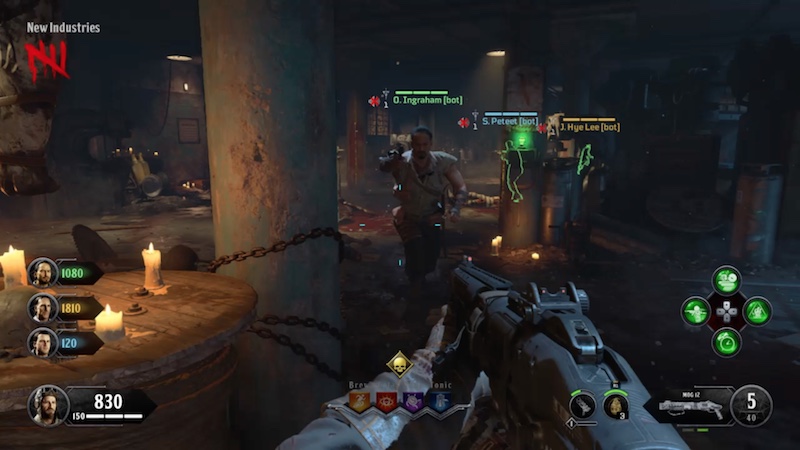 Despite what the good people at Treyach may have said,

and intended, Call Of Duty: Black Ops 4 just doesn’t offer enough for those who don’t play well with others. Well, not enough to warrant buying this game at full price, anyway. The specialist missions are just glorified “Multiplayer” training missions, and while “Zombies” works better as a solo experience than it has in previous games, its redundancy quickly wears thin. I just hope we won’t have to worry about this for another fifteen years. 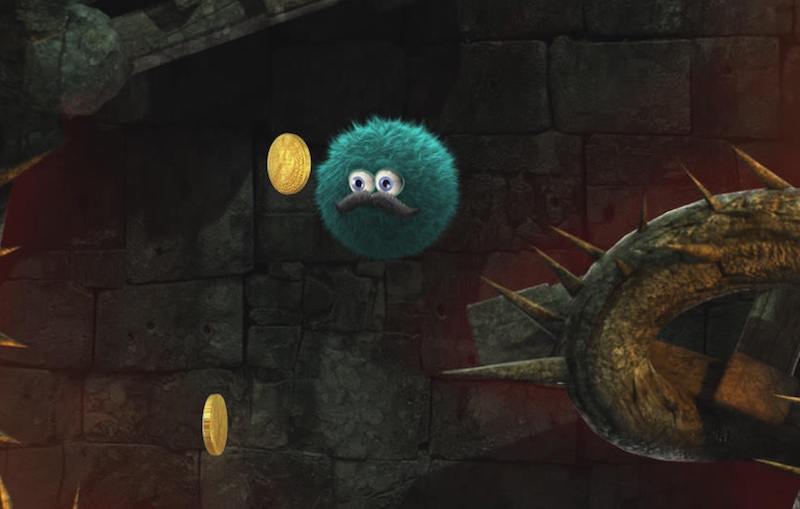 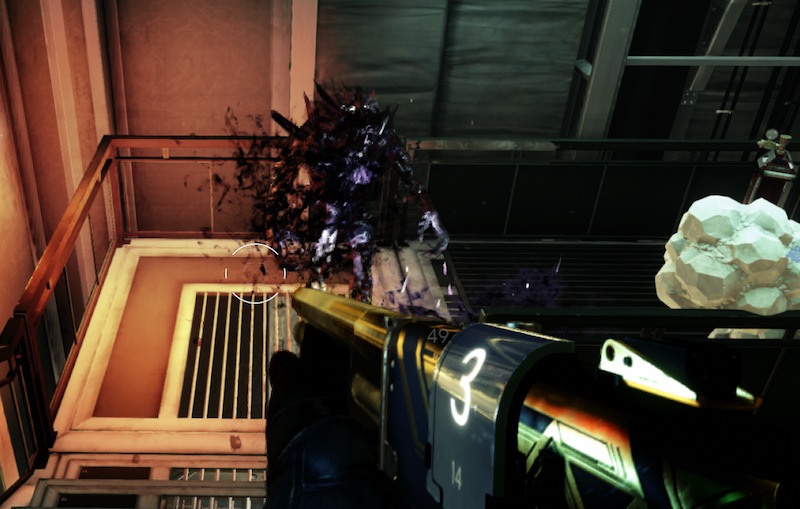 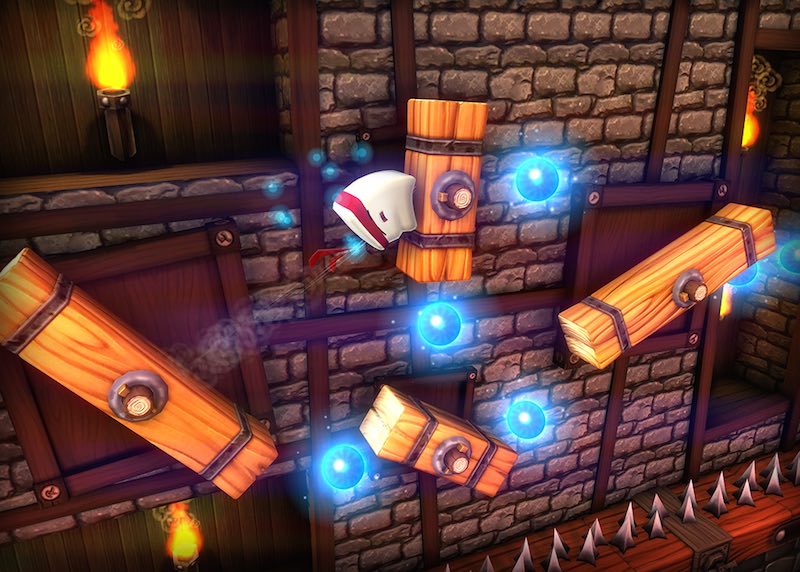