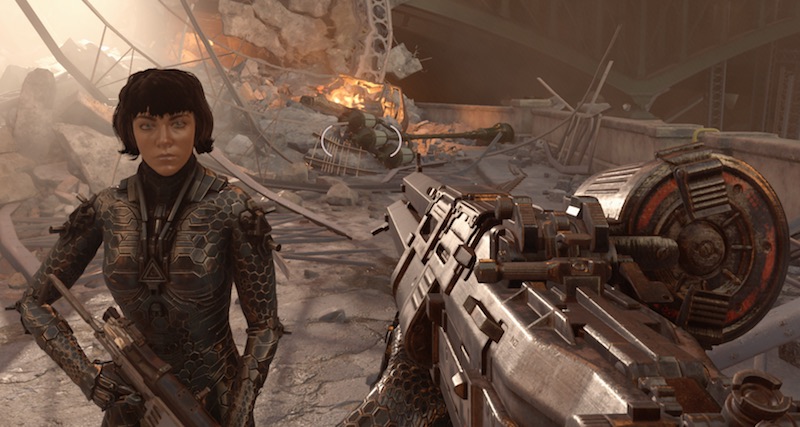 Shooting Nazis in the Wolfenstein games has always been a solitary experience. But while that’s not the case with Wolfenstein: Youngblood (Xbox One, PlayStation 4, PC, Switch), this first-person shooter has some issues that only exist because it’s a co-op game that you can play solo, and not the other way around. 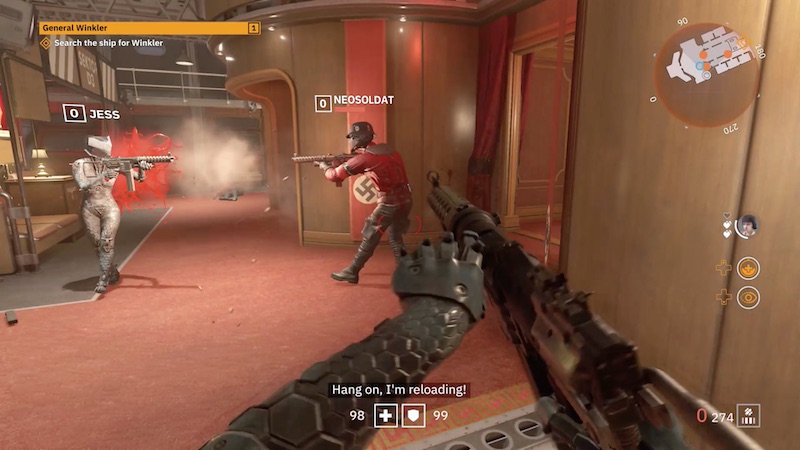 since B.J. Blazkowicz and his fellow resistance fighters liberated the U.S. from the Nazis in Wolfenstein II: The New Colossus. And when Wolfenstein: Youngbloodbegins, we see that his twin daughters are not only all grown up but well-trained as well. Which is good because dear ol’ dad has gone missing in Nazi-controlled Paris, and it’s up to his kids to rescue him.

Like Wolfenstein II: The New Colossus and its predecessor, Wolfenstein: The New Order, Wolfenstein: Youngblood is an alternate-history science fiction shooter in which you use World War II-esque guns, as well some ’50s sci-fi-ish ones, to kill tons of Nazis. All of which is made somewhat easier by the game’s smooth, intuitive controls, and by having the ability to sometimes be sneaky and thin out the heard before your enemies have time to react. Though this isn’t always possible, since many of the Nazis have good situational awareness, and some have suits of power armor that are somewhere between the first one Tony Stark built in Iron Man and his second prototype.

Good thing Wolfenstein: Youngblood gives you and your sis some cool suits, too; ones that let you double jump, take a couple shots before letting you get hurt, and (depending on which you picked when setting up your character) the ability to either become temporarily invisible or do a powerful forward dash like a football player. You can also upgrade your skills and weapons courtesy of a leveling-up system, one that improves other attributes automatically as well.

Of course, being a sequel, Wolfenstein: Youngblood does add a few new tricks. The most welcome of these is that Soph and Jess are kind of grabby, and will quickly pick up any ammo or armor they come across. It’s a welcome change from how, in previous games, B.J. would often take a moment or two before picking stuff up, and even then sometimes needed to be prompted.

Where Wolfenstein: Youngblood really changes things up, though, is that your sister is always by your side. Doubly so if you play this on your own. As with many co-op games you can also play solo, your sis will help you when you’re hurt, and you have to do the same.

But your A.I. sister in Wolfenstein: Youngblood is a lot smarter than most computer-controlled companions. Not only is she a good shot, and understands the importance of flanking, but she also comes quick when you need her to, say, press a button the same time as you press its counterpart. Or, more importantly, when you’re badly hurt. 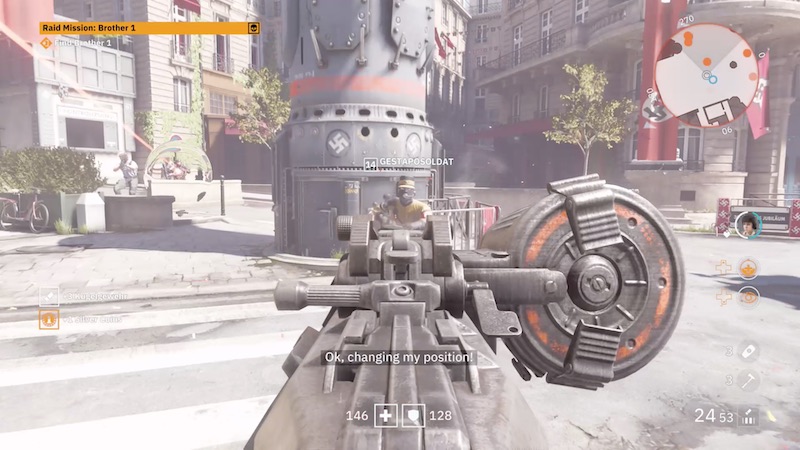 a helpful mechanic called Pep Signals, which are encouraging hand gestures that give you and your sister a temporary boost of health or armor. Granted, you have to decide at the beginning of the game what you’d like your Pep Signal to boost, you don’t get both, but it still comes in handy. Doubly so if you play this on your own, as your A.I. sister is very supportive and will give you a thumbs up when you need it most.

Your sister can also be told to do things, to a point. You have the ability to mark an enemy, though only one. And while doing this in co-op will, of course, just be a suggestion, in single-player, it tells your sister to contrate their fire on that enemy. This, not surprisingly, can be helpful, though it can also be unnecessary since your sister is rather trigger happy.

Your sister’s self-reliance when you play Wolfenstein: Youngblood solo does not, however, make this easier than previous games. Instead, the Nazis counter your two-pronged attack by sending even more soldiers your way, and by making sure more of them are heavily armed. This not only balances things out nicely, but it also often makes for even more frantic firefights.

It’s just too bad Wolfenstein: Youngblood isn’t as well-balanced throughout. There are a number of times when the difficulty suddenly increases, and in a disproportionate way. Not only are there checkpoints that are guarded by numerous heavy enemies, but there are multiple giant Nazi ‘bots that take a lot of damage before they explode.

This, of course, is a problem; an uneven difficulty or abrupt spike in difficulty is always a problem. But it’s even more infuriating in Wolfenstein: Youngblood given how your lives work. Whether you play on your own or with someone else, you and your companion share a set number of lives. Sure, you can find more, there’s boxes of them just lying around. But once they’re gone — no matter who lost them — you die. Which wouldn’t be so bad…except that dying doesn’t kick you back to a checkpoint, it sends you all the way to the beginning of the level. And since many of the levels are huge open areas, with tons of places to explore, having to start them over feels less like a challenge and more like a cheap shot. 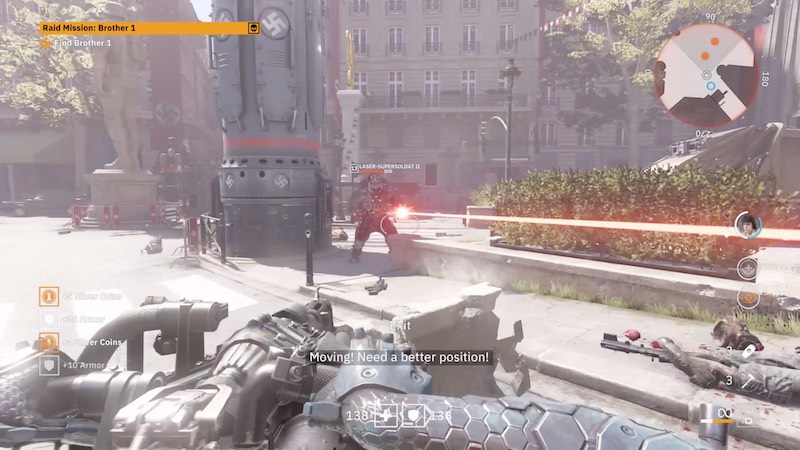 Sadly, this is not the only issue…

Wolfenstein: Youngblood suffers by virtue of being a co-op game you can play solo. Like Destiny 2 and The Division 2, hitting the pause button inexplicably doesn’t pause the game. It just opens up the main menu, leaving you at risk if you reflexively hit the pause button when the phone rings or decide to go the “Character” or “Weapons” menus to upgrade your skills or guns.

Not all of the problems with Wolfenstein: Youngblood are connected to it being a co-op game, though. It also has some ill-conceived platforming, which works about as badly here as it does in other first-person shooters. And the default control sensitivity is way off, like it was in Wolfenstein: The New Order and Wolfenstein II: The New Colossus, though it’s easily adjusted.

Then there’s the wooden boxes the Nazis use to transport weapons, armor, and the pieces of silver you use to upgrade your weapons and armor. Compared to previous installments, the small ones are weirdly tough to break open, while the large ones are super easy. Which may not seem like a big deal…until you’re in the middle of a fire fight and really need some armor.

Wolfenstein: Youngblood also doesn’t do a great job at telling its story. Granted, it does what it’s supposed to do — set up the action — but it jumps around in a way that’s awkwardly abrupt and disjointed. It also doesn’t do enough with Jess and Soph. While there are some fun bits of them when they’re in an elevator and don’t know they’re on security camera, they don’t have much in the way of witty banter. It’s hard not to wonder how much more entertaining this would’ve been if Soph and Jess had kind of comic timing and penchant for quips that Chloe and Nadine displayed in Uncharted: The Lost Legacy. 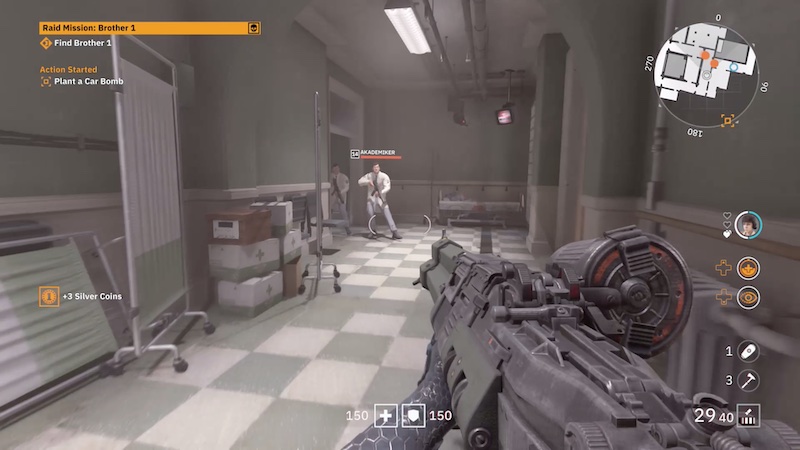 Wolfenstein: Youngblood is an engaging first-person shooter, and yet another fun opportunity to shoot Nazis in the face. But it’s hard not to see how, with a more even difficulty, some checkpoints, and the ability to pause when playing on your own — i.e., had it been a solo game you can play co-op and not the other way around — this could’ve been as good as the solo-only games before it.