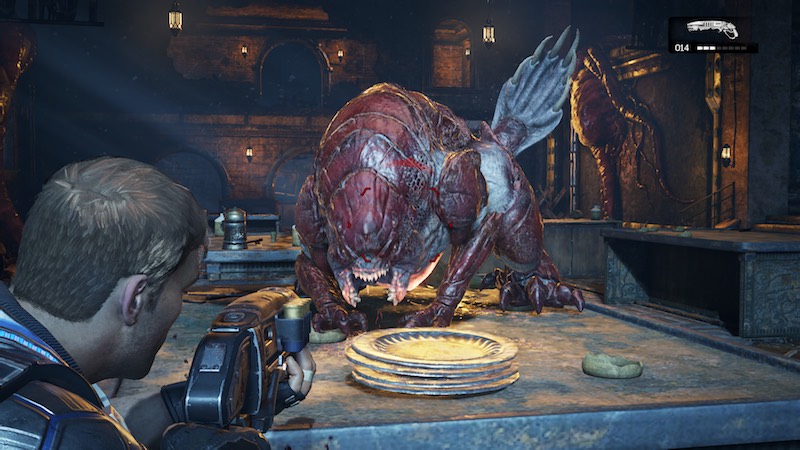 Since it began, the sci-fi, cover-based, third-person shooters in the Gears Of War series have been as much about their multiplayer and co-op modes as they are their story-driven campaigns. More so for some people. And the same is certainly true for the newest, Gears Of War 4 (Xbox One, Ultimate Edition Xbox One, PC, Ultimate Edition PC). But while we wait for the game to come out so I can test its online modes, here’s an assessment of the game’s story-driven campaign. 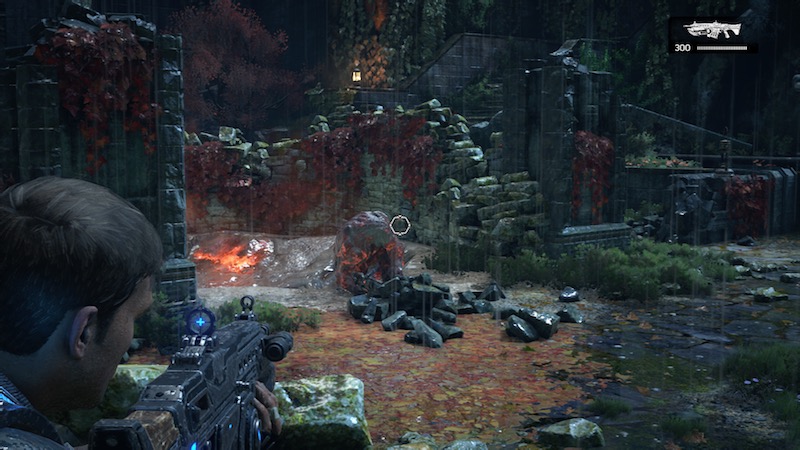 It’s been years since Marcus Fenix and the rest of Delta Squad wiped out The Locust and The Lambent at the end of Gears Of War 3, and the people of Sera are enjoying the peace and quiet. Well, mostly. Some people don’t trust the somewhat overprotective government, and thus live outside their jurisdiction. Playing as one of those Outsiders, a former C.O.G. soldier named J.D., you start off fighting the government, but end up battling something far, far worse.

Playable either alone or with a friend, the campaign in Gears Of War 4 has you doing many of the same things you did in the previous games. You’re still shooting at, and being shot by, strange creatures as you move in and out of cover, while also dealing with other oddities that don’t use guns or feel the need to duck for cover. All of which happens in war-torn environments, and is driven by a gritty but cinematic, action movie-esque sci-fi story. It’s kind of like if they set Call Of Duty: World Of War on an alien world, changed the perspective from first to third, and gave you and your enemies lots of barriers to hide behind.

But what makes Gears Of War 4 feel fresh, and not like the fifth game in a series, is how much of the gameplay has been expanded upon in creative ways. When the game begins, for instance, J.D. and his friend are not fighting aliens in the ruin of a military installation, but humanoid security robots in a ’50s-looking city that’s under construction. Which makes the first couple missions feel like you’re fighting Terminators in the city from BioShock Infinite.

Not surprisingly, some of the ‘bots in Gears Of War 4, like the biological enemies you face later on, behave like The Locust and The Lambent did in the previous ones. For instance, the larger robots will explode when damaged like The Lambent used to do, while the spider-looking ‘bots known as Trackers come right towards you, stop, then explode, just like Locust Tickers. 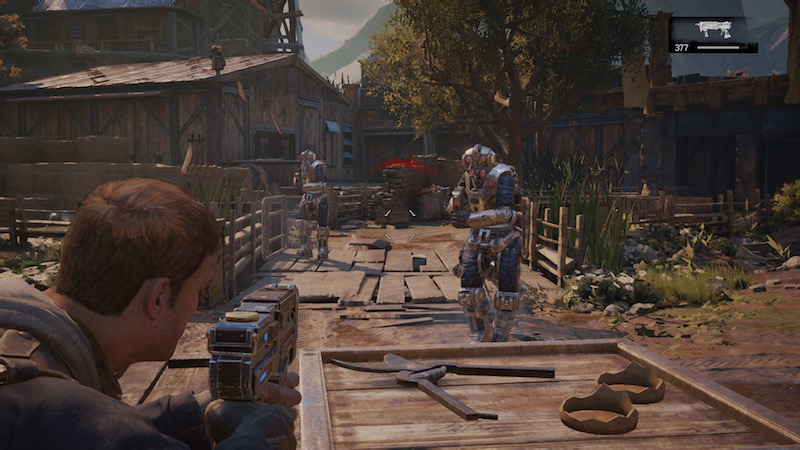 But for every familiar enemy, Gears Of War 4 has a new one as well. Snatchers, for instance, shoot quills from their tails, and will pull you into a pouch in their bellies, where they’ll hold you, unable to fight back, until one of your squad mates shoots it enough times that it drops you. Or it runs off with you still inside. Meanwhile, the Snatchers’ smaller cousins, Pouncers, which have similarly spiked tails, don’t have passenger pouches, and will instead pounce on you, usually from on top of barriers you use to take cover.

Speaking of which, while the cover mechanics in Gears Of War 4 work the same as they did before, they’ve also been augmented. When taking cover, you can now lean across a barrier, grab an enemy on the other side, pull them over, and greet them with a knife to the neck. You can also run towards a cover object and slide across it like Bo or Luke Duke if they ever slid across the hood of the General Lee and kicked Sheriff Rosco P. Coltrane in the face. In addition, many objects you might duck behind for safety are now breakable. Or pop-able, as the case may be. There’s even a part towards the end, which I won’t spoil, that messes with the concept of cover in a rather creative way.

You even have to content with the weather in Gears Of War 4. The planet Sera now suffers from some Mad Max: Fury Road-esque windy lightning storms that can create painful electrical fields. Though, on the plus side, you can use the wind to send objects flying towards your enemies by shooting the flimsy wood poles holding said objects in place.

There’s even some fun new weapons in Gears Of War 4. Besides such old favorites as the Lancers, Torque Bows, and the always overpowered Gnasher, you now have access to a handheld railgun dubbed the EMBAR, a two-for-one shot shotgun called the Overkill, and the Dead Space-esque Buzzkill, which shoots circular sawblades. 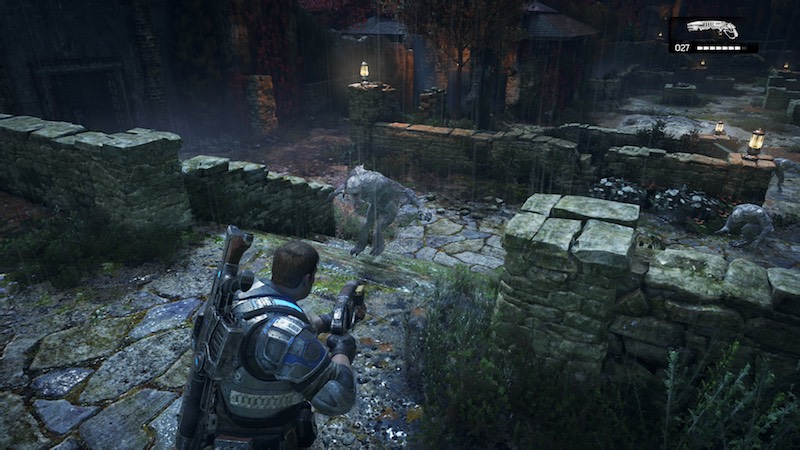 While the campaign in Gears Of War 4 is exciting and feels refreshed, it’s not without its problems. The most annoying of which is that instead of using the more intuitive grenade controls of the previous game, Gears Of War: Judgment, which let you toss grenades with the right bumper and then instantly go back to shooting, Gears Of War 4 employs the stifled button configuration of the earlier, numbered installments, which requires you to hit up on the D-pad to equip a grenade, then use the trigger button to throw it, and then go back to the D-pad to re-equip your gun.

The irony of this is that not only are the controls in Gears Of War 4 spot-on and otherwise intuitive, but there’s actually five five different button configurations and four options for the thumbsticks. It’s just that none of them show any Judgement (sorry).

The campaign in Gears Of War 4 also [SPOILER ALERT] comes to a rather abrupt and unsatisfying end. Granted, the whole game feels like the beginning of a new saga, like it’s setting so much up. And some of that foreshadowing is quite intriguing. But it’s still odd how truncated the ending feels.

Despite these irritations, though, the campaign in Gears Of War 4 is still engaging. While this feels like the earlier games, it adds and changes so much about this series’ basic tenets that it feels familiar but still fresh. So much so that, even if you’re only going to play the campaign, it’s still worth getting since you’ll probably play it multiple times. Like I plan to do. 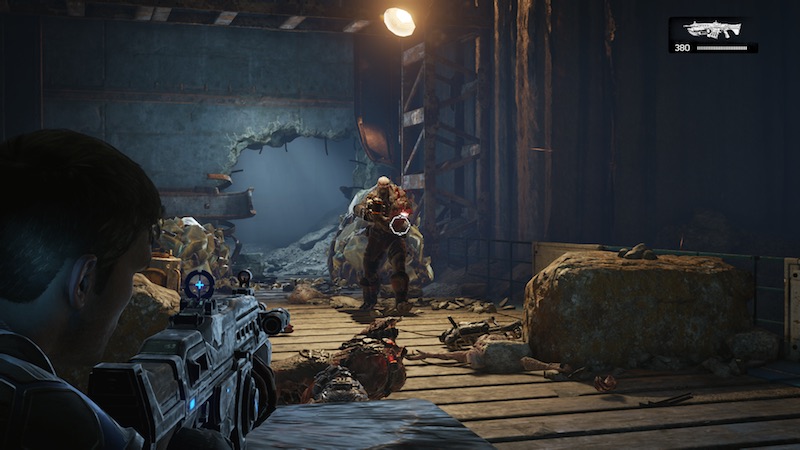 Though as I said, there is much more to Gears Of War 4 than just its story-driven campaign. Check back soon for my assessment of the competitive multiplayer and co-op H.O.R.D.E. modes. 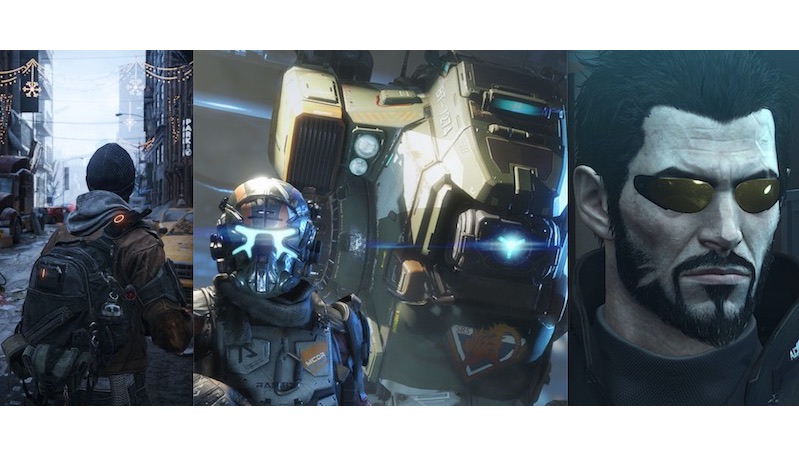 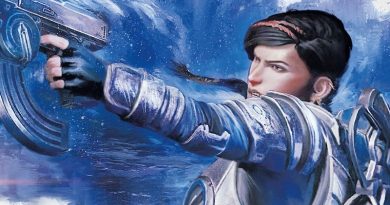 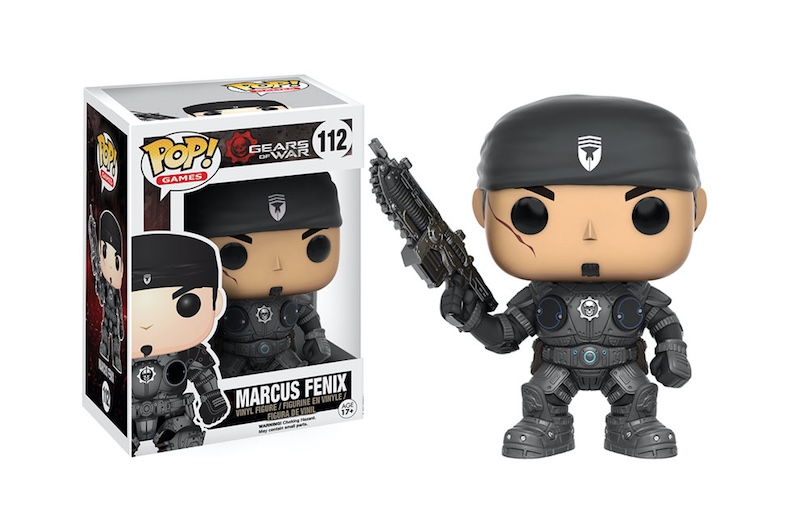