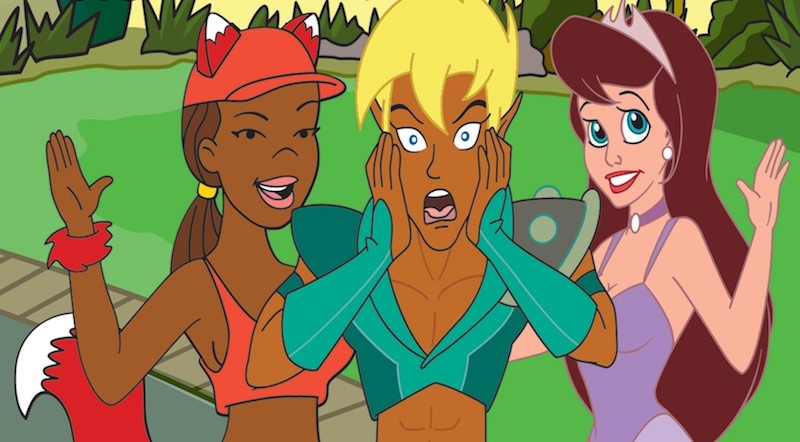 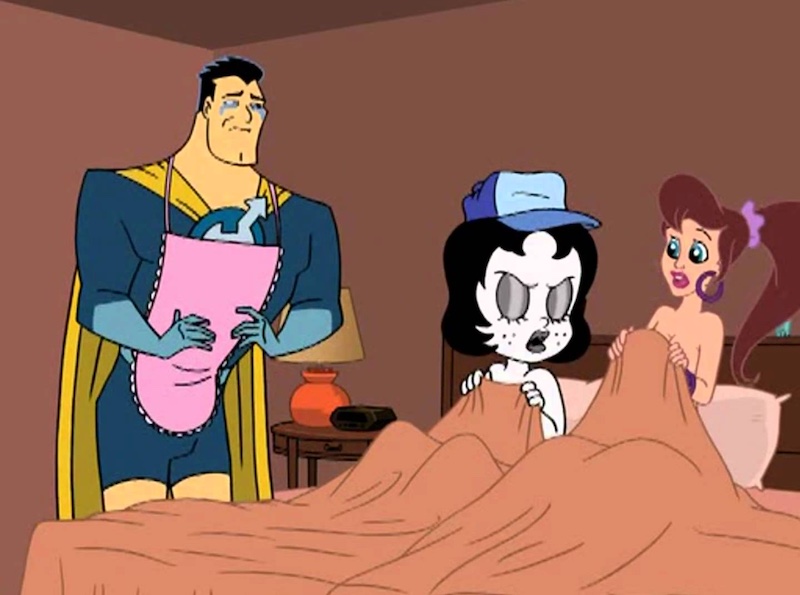 For those who missed this ‘toon,

Drawn Together was essentially a parody of The Real World or Big Brother if instead of a bunch of brats, the house was occupied by spoofs of Superman (Captain Hero), SpongeBob (Wooldoor Sockbat), a Disney Princess (Princess Clara), Valerie from Josie And The Pussycats (Foxxy Love), Betty Boop (Toot Braunstein), Link from The Legend Of Zelda games (Xandir), Pikachu (Ling-Ling), and an Internet cartoon that is itself a parody of Porky Pig (Spanky Ham). Except that most of these characters are playing against type. For example, Princess Clara is super racist and homophobic, while Xandir is on a never-ending quest to save his girlfriend despite the fact that he’s gay.

In other words, it’s like Super Mansion if that show wasn’t just about super heroes.

It’s also not as well written. Or drawn. Or thought out. Though it was well acted, thanks to such cartoon voice vets as Teen Titan GO‘s Tara Strong (Princess Clara), James Arnold Taylor from Star Wars: The Clone Wars (Wooldoor) and Voltron: Legendary Defender‘s Cree Summer (Foxxy Love). It also got better as it progressed, as the characters started to develop some depth as the show went on.

That said, if you are a fan of Drawn Together who, for some reason, doesn’t already own all three seasons and the movie on DVD, well, the Drawn Together The Complete Collection DVD offers that…and more. Though only because the seasonal sets and the movie DVD had a decent selection of extras.

First off, many of the episodes on the Drawn Together The Complete Collection DVD have commentaries by various members of the cast and crew. There are also vintage interviews with many of the same people, though they’re just from season two, so there’s nothing in them about the third season or the movie.

The Drawn Together The Complete Collection also has a collection of deleted scenes from season one. And while most are interesting, there’s nothing to indicate which episodes they were cut from, or why they were excised.

Though it is pretty funny that one of them has the Donald Trump/Richie Rich parody character Lucky Bucks declaring, “No business is successful without the help of Mexicans. That’s why, for this challenge, the team that smuggles the most Mexicans across the border, wins.” 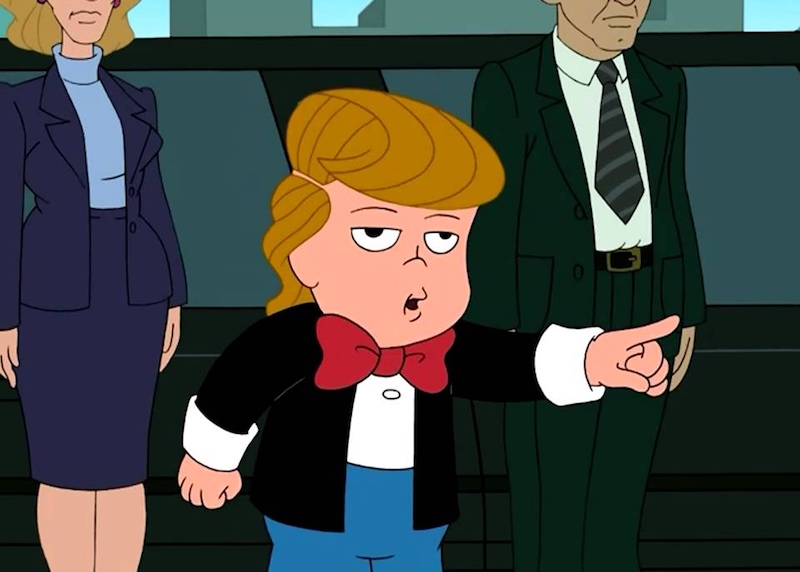 the Drawn Together The Complete Collection DVD has “The Censored/Uncensored Game,” an interactive on-screen game where you try to guess which bits of dialog were cut from the aired version of the first season, and which weren’t. I think you’ll be pleasantly surprised.

The Drawn Together The Complete Collection DVD also has the recaps segments that often proceeded the show, as well as the promos for all three seasons, all which are interesting to watch in a completionist kind of way.

The three seasonal collections included in the Drawn Together The Complete Collection DVD also each have their own “Karaoke Sing-A-Long” sections, which, naturally, puts the lyrics on screen so you can, well, sing along with your favorite tunes from the show. Though because this is the three season sets repackaged, and not a new and properly configured collection, you have to constantly change discs during your Drawn Together Karaoke Party.

Lastly, the Drawn Together The Complete Collection DVD has a bunch of extras that are just about the movie. Including its own commentary and set of deleted scenes, the latter of which, again, are fun but without context. There’s also “Drawn Together: True Confessionals,” in which the cast and crew talk about how the show was cancelled and then brought back for the movie; “Drawn Together: The Legacy,” a retrospective by someone who clearly thought more of this show than anyone who ever watched it…or worked on it; a making-of featurette called “Anatomy Of A Sex Scene” about the movie’s 3D sex scene; another making-of featurette about the movie as a whole called “Re-Animated Drawn Together: From The Small Screen To The Slightly Bigger Screen”; and “Drawn Together Minisodes,” which are short videos about each of the characters.

What’s annoying, though — or, rather, further annoying — is that while the movie was made for 3D, and the 3D version is included here (along with a 2D version), this doesn’t come with 3D glasses. Though apparently neither did the original DVD of The Drawn Together Movie, since this collection, like that one, has a funny but helpful video about how to make your own old school 3D glasses.

Oh, and yes, the website you need to reference is still up. I checked. 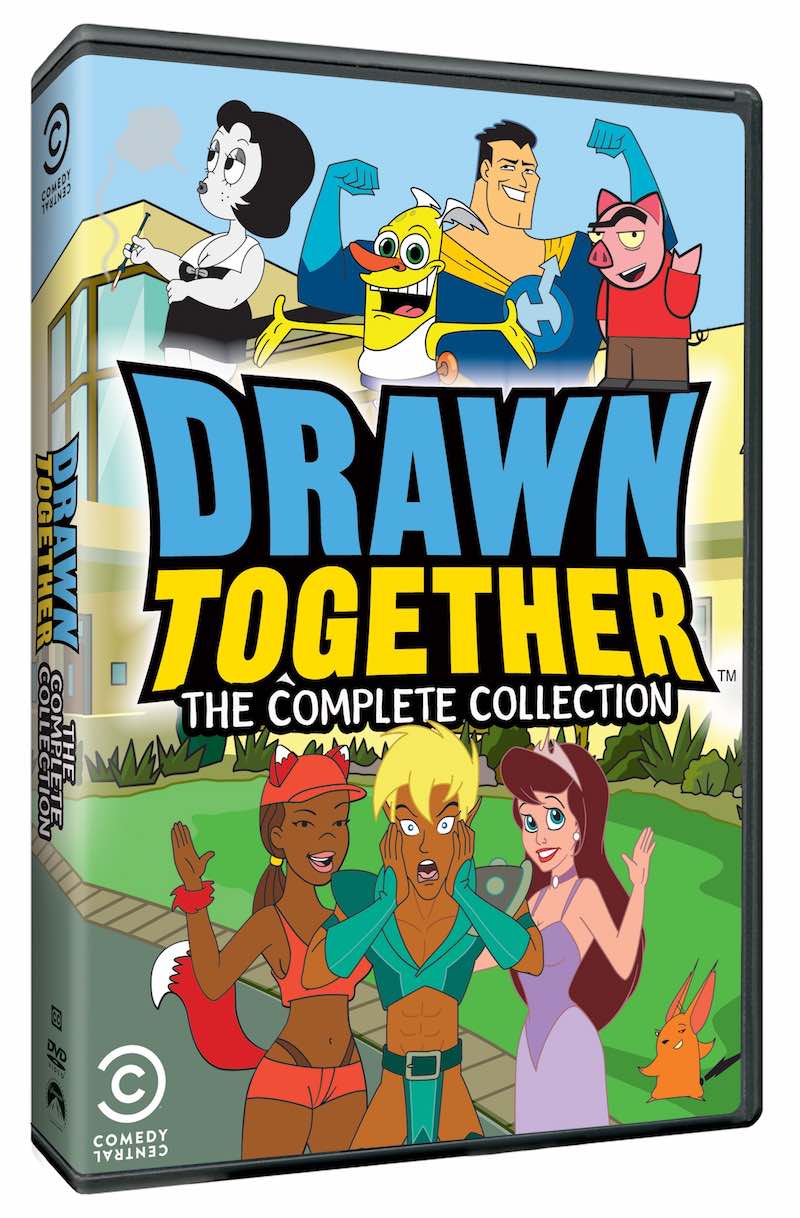 I expected more from the Drawn Together The Complete Collection DVD. I expected it to be new. And I expected it to come with 3D glasses for the 3D movie. But if you were a fan of this show, and you never bought the seasonal collections and the movie, this does have everything you’ll want. Including some old commercials.