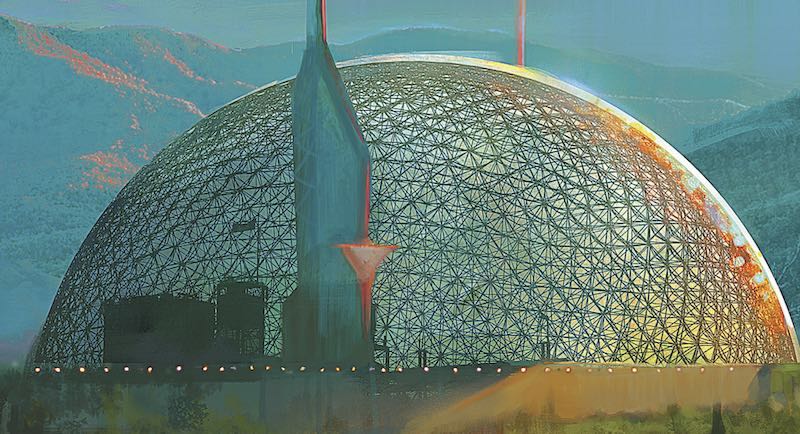 In 1970, writer Michael Bishop wrote “If A Flower Could Eclipse,” the first in what would become a series of short stories and a novel, A Little Knowledge, set in the Urban Nucleus Of Atlanta. Now, all of these tales have been collected in the new anthology The City And The Cygnets (paperback, Kindle). In the following email interview, Bishop explains what this series of stories is about, what inspired it, and whether he thinks this would be a good place to start exploring his impressive oeuvre. 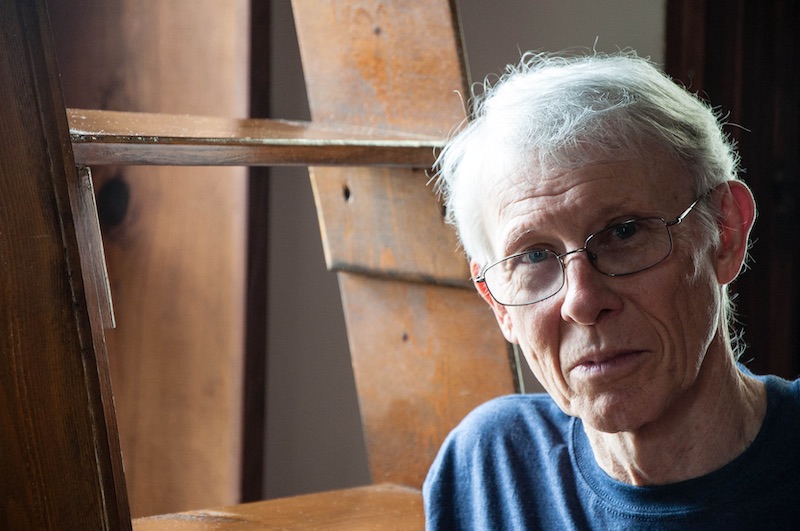 For those who are not familiar with them, what are the Urban Nucleus stories about, and when and where do they take place?

The Urban Nucleus stories are set in the domed city of Atlanta in an alternative America in an alternative twenty- and twenty-first century, encompassing primarily the years 2000 to 2075. The United States, having adopted Preemptive Isolation as its guiding foreign policy, separates into all its former states and the North American Urban Federation during the construction of 25 domed cities (ca. 1994-2004) and dissolves as a discrete entity (post 2004). Many people inside the domed metropolises believe that they are escaping an increasingly polluted world, and the cities hold Evacuation Lotteries to bring people into them as either citizens or unenfranchised laborers.

Meanwhile, a Pan-European Ecumenical Movement leads to the establishment of New Free Europe (NFE) abroad, where research in longevity studies and work on interstellar travel continues apace despite the former U.S.’s utter abandonment of its space program. Although transit tunnels link many of the American Urban Nuclei, real travel among them is infrequent, and most UrNu cities acquire foodstuffs and other merchandise on the QT through off-limits receiving points on their peripheries from the allegedly abandoned and infertile countryside.

All the stories take place against this alternative backdrop, and some of them are complicated or possibly enriched by the introduction of new technologies as well as aliens from the Cygnus double-star system through NFE scientific discoveries and/or the agency of NFE probe ships, who eventually become known, in Atlanta at least, a city with an authoritarian Christian government, as the cygnostikoi…or the cygnets for short. The stories themselves, however, focus on individuals rather than mass political or sociological movements, although the latter certainly affect the lives and the philosophies of the characters.

And why did you set these stories in Atlanta, as opposed to New York or London or West Orange, New Jersey?

Because I’m a long-term resident of Georgia, having lived here continuously since the fall of 1974, and I know Atlanta better than I do N.Y.C., L.A., London, or Peoria, Illinois.

The stories in The City And The Cygnets also deal with class warfare. Did you set out to write stories that were socially relevant or did you start writing the stories and they just naturally became socially-relevant?

The stories to my mind are all character studies, with the domed-city backdrop as a major determinant (although not the only one) of the characters’ attitudes and behaviors, depending on their sociological backgrounds and their levels of education, affluence, and politico-religious interest. Class warfare arises in almost every society, even those with democratic underpinnings and moderately just distributions of wealth, especially if they are diverse societies.

I might add here that I also chose Atlanta because it has a high proportion of black citizens and many other minority ethnicities as well. This aspect of the stories first emerged in the first UrNu story, namely, “If a Flower Could Eclipse.”

The stories in The City And The Cygnets are science fiction. But are there any other genres at work in any of these stories?

“If A Flower Could Eclipse” presents as much as fantasy as it does as SF, but the remainder of the stories and the bridge passages work to subsume the apparent fantasy elements in an overarching psychological explanation.

Are there any writers that had an influence on any stories in The City And The Cygnets but not on anything else you’ve written?

Both Robert Silverberg [Nightwings] and Thomas M. Disch [334] were major influences on the two books that, in heavily revised form, have become The City And The Cygnets. I can’t say that Silverberg and Disch have not influenced others of my stories or novels, however, and feel a real indebtedness to both men, as I also do to Ursula K. Le Guin, Ray Bradbury, Brian W. Aldiss, Frederik Pohl, Phillip K. Dick, etc., etc., if not here than elsewhere in my work.

How about non-literary influences; are there any movies or TV shows that were an influence on any of these stories?

That’s a hard one. I’m a big movie fan, but can’t think of a single specific film or TV series or other non-literary enterprise that consciously affected the writing of this book.

So then what then is included in The City And The Cygnets?

I included all the Urban Nucleus stories that I’ve written to date, arranging them more or less chronologically.

There’s also a 3-page chronology at the back of the book and two accompanying maps within the text, one of the Atlanta UrNu and one of the routes of the resources-reclamation team to the Phoenix Plantation in the novelette “Allegiances.” They were made by my friend and colleague, Michael Hutchins, while the cover was drawn by Amit Dutta, an artist in New Zealand. The City And The Cygnets also features an introduction by the Nebula Award-winning Canadian author Kelly Robson [Gods, Monsters, And The Lucky Peach] titled “The Quality Of Yearning,” and an Afterword by me called “With A Little Help From My Friends…And My Betters.” I’d also like to thank my publisher, editor, and friend Patrick Swenson for green-lighting this project, designing the book, and shepherding it through all the necessary steps to publication.

Does The City And The Cygnets also have any kind of a framing device?

The only device that I can think of is that of the repressive environment of the domed Urban Nuclei, within or outside of which the book’s characters must seek their own identities and self-development.

Yes, all of them. All the stories first appeared in magazine and book form when I was still a pretty young, obviously still learning and developing writer. I revised “The Samurai And The Willows,” [which had previously been published in] a retrospective collection called The Door Gunner And Other Perilous Flights Of Fancy from Bill Schafer’s Subterranean Press in 2011, to smooth out (I hope) some infelicities of style and to account for some technological advances that I hadn’t foreseen at the time I first wrote the stories. You know, minor things like the development of PCs, email, the Internet, and cell phones. I took the same approach in revising the other stories and A Little Knowledge — which had previously appeared as a stand-alone novel — for their inclusion in the big mosaic novel or fix-up The City And The Cygnets.

It’s been my experience that short stories are a good way to get to know a writer. Do you think The City And The Cygnets is a good introduction to your writing?

I think so. Jeff Ford, a writer I greatly admire, recently said that Catacomb Years was a book that he admires and on that basis recommended The City And The Cygnets to others who might not have seen these stories in that early collection.

I might add, however, that I like to do something different from book to book and from story to story and that a series like the Atlanta Urban Nucleus cycle is somewhat unusual in my overall output. I rarely write sequels to my own work and enjoy the challenge of doing something new, if not totally unprecedented, when I go from one project to another. I doubt seriously that I would enjoy trying to sustain a series over the course of a trilogy, much less, say, a six-, seven-, or ten-book cycle. 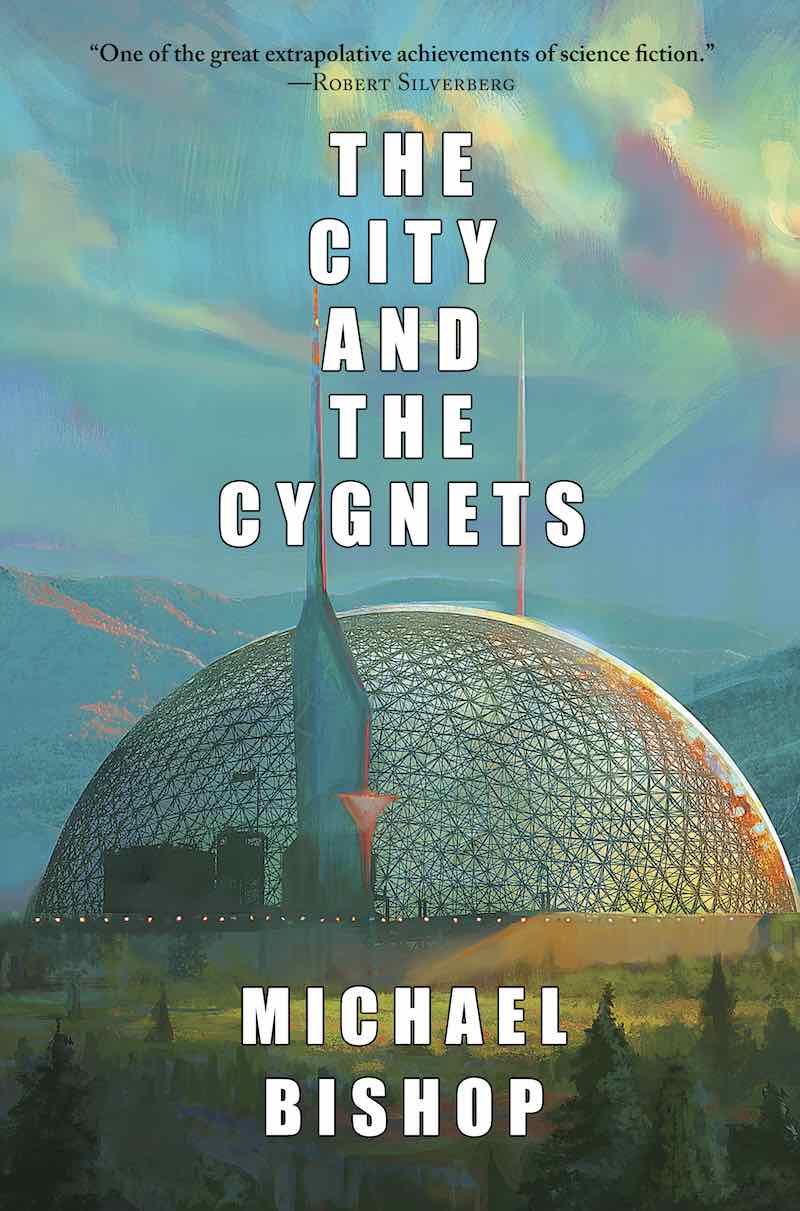 As for other books of mine that readers who like the Urban Nucleus stories might enjoy, all I can do is point them to other collections of mine Blooded On Arachne, One Winter In Eden, Brighten To Incandescence, At The City Limits Of Fate, or the mostly mainstream volume Other Arms Reach Out To Me, and warn them that when it comes to subject matter or even style, I like variety and try not to repeat myself.

My favorites among my novels are the Nebula Award-winning No Enemy But Time, Ancient Of Days, the WW2 Southern Gothic Baseball Novel Brittle Innings, the Mythopoeic Fantasy Award-winning Unicorn Mountain, and the deliberately gonzo homage to a favorite writer of mine, Philip K. Dick Is Dead, Alas.

One thought on “Exclusive Interview: The City And The Cygnets Author Michael Bishop”