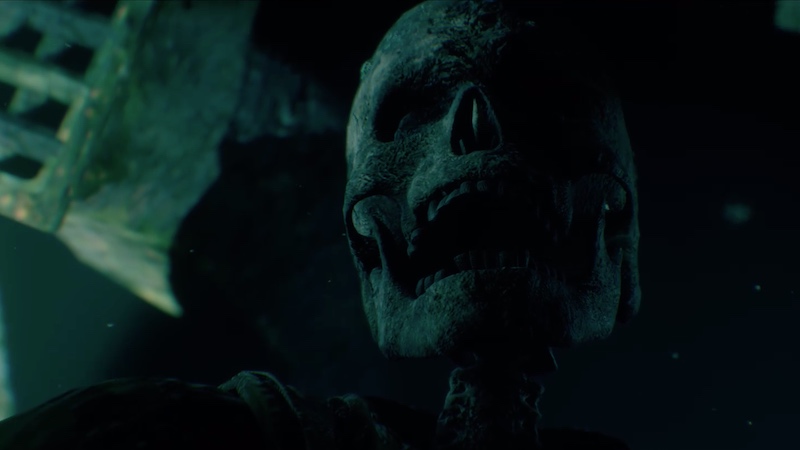 In 2015, when Supermassive made the interactive horror movie game Until Dawn, they showed that while they could do the interactive part better than some other movie game people we could mention (and will in a moment), they had a harder time with the horror. Thankfully, they seem to have learned from their mistakes with The Dark Pictures Anthology: Man Of Medan (Xbox One, PlayStation 4, PC). Not only does it have enough interesting interactivity to keep you paying attention, but it’s pretty scary as well.

In The Dark Pictures Anthology: Man Of Medan,

a ship during World War II is struck by lightning during a storm, and it awakens something…unnatural. Years later, present day, a group of friends led by X-Men star Shawn Ashmore go on a diving trip to find a WW2 plane and, of course, hilarity ensues. If you find death to be hilarious.

Or, to put it another way, it’s like if Detroit: Beyond Human designers Quantic Dream were hired to make a Resident Evil sequel, but told to use regular third-person game controls.

Like other movie games, The Dark Pictures Anthology: Man Of Medan keeps track of the choices you make, and alters the story accordingly. Granted, there are some things you have no control over — you can’t, for instance, make Ashmore less of a dick — but you do have a good variety of options when it comes to what to say and do.

But unlike Quantic Dream’s games, most of the interactive elements in The Dark Pictures Anthology: Man Of Medan are closer to those in third-person action that are cinematic but more action-oriented. Well, those with a fixed camera, that is.

Except that unlike the aforementioned Detroit: Beyond Human and Quantic Dream’s other interactive movie games, The Dark Pictures Anthology: Man Of Medan mostly uses regular button presses to perform actions, not the mix of counter-intuitive thumbstick movements and button combinations the Quantic Dream people love so much. That said, both do share a penchant for making you hit buttons to perform actions that, in an action game, your character would just do automatically. Like, for instance, picking up an object after you open the container it’s in.

Other mechanics in The Dark Pictures Anthology: Man Of Medan…

recall those of more action-oriented games as well. Conversational choices, for instance, are made by pushing the thumbstick one way or another, or no way to say nothing, much like Mass Effect Andromeda. It even has moments that recall Guitar Hero and Rock Band — albeit in a very simplified way — with you hitting a button in time with your heart beat.

As for the horror aspects, it’s here that The Dark Pictures Anthology: Man Of Medan far outstrips Until Dawn, Detroit: Become Human, and many other interactive movie games we could mention. While the story does have some cliché aspects — Ashmore being an entitled rich prick comes to mind — it still works well to set up the scares and the interactivity.

More importantly, it’s clear from the game’s visual trickery and atmospheric sound design that the people at the Supermassive have seen a lot of horror movies. And not just slasher ones, either. Not only do things jump out of you at most inadvertent times — my heart is still racing from some of them — they’re nicely paired with music and sound effects that create an atmosphere of dread, one that makes you tense even before something jumps out at you.

The Dark Pictures Anthology: Man Of Medan even apes the kind of foreboding camera angles that make you think you’re not the only one who’s watching the main character from afar.

As scary and engaging as The Dark Pictures Anthology: Man Of Medan may be, though, it’s not without its issues. Though, thankfully, most don’t take away from the fun or the frights.

some of the dialog text is small and hard to read if you sit at a reasonable distance from your TV. Same for the subtitles, which is a bit odd given that this has an entire menu dedicated to “accessibility” that includes options to put the subtitles against a background.

Having a fixed camera in The Dark Pictures Anthology: Man Of Medan can also be a problem, though usually just when it pulls back for a wide shot, which makes it hard to see where you can go or what you can do. As anyone who played the recent remake of Resident Evil 2 can attest, you don’t need to lock a camera’s position to make a game scary. Or cinematic.

It’s also a bummer that your foot speed in The Dark Pictures Anthology: Man Of Medan is a bit on the slow side. Though really only because it means you have to hold down the “hurry up” button most of the time.

That said, the “hurry up” button thankfully doesn’t make you run, it just makes you go from a casual “there’s nothing wrong” saunter to an, “okay, I’m a little freaked out right now” stroll.

There are also times in when the timer in timed events moves a bit too fast. And while there is an option to have there not be a timer, using it also removes any tension from these interactions.

also sometimes pauses for comments by The Curator, a Rod Serling from The Twilight Zone-esque narrator played by Preacher‘s Pip Torrens. Except that unlike Serling, The Curator’s commentary takes you out of the moment by unintentionally reminding you that this just a game, it can’t really hurt you.

This also doesn’t have a “Previously…”-style recap feature if you take a break and come back to your game later. Though with the game being just five- or six-hours long, you probably won’t take many breaks before you complete it.

While five, six hours is a long time for a horror movie, it’s not that long for a game. Which is why it’s good that there’s solid reasons to play this more than once. For starters, as I mentioned, your choices impact later events, which means your second play-through could be a bit different than your first.

The Dark Pictures Anthology: Man Of Medan also includes a free alternate version of the story the “Curator’s Cut,” which has different playable characters and scenes not in the regular version, the “Theatrical Cut.” Or rather, it will when it comes out at the end of November, and even then you’ll need to have beaten the “Theatrical Cut” to access it.

There are also some co-op options to The Dark Pictures Anthology: Man Of Medan. “Movie Night Mode” lets you and three friends in the same room play together, with each controlling their own character, while “Shared Story” teams you with online companion, and has your choices affecting their game, and vice versa. But like with scary action games, this works way better — and is way scarier — when you’re all alone.

Suffice it to say,

The Dark Pictures Anthology: Man Of Medan is not for everyone. If you hate interactive cutscenes or horror movies or seeing Shawn Ashmore be a huge jerk, you will not enjoy this. And neither will horror movie fans who don’t like video games. But if you’re looking for a real scare, but one in which you have a modicum of control over your own destiny, this is a much more frightening and fun interactive movie game than, well, some others we could mention.