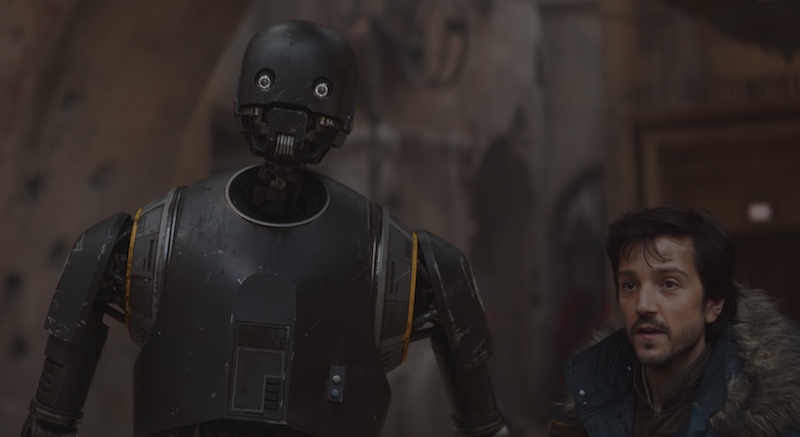 While most people follow the Star Wars story through the movies, the saga has also been told through novels, comics, cartoons, and video games. But while the two are often kept at arm’s length, the newest movie Rogue One A Star Wars Story — which is now available on Blu-ray/DVD combo pack and DVD — is actually an exciting and engaging Star Wars movie that tells a story that would normally have been reserved for a book, graphic novel, or game. Too bad the Blu-ray and DVD aren’t as good as the movie. 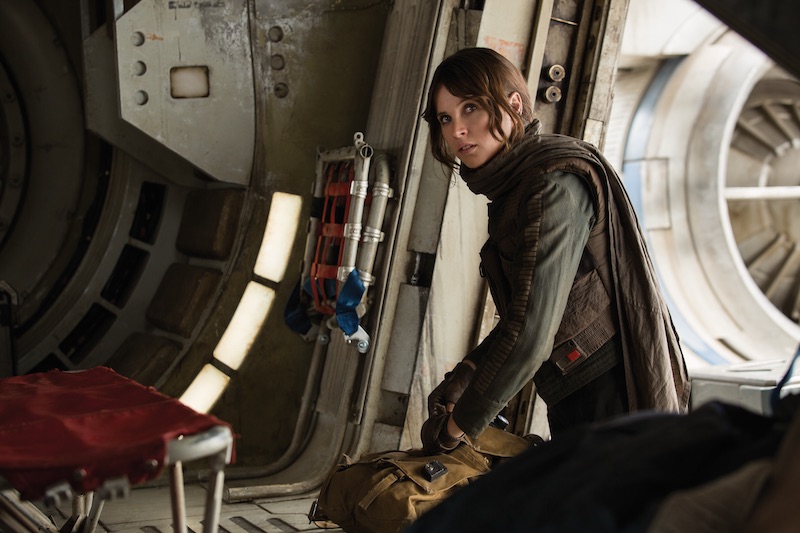 For those who missed it in theaters, Rogue One A Star Wars Story shows how the Rebel Alliance stole the plans for the original Death Star. Y’know, the ones Princess Leia was carrying at the very beginning of Star Wars: Episode IV: A New Hope. Of course, being a Star Wars movie, nothing goes as planned, and it’s up to a diverse, and sometimes bickering group of miscreants to get the job done. But what makes this work, among other things, is that it not only plays like a cross between The Seven Samurai and Oceans 11, but it does so within the framework of a gritty, Saving Private Ryan-ish war movie.

Conversely, Rogue One A Star Wars Story is also the funniest Star Wars movie yet, in no small thanks to the droid K-2SO (Firefly‘s Alan Tudyk) who’s like a cross between Marvin The Paranoid Android from The Hitchhiker’s Guide To The Galaxy and Sheldon from The Big Bang Theory. Which isn’t to say this is as jokey as, say, The Robot Chicken Star Wars specials. The humor is decidedly situational, something that someone would say in that scenario. But you still be chuckling more than ever have watching a Star Wars film.

But this isn’t a bad thing. Though it may just be a footnote, Rogue One A Star Wars Story is still enticing and exciting; it’s not some throwaway piece of trivia. And it’s easily on par with the saga’s other “footnotes,” most notably Claudia Gray’s novel Lost Stars and Jason Aaron’s comics, Star Wars: Volume 1: Skywalker Strikes and Star Wars: Volume 2: Showdown On The Smuggler’s Moon.

What also makes Rogue One A Star Wars Story interesting is how it connects to the other ways the Star Wars saga has been told, especially the cartoons. The character Saw Gerrera (Arrival‘s Forest Whitaker) was not only originally introduced in an episode of Star Wars: The Clone Wars, but he later appeared in two episodes of Star Wars Rebels, while there’s other nods to the latter show that go beyond mere Easter Eggs. 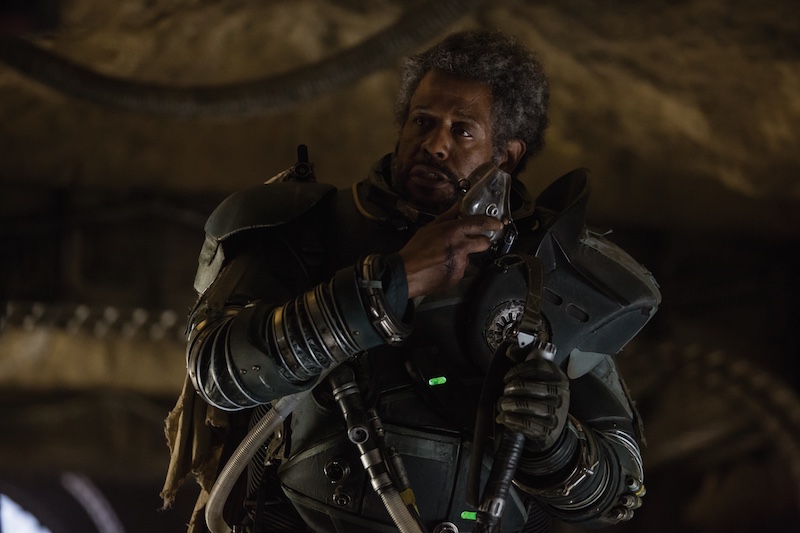 As fun as Rogue One A Star Wars Story may be, though, its corresponding Blu-ray/DVD combo pack and DVD editions doesn’t do it justice. Well, in terms of the extras, anyway.

To start, Rogue One A Star Wars Story includes a series of ten making-of featurettes called “The Stories,” which center on the different characters, and actors who play them, along with details about how the movie came together. But while they feel different from the typical making-of featurettes — in part because it doesn’t sound like the marketing department coached the people being interviewed — “The Stories” as a whole comes up short. Most notably because they don’t go into as much detail about the filming, the special effects, or the film’s score which, unlike every other Star Wars movie, was not done by John Williams, but instead by Michael Giacchino (Doctor Strange). There’s also nothing about the film’s infamous reshoots or why they were necessary.

Along with “The Stories,” Rogue One A Star Wars Story also has “Rogue Connections,” a four-and-a-half-minute look at how this movie has nods to other parts of the Star Wars saga, as well as other bits of inside jokes, trivia, and Easter Eggs. But while this is also interesting, it’s also lacking. It doesn’t, for instance, point out how one of the Stormtroopers is voiced by Steve Blum, the voice of Zeb on Star Wars Rebels, or how the character Chirrut Imwe (IP Man‘s Donnie Yen) is a “Guardian Of The Whills,” a reference the original name for Star Wars: A New Hope, which was Adventures Of Luke Starkiller, As Taken From The Journal Of The Whills, Saga I: The Star Wars. What makes this even more annoying is that there is a longer, and more complete video about this subject on StarWars.com (which you can see here).

There are also some noticeable absences on the Rogue One A Star Wars Story Blu-ray/DVD combo pack and DVD. For starters, there are no deleted or extended scenes, which seems odd given the aforementioned reshoots and how there were scenes in the trailers that weren’t in the movie. Granted, director Gareth Edwards (Godzilla) has said there were no deleted or alternate scenes, just a couple that had some different small bits, and some that were things just made for the trailer. But given how there was a second Star Wars The Force Awakens Blu-ray released months after the first, and how it had extras the original edition didn’t, you’ll understand why I’m slightly skeptical.

The Rogue One A Star Wars Story Blu-ray and DVD also don’t have a commentary. Though if they had, I wouldn’t want it to just be Edwards, I’d want members of the cast included, especially Felicity Jones (Inferno) who plays the reluctant hero Jyn Erso, Diego Luna (Y Tu Mama Tambien), the rebel who’s her partner, and Tudyk, who’s funny.

Actually, now that I’ve said that, what I really want is a commentary by Tudyk as K-2SO, since the droid’s perspective on what happens in this movie would be hilarious, especially if he objects to how he’s depicted.

And as long as we’re dreaming, it would’ve also been cool if the Blu-ray and DVD of Rogue One A Star Wars Story had included the episodes of Star Wars: The Clone Wars and Star Wars Rebels that feature Saw Gerrera, a featurette about James Luceno’s Catalyst: A Rogue One Novel, which is a prequel to this prequel, and a second featurette on Marvel Comic’s upcoming adaptation of the movie, which will reportedly include plot points not in the film. 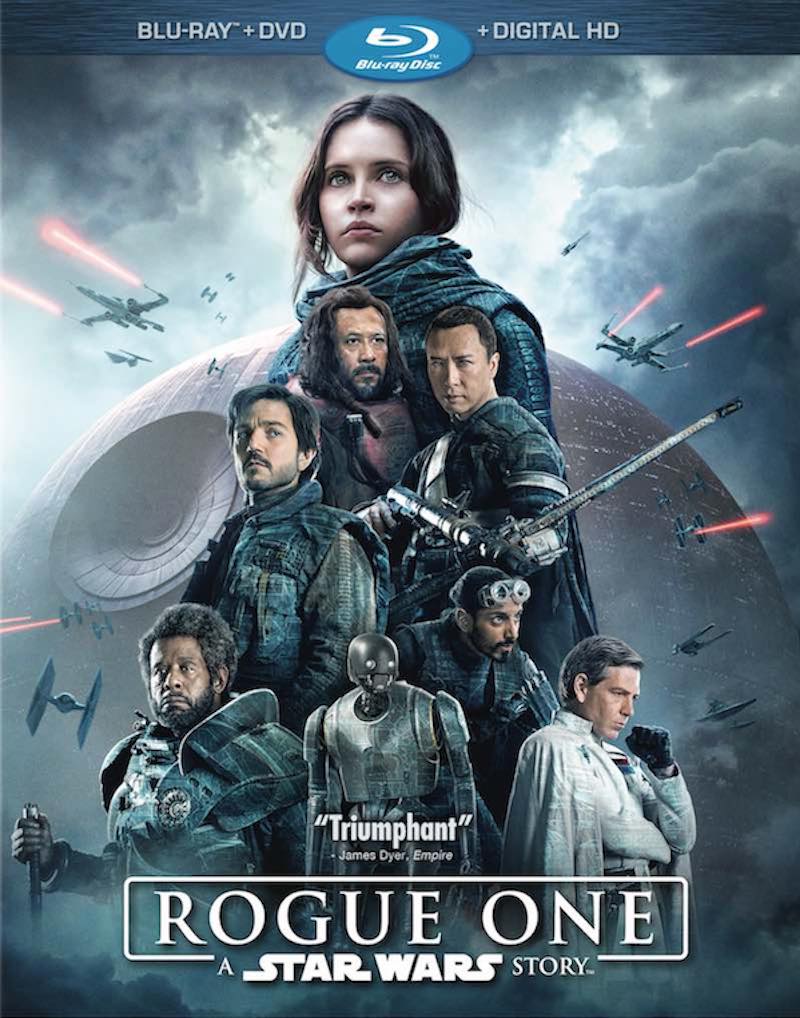 In the end, while the Rogue One A Star Wars Story Blu-ray and DVD may not be everything a fan might want, what’s most important, of course, is that it presents the movie as it was meant to be seen: with beautiful picture and vivid sound. It’s just too bad it’s not the complete picture, so to speak. 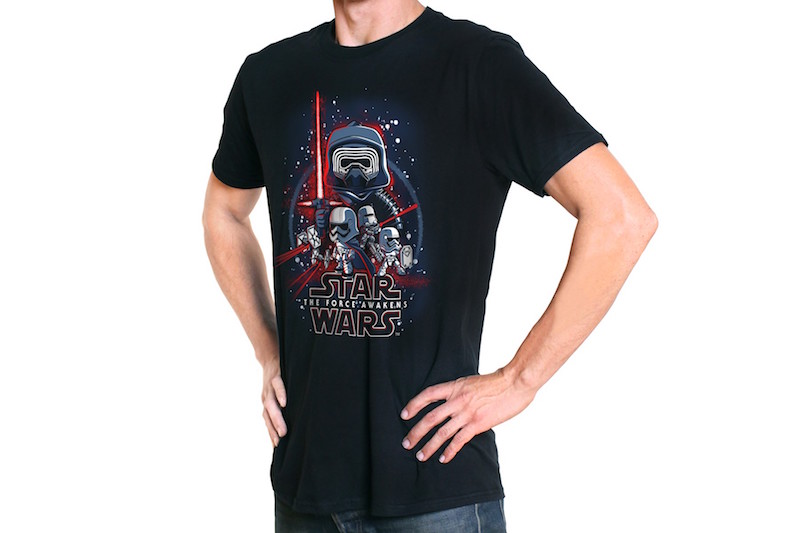 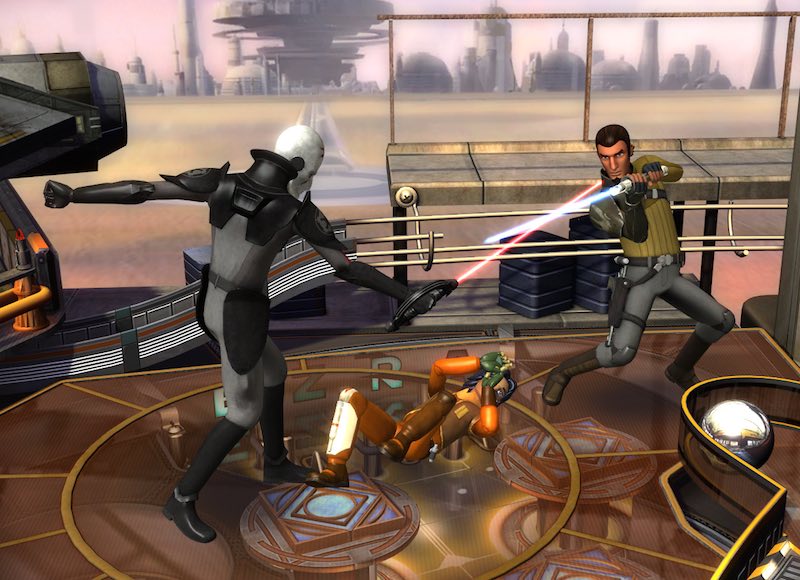 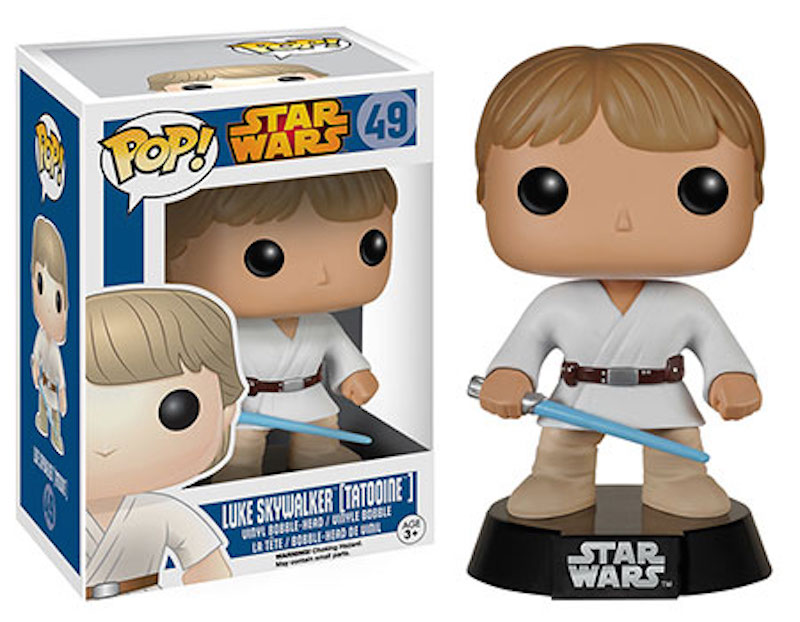