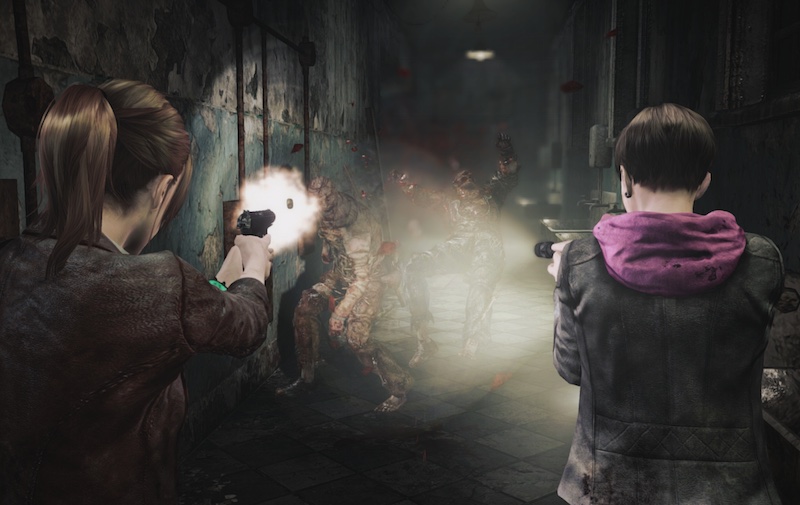 The original Resident Evil Revelations on the 3DS, PlayStation 3, Xbox 360, and WiiU was a somewhat simplified version of this series’ patented survival horror. But while Resident Evil Revelations 2 (PlayStation 4, PlayStation 3, Xbox One, Xbox 360) takes a similar approach, it also adds some intriguing additions that makes it even more fun and frightful. And that goes double if you buy the retail version, thanks to some small but cool additions. 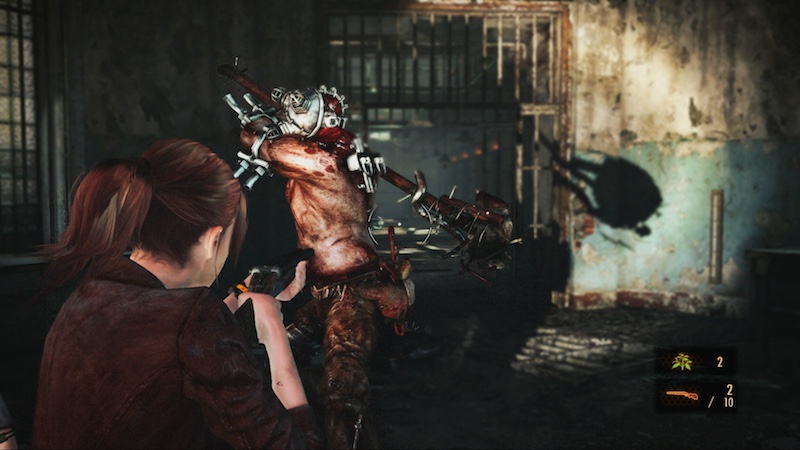 Set between the events of Resident Evil 5 and Resident Evil 6, Resident Evil Revelations 2 begins when Claire Redfield and Moira Burton (the daughter of Barry Burton from the original Evil) are kidnapped and wake up in a mysterious facility that looks like a man cave shared by Leatherface, Pinhead, and the guy from the Saw movies.

In many ways, Resident Evil Revelations 2 feels more like one of the original Evils than any of the recent sequels, and not just because the menus look rather dated. For starters, supplies are somewhat limited, as is how much you can carry at any one time (though, thankfully, your weapons don’t take up any of your supply slots).

But the biggest reason Resident Evil Revelations 2 feels like an original Evil is that it’s often more concerned with scaring you than letting you shoot up the place (though decidedly more during certain parts than others). Along with having things jump out at you, this also has some genuinely freaky, atmospheric, and often subtle music that’s thankfully used sparingly.

Which is not to say Resident Evil Revelations 2 is a total throwback to those old games. Besides having thoroughly modern controls, this also employs many of the mechanics that were added as the series progressed, such as being able to roundhouse kick someone after you’ve stunned them with a shot or two.

More importantly, Resident Evil Revelations 2 adds some new gameplay mechanics that I hope will become staples of this series. First off, while Claire has the guns, Moira has a crowbar she can use to open barricades doors…and enemies’ skulls. She also has a rather handy flashlight, which can not only be used to find hidden items, but it can also temporarily blind enemies when she shines it right in their eyes, leaving them open to her handy crowbar.

While these welcome new mechanics may make the Claire/Moira parts feel fresh, Resident Evil Revelations 2 gets slightly less interesting when you start playing as Barry (yeah, Moira’s pop from the first Evil) and Natalia (a mysterious little girl Barry meets on the island). For starters, by giving Barry more weapons and a chest-mounted flashlight, as well as more enemies to use them on, these parts become less scary and more shooty. Similarly, while Natalia can use a kind of radar to see where enemies might be, can crawl through small openings, and can find hidden items, she’s also as helpless as she is helpful, since her only means of defense is to clumsily toss a brick. 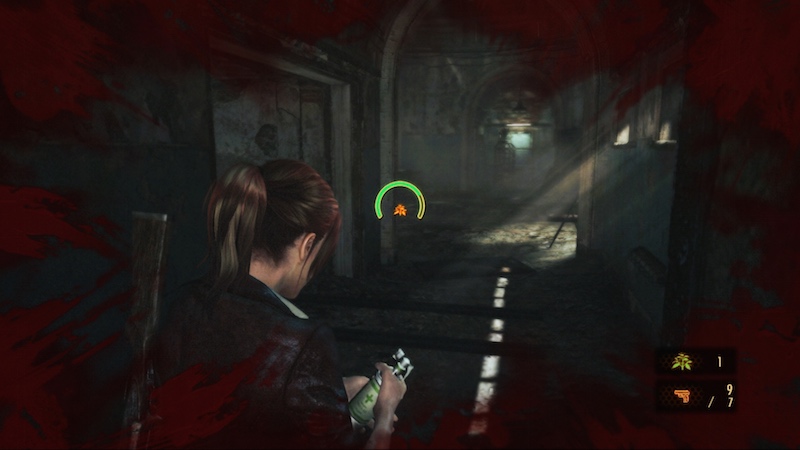 Though, having said all that, the Barry/Natalie parts of Resident Evil Revelations 2 do get points for having zombies instead of just crazy people who are really into extreme piercings, which is what Claire and Mora have to deal with.

Of course, dealing with any of this would be rough, were it not for the game’s intuitive controls, which are the best this series has ever had. Granted, the improvements are minimal, though still noticeable, when compared to the first Revelations, but they’re a decidedly less clunky than Resident Evil 6 or anything older.

Well, once you adjust them, that is. If you try to play Resident Evil Revelations 2 with the default settings, you’ll find the controls are way too loose. But once you adjust them — I suggest going to “1” for the camera speed and “3” for the aiming speed — they’ll feel just right.

While the story is the centerpiece of Resident Evil Revelations 2, the game also features a challenge mode called “Raid.” In it, you have to take out all the enemies in a level that’s based on a location from the single-player mode. But while you can chose different weapons and skills, as well as which character you want to run around as, there’s little variation as you progress, save for things getting progressively more difficult. Ultimately, it’s a bit too simplistic, even compared to the campaign, but for those looking for a challenge, it can be rather engaging.

As for the retail version of Resident Evil Revelations 2, while it has the four parts of the story mode that were previously available digitally, it also has a couple fun additions for those who enjoy “Raid” mode more than I did: two additional characters, Albert Wesker and Umbrella Security Service special agent HUNK, and the “Throwback Map Pack,” which has four stages from older games. It also includes alternate outfits for Claire, Moira, Barry, and Natalia.

But the best part about buying the physical version of Resident Evil Revelations 2 is that it comes with two spin-off missions. In “The Struggle,” Moira and a cranky old man go hunting in what ends up being a like a cross between a story mission and a round of “Raid,” while in “Little Miss,” Natalia and her evil twin try to sneak around, but it kind of feels like they’re Sam Fisher without the skills or weapons, and the monsters are like terrorists who are bad at paying attention. Not surprisingly, one of these is far more engaging than the other, and I don’t think you’ll be surprised which, but both have their moments and can be both fun and challenging. 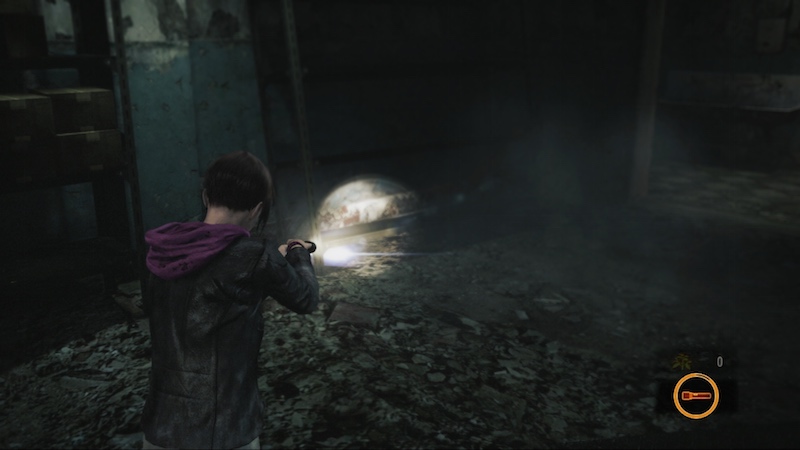 Clearly, if you’re going to get Resident Evil Revelations 2 — be it for the story, “Raid” mode, or both — the retail version is the way to go, thanks to the additional content. Well, until Capcom releases all of it digitally, that is. But regardless of how you buy this game, fans of this series won’t be disappointed in this classic-style Evil game. Sure, it’s not as deep or involved as a regular Resident Evil game, but with some welcome new mechanics, this spin-off does have the thrills and chills we’ve always gotten from this series. 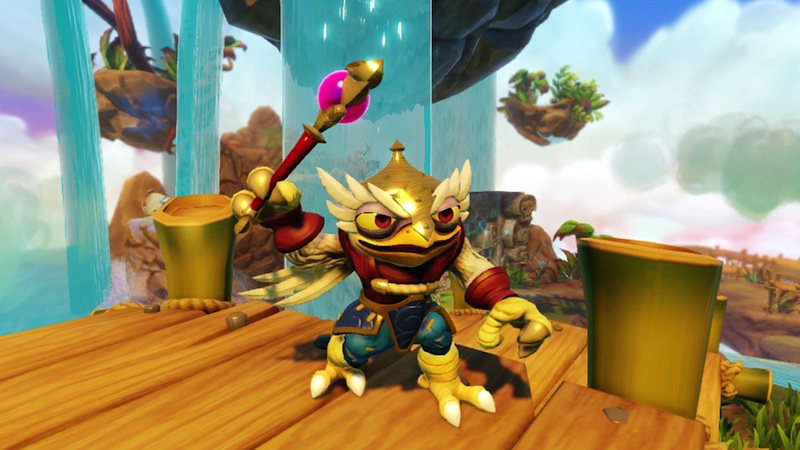 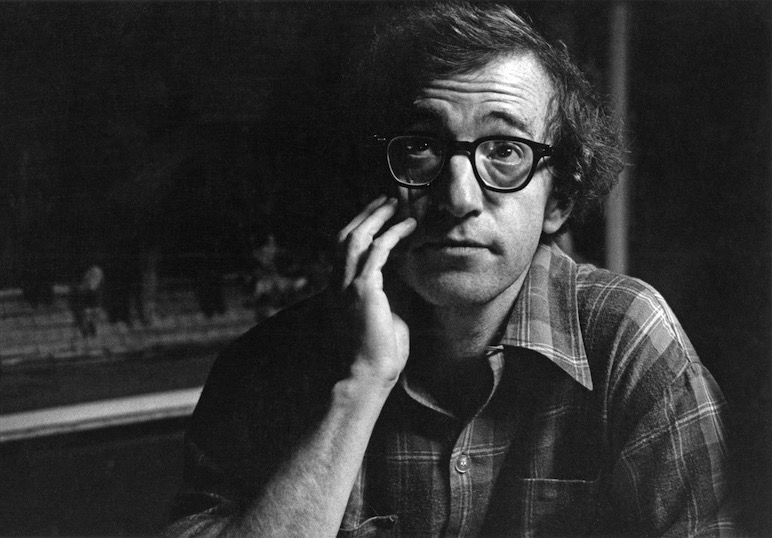 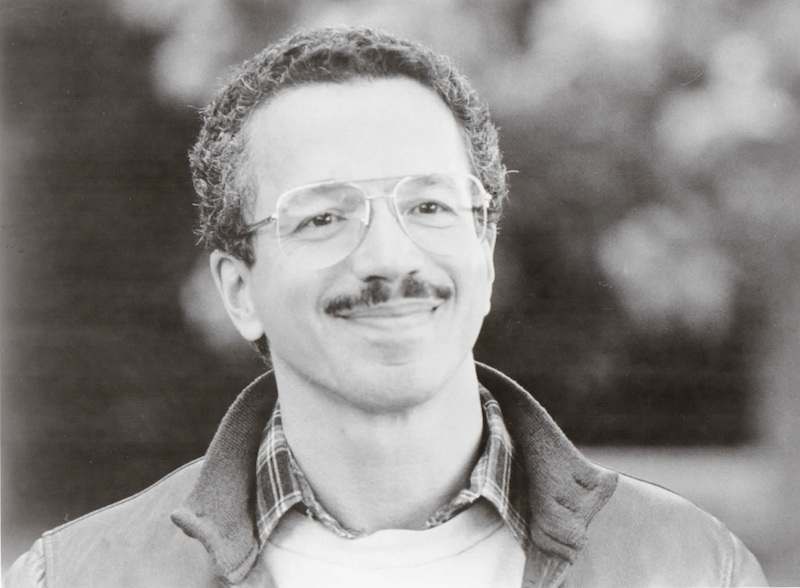