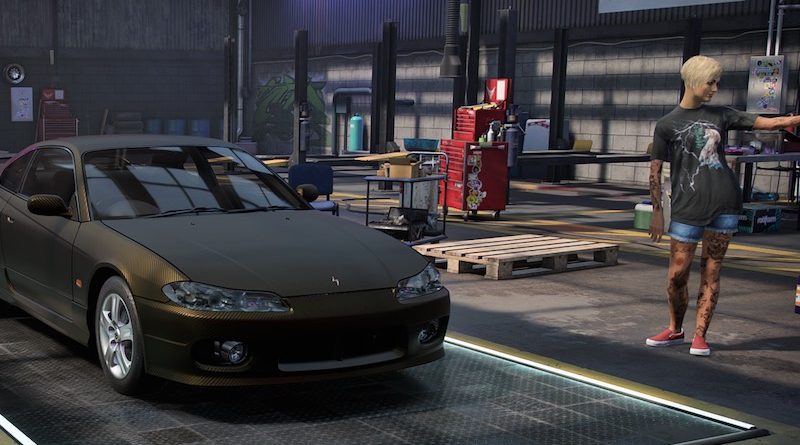 Four years after the disastrous self-titled reboot nearly destroyed it forever, and two years after somewhat redeeming itself with Payback, the Need For Speed series of open world street racing games has made a proper comeback with Need For Speed Heat (Xbox One, PlayStation 4, PC), which is not only the best game in this series since 2012’s Need For Speed: Rivals, and the best installment on this generation of consoles, but the best racing game of 2019. 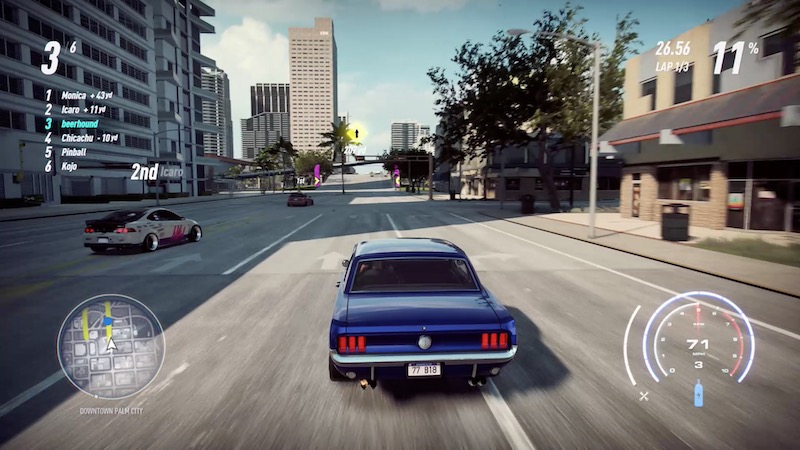 In Need For Speed Heat,

you’re trying to make a name for yourself, as well as some cash, by engaging in closed street races that are held during the day as part of a city-sanctioned race event called Speedhunters Showdown. But you’re also trying to up your rep, and your wallet, by doing some illegal street races at night, when the streets aren’t closed to commuters or, well, the police. Even cooler, you can switch between day and night simply by hitting a button, and can even quickly swap between the two when looking at the map for new events to enter.

Set in Palm City — which is so loosely based on Miami that it often resembles downtown San Diego — Need For Speed Heat takes full advantage of its open world structure by having wide, curvy streets that are perfect for racing. There’s even a handful of jumps, though never to the point where this feels like an off-road game or an episode of The Dukes Of Hazard. More importantly, the courses they make from those spacious and curvaceous roads are well planned, allowing for a good mix of turns and straightaways.

Good thing Need For Speed Heat‘s controls are spot-on. Your tires grip the road the way, well, tires should, and this has none of the oversensitive steering we’ve sometimes had to suffer through in this series.

The aforementioned day / night structure also keeps things interesting. Not only are the races different — daytime events tend to be multi-lap races, while at night you’re mostly doing point-to-point runs — but the latter are also somewhat unpredictable. During one I ran, the driver in first place side-swiped a car-carrying truck, which caused it to skid out in such a way that it blocked the road. 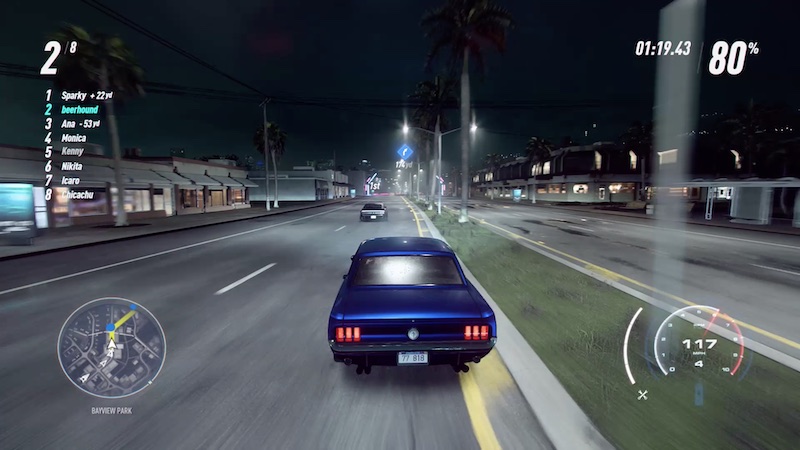 and aggressive, when it’s dark out. So much so that I never got pulled over during the day, even though I drove past them multiple times. At night, however, I usually got chased after finishing just one race, and sometimes while I was in the middle of one.

Good thing Need For Speed Heat has numerous safe houses you can hide out in until the heat dies down. It’s just annoying that doing this automatically switches the game to daytime, and that no matter what safehouse you go into, you start the next day at the main garage in the center of town.

It’s a pattern with Need For Speed Heat; while it has its issues, some are more like differences of opinion than design flaws or mistakes.

Take the nitro tanks you can use for a quick boost. Unlike other racing games, Need For Speed and otherwise, tapping the nitro button doesn’t give you a short burst of speed, nor can you then tap it again for another quick rush. Instead, hitting the button uses the entire cannister, and you have to wait until it fully recharges before you can use it again. 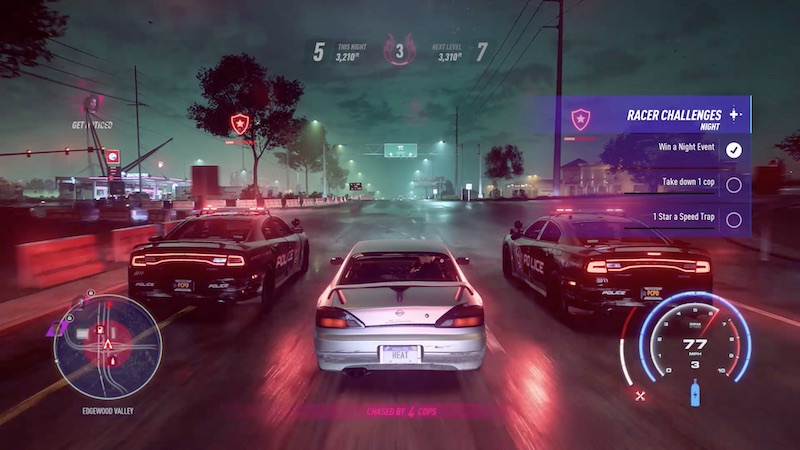 though only a little, that the streets of Palm City are rather empty at night. Almost like it’s a holiday weekend and everyone’s gone out of town. Especially since weaving in and out of traffic would’ve made nighttime races even more dangerous, challenging, and thus exciting.

Need For Speed Heat also, like so many open world racing games, has you driving from one event to the next. Which is fine, I guess, though cruising around in this game isn’t nearly as relaxing as it was when you did in the French and Italian countrysides of Forza Horizon 2.

Now, there are fast travel points in Need For Speed Heat: the aforementioned safe houses. So you need not drive everywhere. But you have to find them to unlock them first, even when you do, it would still be more fun if you could just go from one race to the next. Especially seeing as there’s not a whole lot else to do in Palm City. Unlike the aforementioned Forza and its sequels, you don’t earn extra dollars by, say, knocking over street lights or narrowly avoiding a head-on collision with oncoming traffic.

Need For Speed Heat also doesn’t have the depth that have been de rigueur in recent racing games. You can’t adjust the controls to make this more of a simulation, nor is there an optional suggested driving line, and if you screw up, well, you stay screwed, since this doesn’t have a rewind function. Though, again, this is more a preference than a problem, says the guy who never uses the driving line or the rewind button when I play racing games. 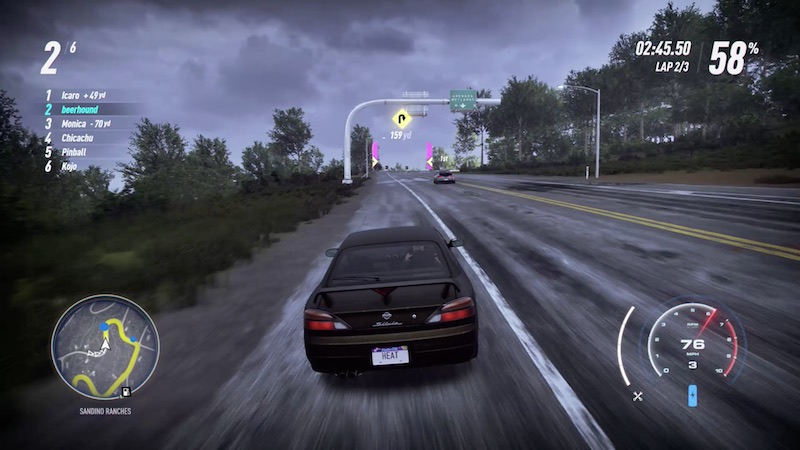 It can also — to the chagrin of some and the relief of others — be rather forgiving. Cutting corners doesn’t incur any penalties, while hitting most barriers, poles, and other obstacles doesn’t slow you down, let alone stop you. Well, unless you hit a whole bunch of them; driving lengthwise through a brick wall will slow you down.

While some issues in Need For Speed Heat are debatable, it does have some problems we can all agree are bad. Like how you can’t buy new cars from the garage, you have to leave and go to a dealership. Or how you have one friend who keeps bugging you to race, dammit, while another keeps suggesting that you just drive around, enjoy the sights. Or how, if you go to the spot in the city where there’s an event at another time of day, you can’t hit a button and automatically switch from day to night or night to day and run the race.

The mini-map in Need For Speed Heat could also use some adjusting. During races, your competition is indicated by white, arrow-shaped outlines that resemble the ship in Asteroids. But unlike space, which is black, black as night, the streets and buildings on your mini-map are white and light grey during daytime races, which makes it hard, at a glance, to see how far ahead, or behind, you are during a race. 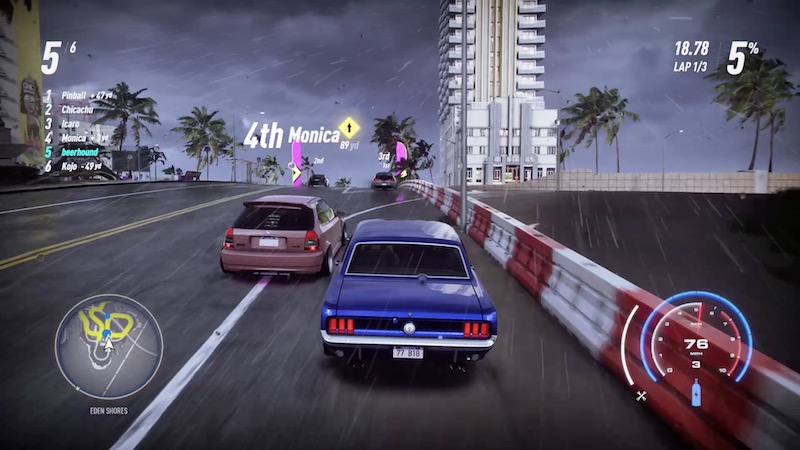 and differences of opinions, Need For Speed Heat still manages to be a strong street racer, the best this series has offered in far too long, and the strongest racing game of the year. More importantly, it’s a solid comeback for a series that has not only surrendered its first-place trophy to the Forza games every year since this console cycle began, but is also different enough from that series that this won’t have you wondering where you put your copy of Forza Horizon 4. 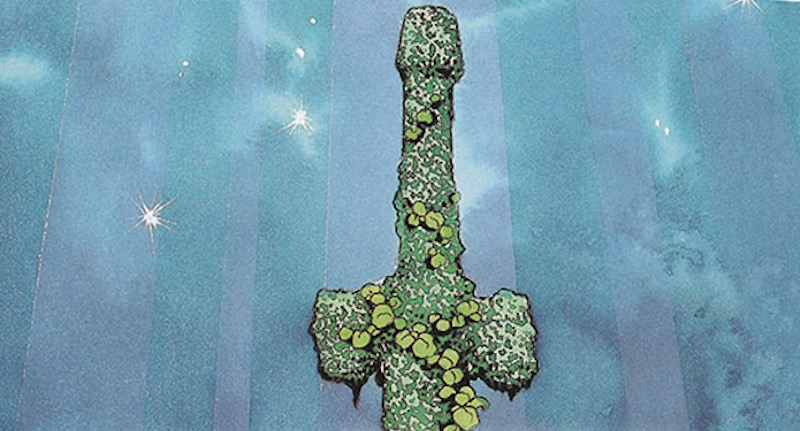 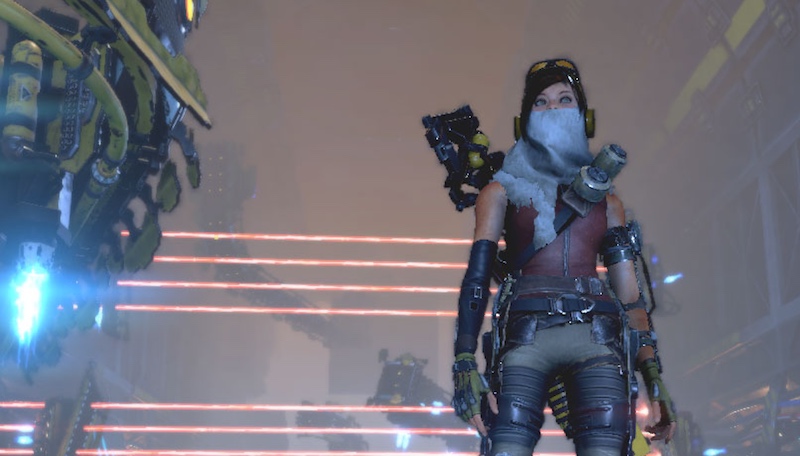 One thought on “Need For Speed Heat Review”