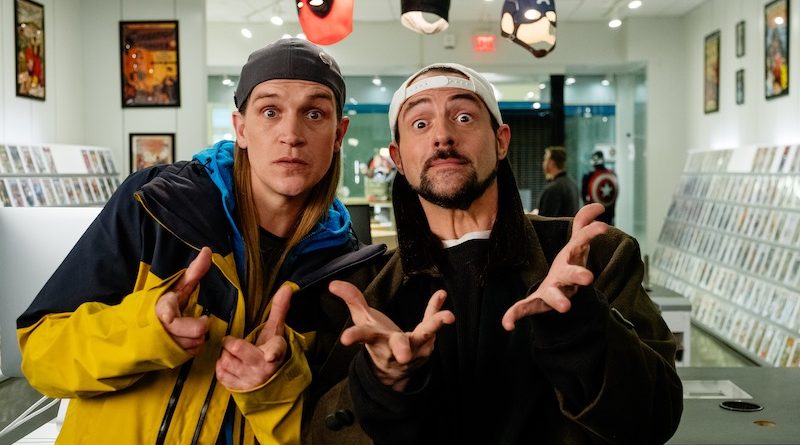 Long before the Avengers movies got heroes from multiple movies to join forces, Kevin Smith pulled it off, and almost as well, with 2001’s Jay And Silent Bob Strike Back, in which the titular two-some were joined by characters from such previous Smith films as Clerks, Chasing Amy, and Mallrats. And now he’s doing it again with the indirect sequel Jay And Silent Bob Reboot. But while it’s good to see the guys again, it’s hard not to wish both the film and the Blu-ray and DVD collections for it were a little better. 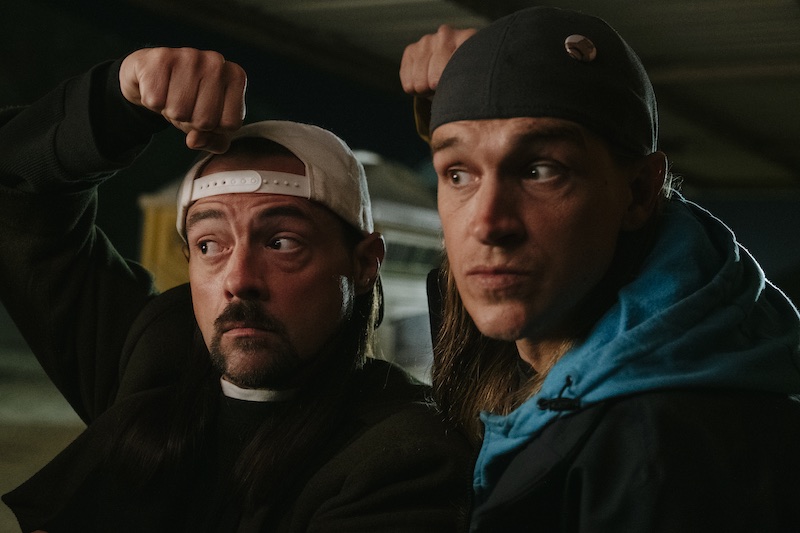 In Jay And Silent Bob Reboot,

Smith’s uncommunicative alter-ego Silent Bob and his hetero life-mate Jay find out that a new Bluntman And Chronic movie is in the works, and that a lawyer working for the studio has also legally stolen their names and likenesses. So, of course, they head back on the road to Hollywood to stop the film and get their names back.

It’s just too bad it never quite jells. While Jay And Silent Bob Strike Back was just as silly and self-indulgent, it worked as a wacky road picture. Jay And Silent Bob Reboot, by comparison, seems like a series of only somewhat connected scenes. And while it does have some emotional moments that ring true — and hint at what could’ve been a better made movie — and it is a fitting sequel to Strike Back, it’s not enough to add the cohesion it clearly needs.

As for the Blu-ray and DVD versions of Jay And Silent Bob Reboot, both also come up short. While they have some good extras, they’re also missing some key ones.

For starters, this doesn’t have any of the original trailers, which are an essential part of any movie collection. Even more perplexing, they don’t have a commentary track by Smith and other members of the cast. Thanks to Smith being so talkative, brutally honest, and funny, the commentaries on Jay And Silent Bob Strike Back, Mallrats, and Dogma Blu-rays and DVDs were highlights of those collections, so it seems downright odd that this wouldn’t have one as well. 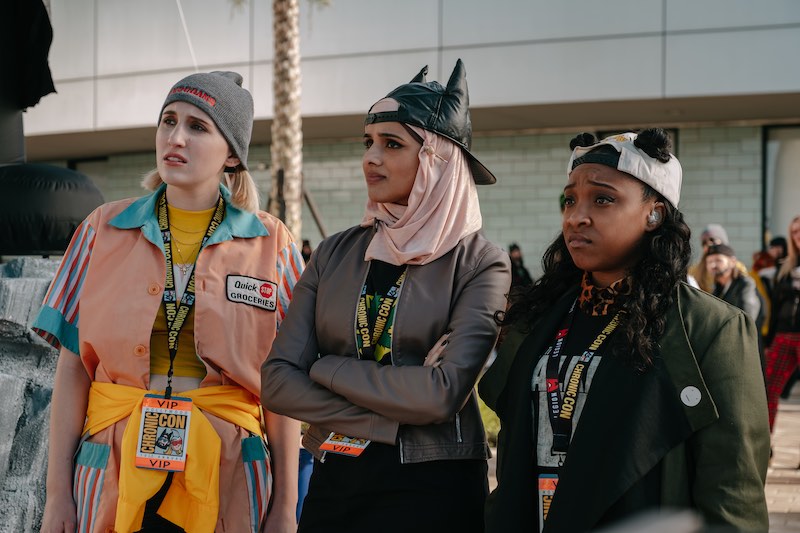 Though what this could really use…

is a Pop-Up Video-style on-screen commentary that points out all the references and cameos and other inside stuff. Y’know, like who’s that guy outside Mooby Burger?

While the Jay And Silent Bob Reboot Blu-ray and DVD may not have everything fans of the film would want, what they do have is interesting and informative.

First up,  there’s an hour of “Cast Interviews” with the cast and crew. And not just the main cast and returning characters, either; there’s quick chats with some of the actors who do cameos, including Chris Hemsworth, Melissa Benoist, and Joe Manganiello. Plus, by talking to so many people who worked on this film — albeit not for very long, even Smith — this also nicely serves as a de facto making-of featurette.

Next, the Jay And Silent Bob Reboot Blu-ray and DVD has “Kevin And Jay Interview Cast & Crew,” in which Smith and Jason Mewes do their own interviews with the cast and crew, often on-set. This serves as a nice companion piece to “Cast Interviews,” especially since it includes people such as Rosario Dawson who weren’t included in the other featurette.

The Jay And Silent Bob Reboot Blu-ray and DVD also has nearly ten minutes of “Bloopers.” And while blooper reels are usually all the same, and funny, this one is a little different, if only because it’s longer and has more cursing.

Lastly, the Jay And Silent Bob Reboot Blu-ray and DVD has “Hair Reel,” 1:43 minutes of footage of people fixing Jay and Silent Bob’s hair. Which is funny but seems like it should’ve been part of “Bloopers.” 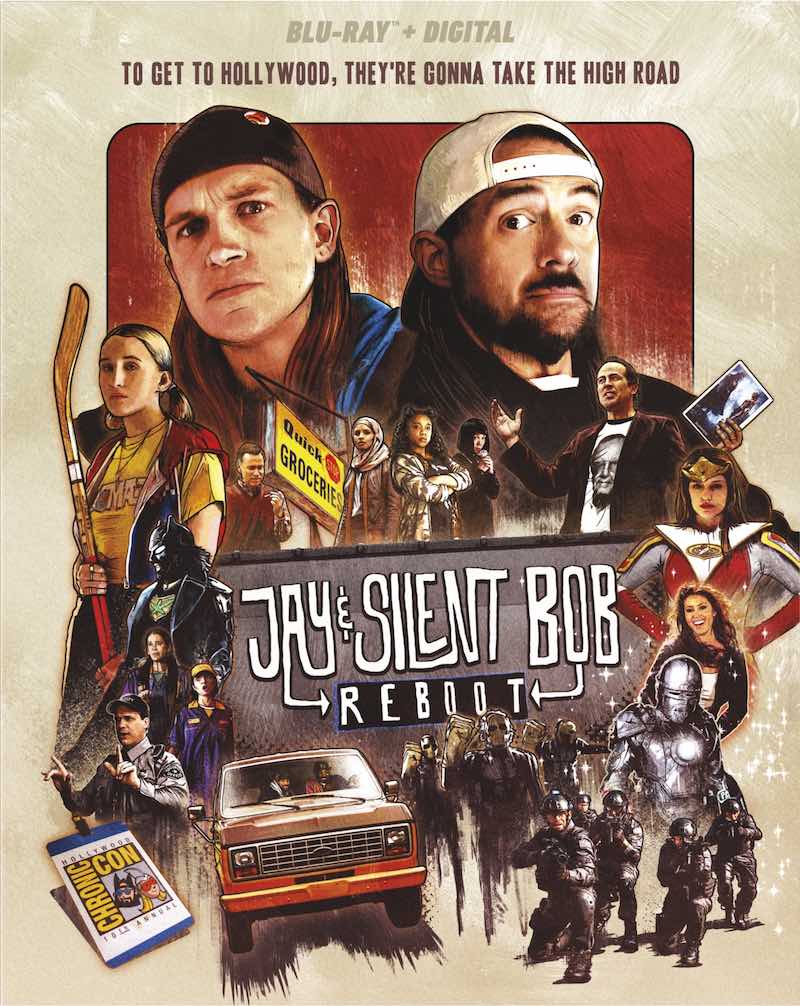 For fans of Jay, Silent Bob…

and other people they’ve been interacting with since 1994’s Clerks, Jay And Silent Bob Reboot isn’t as good as it could’ve been, and the same goes for the Blu-ray and DVD. Maybe things will be better when 2018’s Jay And Silent Bob: The Next Generation is released on 16K HD Ultra and Cyborg Attachment.