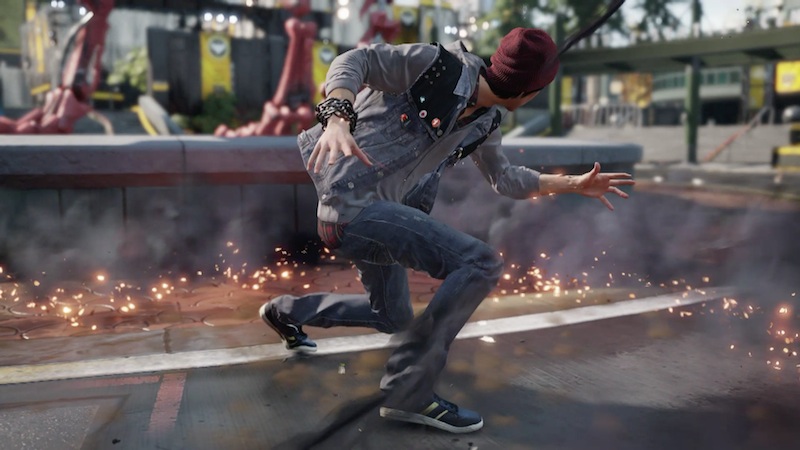 inFAMOUS: Second Son is a comic book-inspired, third-person, open-world action game made by Sucker Punch for the PlayStation 4. It’s also the third installment of a series that’s never had much of an impact on me either way. Sure, 2009’s inFAMOUS and 2011’s inFAMOUS 2 were fun — even if the latter wasn’t called inFAMOUS 2: Electric Boogaloo — but neither was fun enough to make me want to play them twice.

Happily, inFAMOUS: Second Son is just as much fun as its predecessors.

Or maybe that should that be: Sadly, inFAMOUS: Second Son is only as much fun as its predecessors.

Eh, six of one; half a dozen of another. 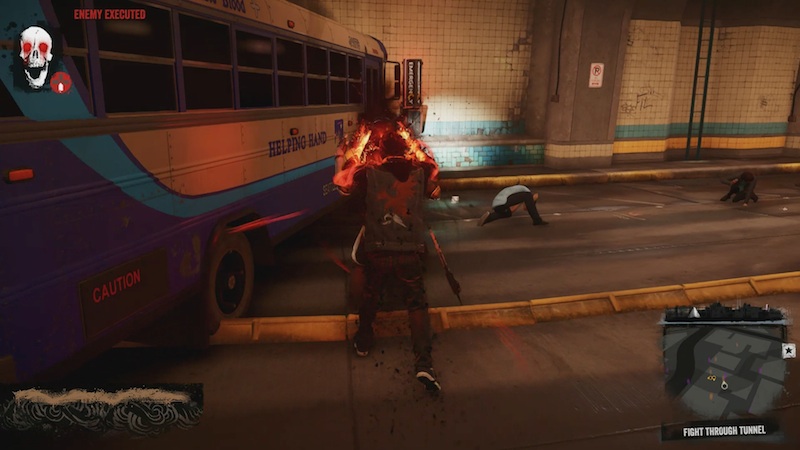 Seven years after the events of inFAMOUS 2, a politically-minded graffiti artist named Delsin Rowe accidentally becomes superpowered. But instead of fighting crime or saving the world, Delsin uses them to save his friends and drive the military out of Seattle.

As with the previous games, inFAMOUS: Second Son has you using your superpowers, and ability to parkour like a master, to run a series of errands that usually involve killing someone or destroying something. But unlike in the other games, where the hero’s powers were based on electricity — which made him a low-rent version of Spider-Man’s nemesis Electro — Delsin gets his power from a succession of sources. Starting with smoke.

No, not that kind of smoke. Regular smoke, like you get from smokestacks and burning cars.

So what can Delsin do with that smoke? Aside from turning into a cloud so he can dash through porous surfaces or into vents, he can also whack people with a God Of War-like chain (sans the blades), or do some powerful attacks that will make a certain someone say “HULK CALL COPYRIGHT LAWYER!”

But the most useful piece of Delsin’s smoke-based arsenal is his ability to shoot concentrated bits from his hands (it’s a lot more effective than it sounds). It’s why, like inFAMOUS and inFAMOUS 2, inFAMOUS: Second Son often plays like a third-person shooter.

It’s something that continues even when Delsin’s powers transition to another source, such as neon. Except then he shoots concentrated light (though, as with all his power sources, he secondary attacks change based on the source of his juicing). 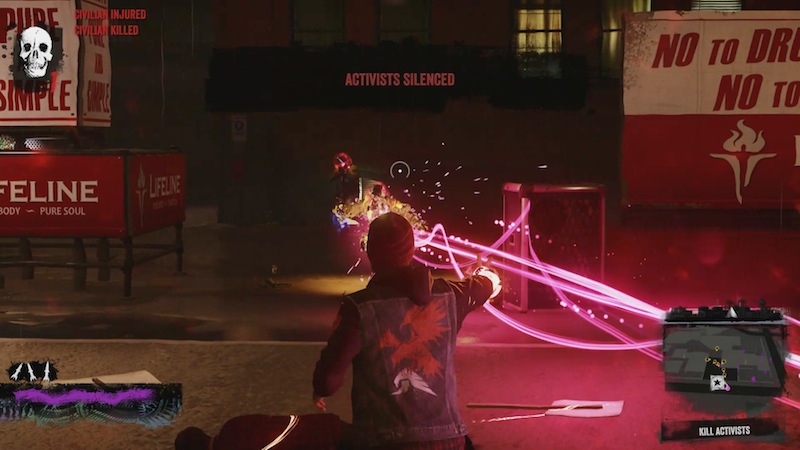 Of course, this shooting stuff is where, in the previous games, things went awry. Mostly due to the overly loose controls. Not so for inFAMOUS: Second Son. Because of the PlayStation 4’s much improved controller, aiming is a lot more fluid and accurate than before. Which means this often plays like a good third-person shooter.

The thing is, Delsin can’t go all willy-nilly with his attacks. Which is bad for him, but good for you since it adds a bit of strategy. Though he can always whack people, his shooting attacks need to be replenished. When he’s using smoke, for instance, he powers up using the aforementioned smokestacks and burning cars, both of which are commonplace in this version of Seattle. But since some power sources have to recharge before hooking you up again, and others are single use, you sometimes have to plan ahead. Or, at the very least, occasionally run off in the middle of a fight to get your fix.

While combat is better in inFAMOUS: Second Son than it was in the earlier installments, getting around — which was the highlight of those games — has gotten weaker. This is largely because even when Delsin powers are based on electricity, there aren’t any power lines criss-crossing the city for him to slide on, nor are there third rails of subway lines to similarly ride, which were a great way to get around before.

Even when the neon gives him super speed that lets him run up the sides of buildings, it’s still not as much fun as sliding effortlessly along electric wires.

Then there’s the issue of the side missions, which include killing specific people, destroying surveillance cameras, and leaving your graffiti in strategic spots. But as with the other inFAMOUS games, most of them in Second Son end up feeling more like busy work. 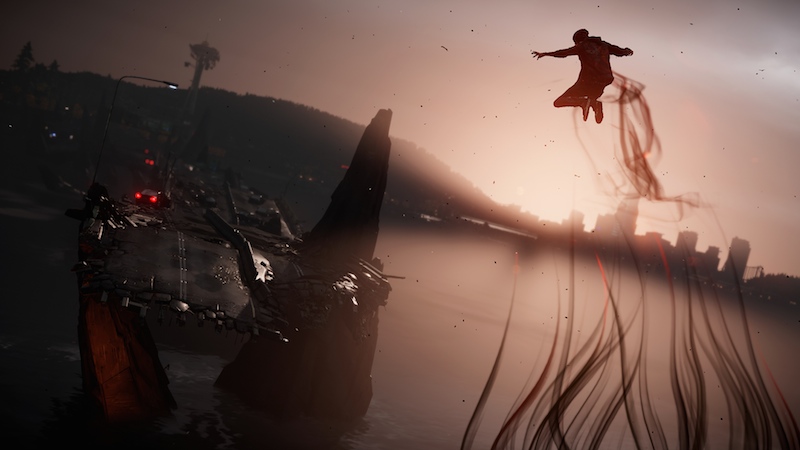 It also doesn’t help that the map can be rather unhelpful, even misleading at times. Not intentionally, mind you, but it’s sometimes so inexact that it makes it hard to find the site of your next objective. Which isn’t good for an open world game with numerous side quests and collectibles.

As a result of having good combat but a bad traveling and a crap map, the real fun of inFAMOUS: Second Son comes when you’re running amok with little concern for your current mission…or human life for that matter. If you’re someone who likes to blow shit up, you’ll get a real thrill when Delsin starts laying waste to the military and their outposts, especially he does it with one of his Hulk-ish moves.

That Delsin does Hulk-ish moves is rather apt since, like the previous inFAMOUS games, Second Son explores the dichotomy of man by having you make moral choices. Besides impacting the story in both big and small ways, these decisions also raise or lower your karma, giving you access to specific upgrades you unlock as you level up. But, as before, this really only works well if you go full hero or full villain, since that’s only way you can unlock the most powerful upgrades.

It’s just too bad that the story isn’t all that engaging, or that Delsin is such an unsympathetic, self-righteous twit. 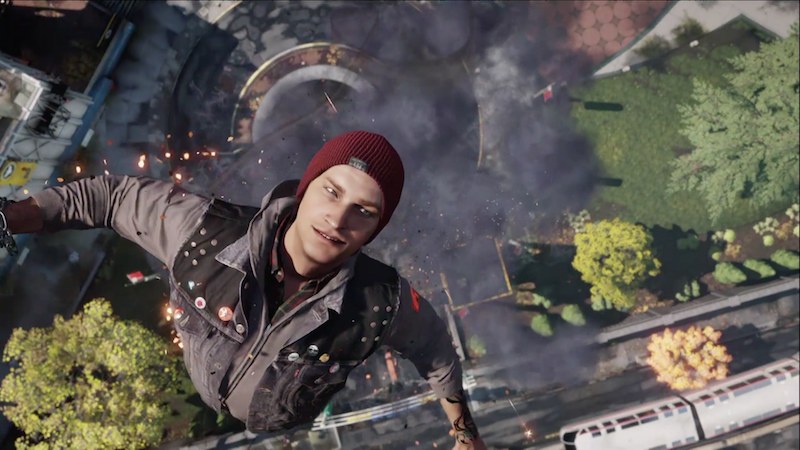 As the first installment on the PlayStation 4, inFAMOUS: Second Son also takes advantage of the system’s unique functions. Such as the controller’s touchpad, which you swipe when you want to tear certain doors off their hinges. Or the controller’s speaker, which cleverly makes a “whoosh” when you’re absorbing some power.

Then there’s the visuals, which are, naturally, more detailed than those of previous inFAMOUS games. Though while they are improved, they’re nothing that will blow anyone away. But, having said that, the game never suffers from any slow down, even when the air is full of both soldiers and what’s left of their barricades.

In fact, the only visual issue I had with inFAMOUS: Second Son is one that’s so common in games these days that I now just cut and paste this paragraph into almost every game review I do: the type is too small. Unless you sit really, really close to your TV — y’know, like your mama told you not to — you’ll have a hard time reading the text that tells you what you’re supposed to do next, what things improve in the upgrade menu, and what people are saying via the subtitles. 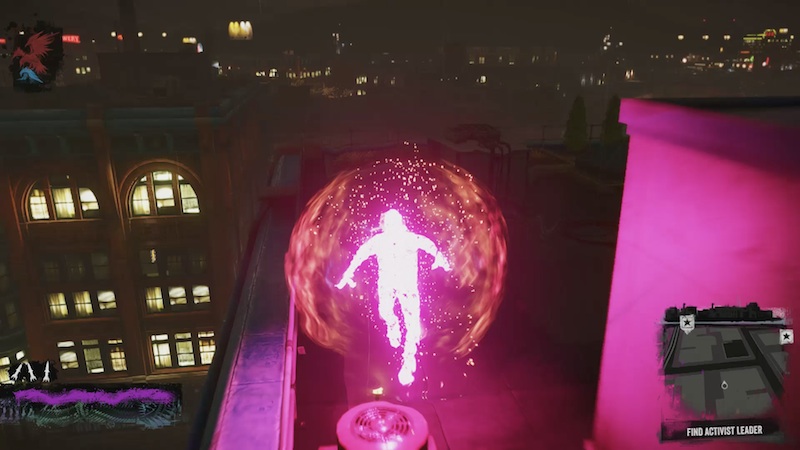 Ultimately, how much you will or won’t enjoy inFAMOUS: Second Son can be measured by how much you did or did not enjoy the previous inFAMOUS games. Especially since every step forward Sucker Punch made with the combat is countered by step back in getting around. But while this isn’t as exhilarating as Spider-Man 2, it’s also not as frustrating as Spider-Man 3. Instead, it’s a solid superpowered bit of mayhem that will entertain…even if it doesn’t engage. Just don’t expect me to play it more than once. 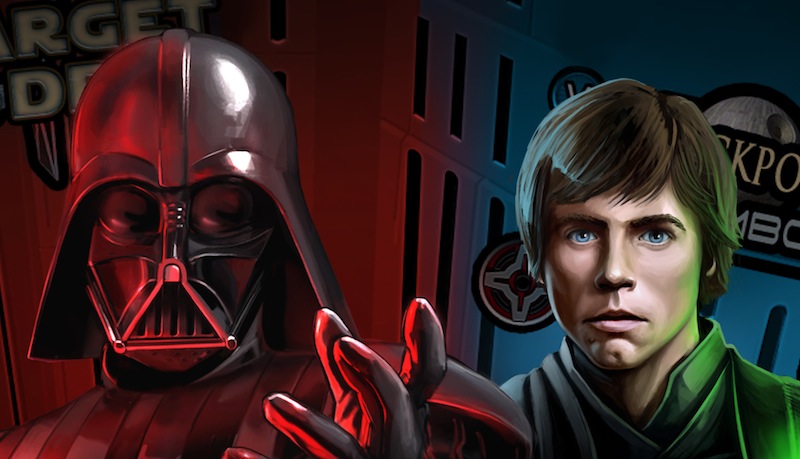 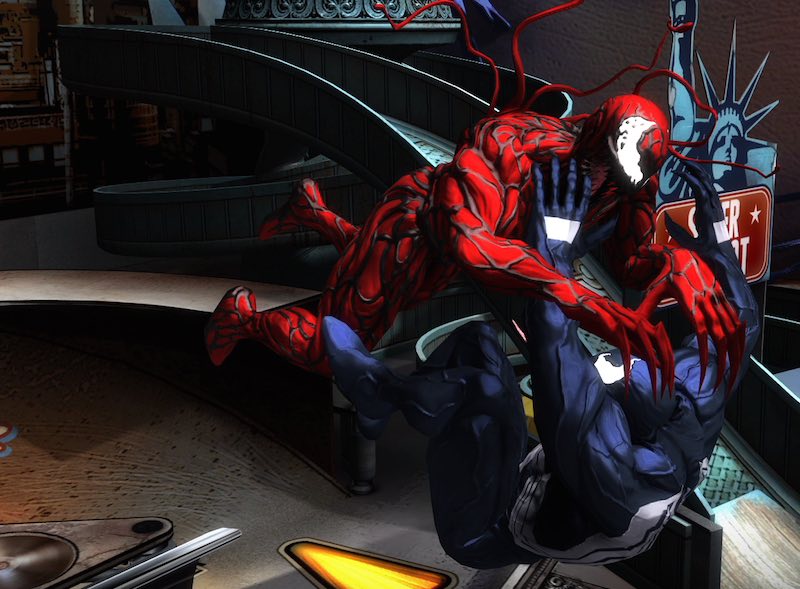 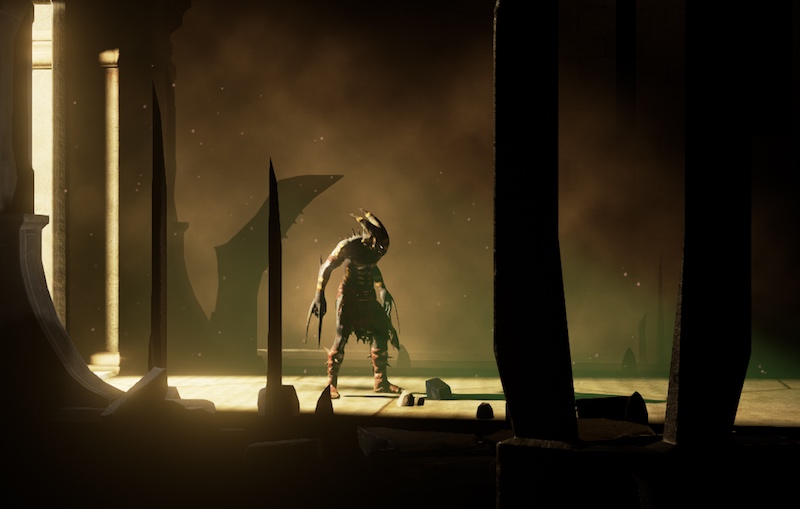 Shadow Of The Beast Review