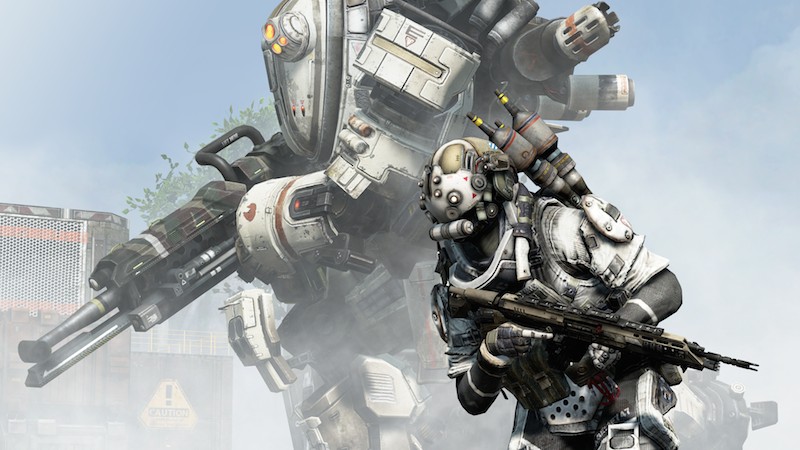 In the online-only, multiplayer-focused, first-person, overly-hyphenated, sci-fi shooter Titanfall, soldiers use futuristic weapons and giant robot suits to battle it out on alien worlds. And with the game being made for the Xbox One, Xbox 360, and PC by Respawn — y’know, the people who, at their old jobs, made Call Of Duty 4: Modern Warfare and Call Of Duty: Modern Warfare 2 — it’s not surprising that this game boasts smooth, intuitive controls and addictive multiplayer.

But what might surprise you is that, while Titanfall can only be played online and with other people, the game’s story-driven campaign is still as engaging as its competitive counterpart. 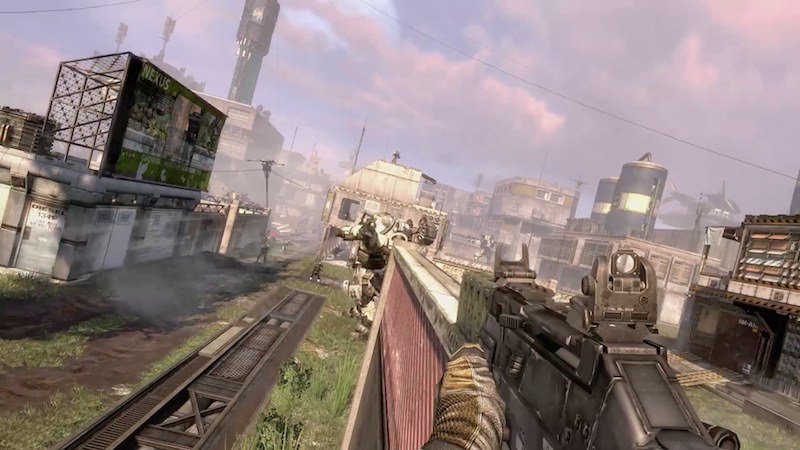 Set years after mankind has conquered space travel and thus created a new frontier, Titanfall has you caught in the middle of a war. But unlike a lot of shooters, this doesn’t have you running from firefight to firefight (which is too bad, since you can parkour around the world like a Persian prince), but instead drops you into an open battlefield with just your wits and your weapons to protect you.

Well, until they deliver your Titan, that is. A giant, weaponized mech, a Titan is kind of like the suit worn by Iron Man’s pal War Machine if he was the size of King Kong. And just as loyal. Besides the fact that no one else can commandeer your Titan (though enemies can jump on its head and do some damage to it), you can also — if you don’t feel like driving — command your Titan remotely to hold a position and fire on any nearby enemies, or do the same as it follows you around. It’s kind of like having a dog…if dogs had machine guns and missile launchers. 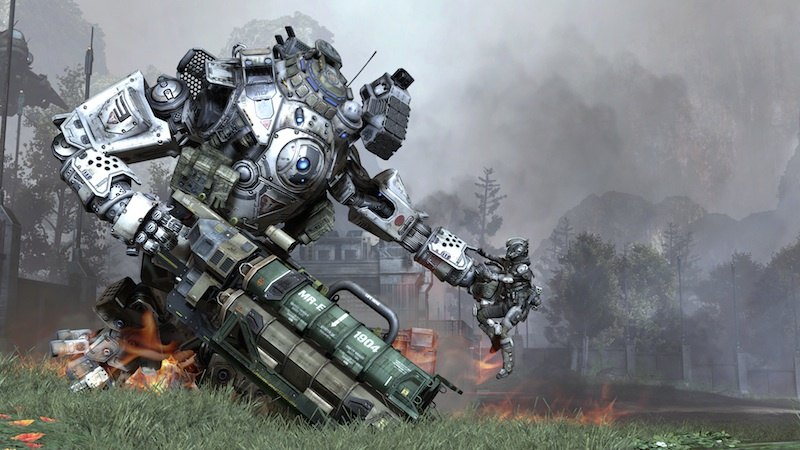 Except a dog is harder to control when you first get it. For the most part, the controls you use when running around as a person are the same as when you’re in your Titan. The only difference, in fact, is that the button used to toss grenades as a person will instead launch a barrage of missiles from the Titan’s shoulders, while the double jump button for people makes a Titan do a quick dash move. Which really isn’t that different when you think about it.

You can also customize your Titan just like you can your soldier, with different weapons and perks that unlock as you level up. This isn’t just in the competitive multiplayer, though; it applies to the campaign as well. Which isn’t that surprising since the campaign is really just another multiplayer mode.

I’ll explain. While Titanfall has a story, its campaign tells it through a series of missions that you play with other people. Except that unlike in a co-op game, where you and other people team-up to fight computer-controlled enemies, each campaign mission in Titanfall plays like a multiplayer match, with all the same rules. In the first mission, for instance, you’re playing the capture-three-points game “Hardpoint,” while the second mission is a round of the “Team Deathmatch”-esque kill-’em-all “Attrition,” and so on.

But playing Titanfall’s campaign isn’t just like playing a bunch of multiplayer matches in a row. Besides giving you mission parameters via voiceover as the match is loading, there are also mid-mission updates that further the story. In that first mission, for instance, you’re not just told to capture some points, you’re told to capture points so you can get some much needed fuel for the fleet. It may not sound like much, but it manages to make the campaign feel less like multiplayer and more like a story-driven, single-player, co-op campaign…that you just happen to play with and against other people.

Though it does help that, even if you don’t win a match in the campaign, the story still progresses. 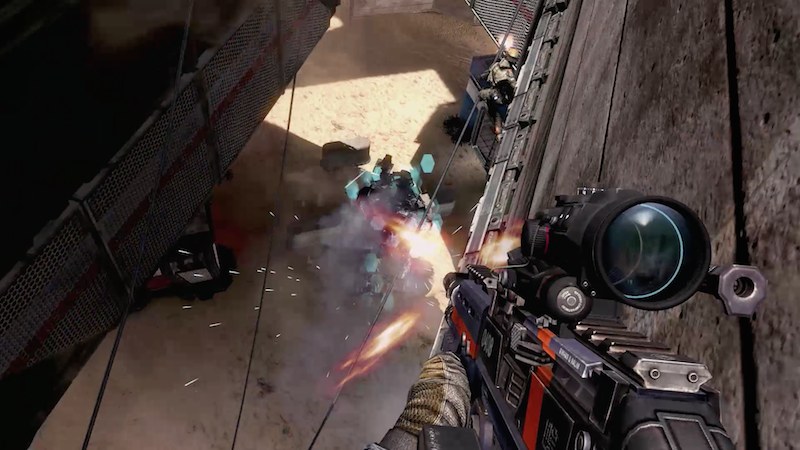 Now, as someone who doesn’t play well with others, I would’ve preferred a single-player option, one where you play with computer-controlled bots. Especially since many of the issues I had with Titanfall’s campaign, compelling though it may be, stem from it being online- and multiplayer-only. For example, playing with other people works well if everyone plays the game correctly; if, for instance, they play the objective-based modes with the objective in mind, as opposed to playing like it’s “Team Deathmatch,” er “Attrition.” But as anyone who’s ever played online ever can attest, this doesn’t always happen.

It’s also not hard to think that the story could’ve been fleshed out more. Because it’s so determined to get you into the action as quickly as possible — admittedly, an admirable trait in an action game — Titanfall often eschews cutscenes and exposition. Which is kind of annoying, not just because it means you don’t form connections to any of the characters, but also because its scenarios, fiction, and setting are so enticing, you’ll want to know more than you learn in these little scraps of narrative. Especially since, instead of taking a cyberpunk approach, as you might expect when mechs are concerned, this has more of a gritty, realistic feel; something I haven’t seen much, save for in Hiroshi Sakurazaka’s novel, All You Need Is Kill.

Also, because you’re playing online and with other people, you can’t pause the game, which is a pain if you get a call from mom or nature. Adding insult to injury, finding matches in the campaign mode sometimes takes a while, and the game doesn’t always find you a match that picks up where you left off. Though it also, oddly, occasionally made me replay a mission that my team just won.

Of course, most of these complaints don’t apply to Titanfall’s competitive multiplayer mode. Which, admittedly, is the centerpiece of the game. Though what’s odd, given the developer’s pedigree, is that they’re not as deep as you might expect. 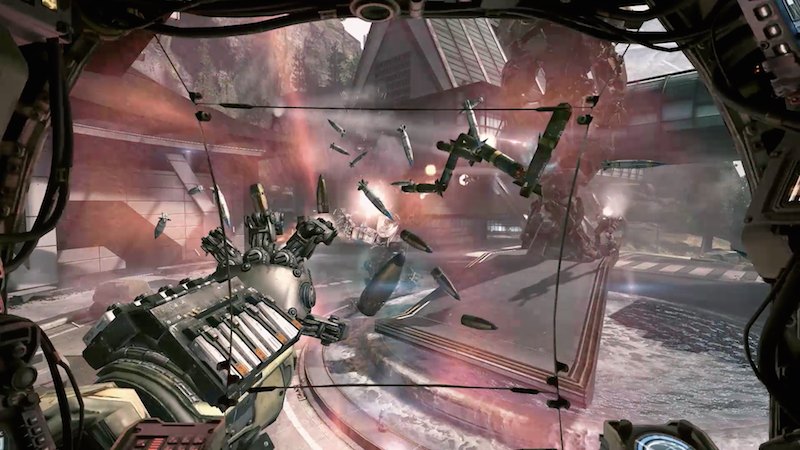 For starters, Titanfall’s competitive multiplayer only has five modes, all of which pit two teams of six against each other. Along with the aforementioned “Attrition” (in which the six players are augmented by A.I. soldiers) and “Hardpoint,” there’s also an “Attrition” variation called “Pilot Hunter” in which you only get points for killing other players, a second take on “Attrition” called “Last Titan Standing” in which your only get points for taking out the other team’s Titans, and the self-explanatory “Capture The Flag.” Though there also a sixth option, “Variety Pack,” which randomly picks a mode.

With three of the five being versions of “Attrition,” Titanfall comes up a little short in the variety department. But while the ones they did include work well, and work well with the parkouring and the Titans, this could use a couple more objective-based modes. Though having said that, the one I’d most love them to add is a Titan-on-Titan version of “Attrition.”

Adding a little variety to competitive multiplayer — and I do mean “little” — is a modifier mechanic called Burn Cards. These can give you more powerful versions of your existing weapons, double your XP, even give you bionic legs so you can run faster. Except that, at the beginning of a match, you have to pick which you’re going to use. And once you use them, they’re gone. Well, until you randomly get it again. But while it’s a nice idea, to be honest, half the time I forgot to use them.

Then there are issues that apply to both the competitive and campaign multiplayer modes. For instance, Titanfall doesn’t have nearly as many weapons or weapon modifiers and attachments as other shooters. Though this ends up being something of a mixed blessing because while you don’t get bogged down looking for just the right gun, it could use a couple more options.

Some shooting fans might also miss the auto-targeting that’s commonplace in Call Of Duty, Halo, and other games, but is absent from Titanfall. Though once you realize that you can’t rely on it anymore, you get used to not having it pretty quickly. 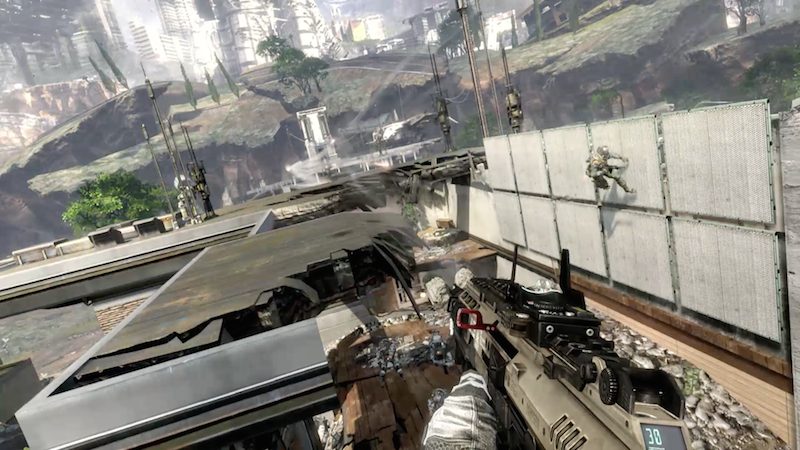 That said, there are also elements of both the campaign and competitive multiplayer that make Titanfall a rather spectacular shooter. Sure, piloting a giant mech suit is pretty kick ass, especially when you rampage over a bunch of soldiers who get in your way. But it’s actually the parkouring aspect that helps set this apart. Not just because you can run up or along walls, but because the maps have to account for these motions as well, and have thus been designed with verticality in mind. Granted, the Respawn crew know how to make multiplayer arenas where there’s plenty of pathways and no safe hiding spots. And they’ve obviously made the ones here so the Titans can go almost anywhere, emphasis on “almost.” But in also accommodating the players ability to parkour, they’ve added a third dimension, literally, where most multiplayer maps really just have two.

Titanfall also has a good variety when it comes to the maps, with areas that range from a big grassy field with some destroyed luxury homes and a small city with narrow streets to a military based and a Titan factory. Though it also helps that while these maps are big — so big that you can run off into a corner to wait for your Titan to be delivered — they’re not so big that you ever feel that far from the action. Though it does help that both your pilot and your Titan have a decent foot speed, even without bionic legs.

It also helps that, like in Call Of Duty, Halo, and other great multiplayer shooters — and unlike the more frustrating Battlefield series — Titanfall is somewhat forgiving when it comes to how much damage you take before you die. Not only does your Titan have a shield, which makes it tough, though obviously not impossible, to take down, but the rechargeable health you have as a person means you won’t get killed without being able to put up a fight. As a result, even those of us who, as I said earlier, don’t play well with others will be able to get to play these matches for a little while before being shot in the head by some twelve-year-old who plays this game when he should be sleeping. 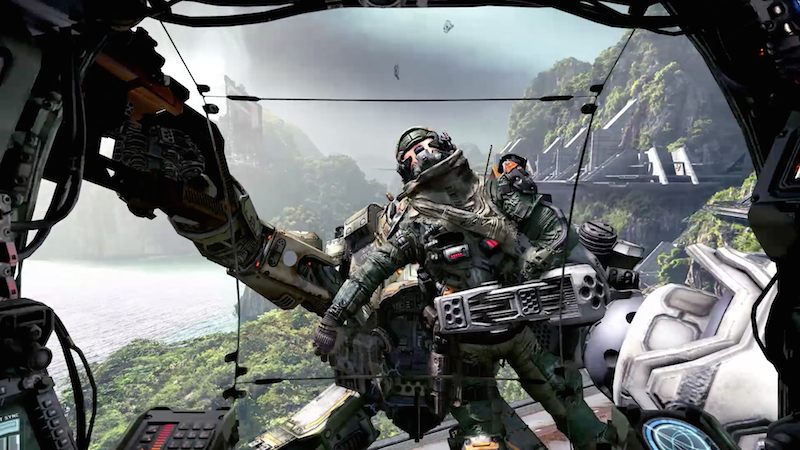 But the best thing about Titanfall is that the controls are smooth, responsive, and intuitive. It’s one of the reasons — along with the frantic firefights, the addictive competitive multiplayer, and the compelling campaign — why Titanfall might as well be called Call Of Duty: Spacial Warfare. Or Call Of Duty…In Space if you’re a fan of The Muppet Show.

Either way, all of it is why Titanfall isn’t just the first great new franchise of this new generation, and a great first installment to what could be an addictive new series, but the best new sci-fi shooter since 2006’s Gears Of War. Which, when you consider who made it, isn’t really that big of a surprise after all. 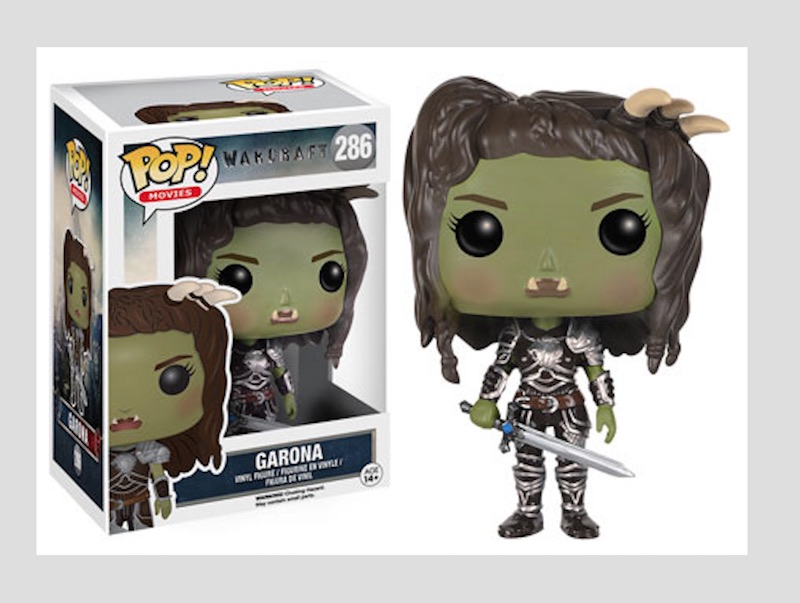 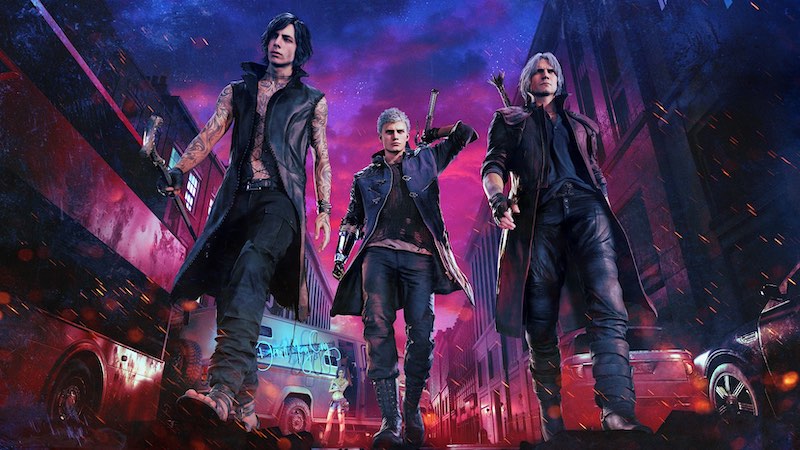 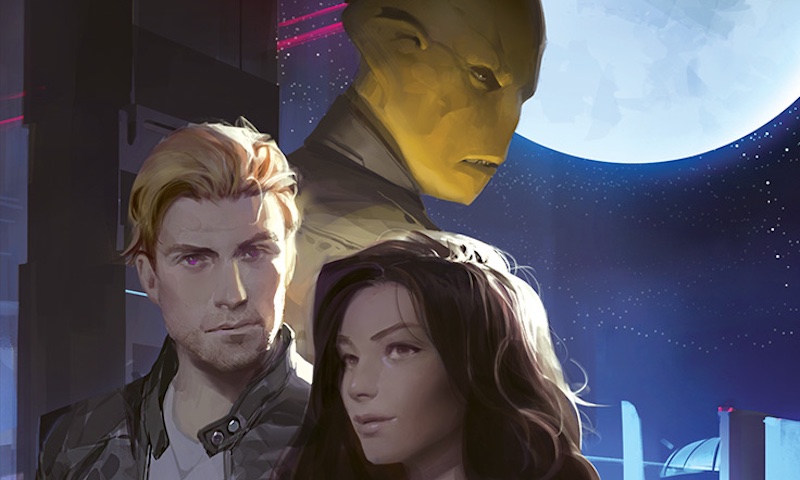