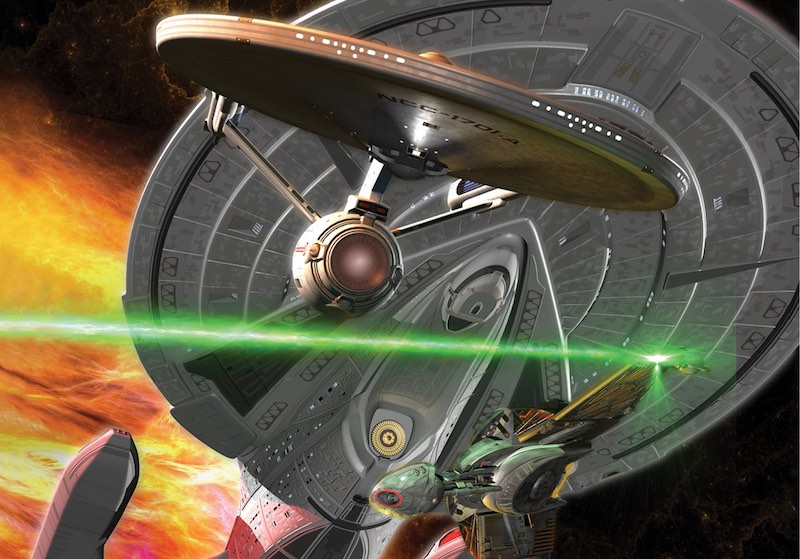 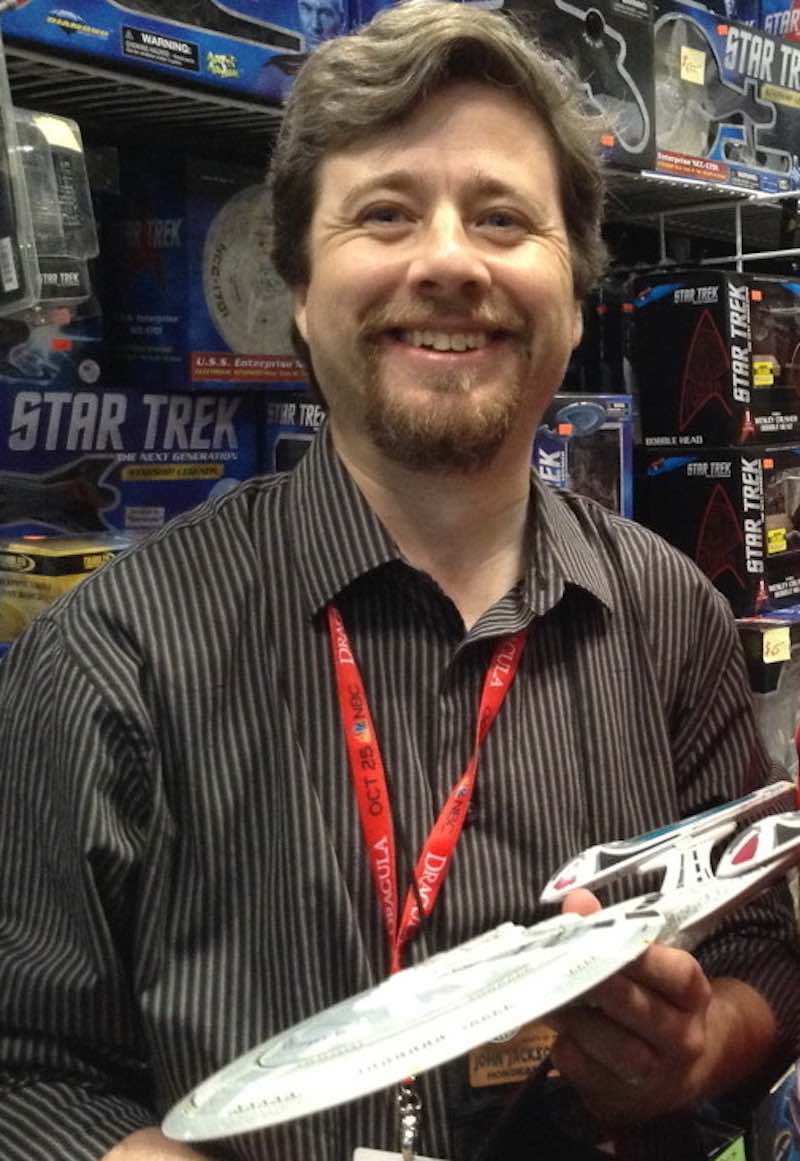 In a general sense, what is Star Trek Prey: Book One: Hell’s Heart about, and what is the whole trilogy about?

Star Trek: Prey is a sweeping epic trilogy spanning an entire century of the Federation’s relationship with the Klingon Empire. Hell’s Heart kicks things off by taking us back to the days following Star Trek III: The Search For Spock. After what befell Christopher Lloyd’s Kruge character in that movie, there’s a battle for control of the Klingon House of Kruge. There are winners to that battle, and losers, and Prey follows them all as they threaten first Kirk and then, a century later, the denizens of the Next Generation era.

As readers might expect from the sound of it, there’s a lot of material in here about the Klingon Empire across time. But we also get a sense of how that relationship has changed over time. There are sections that take place before the Khitomer Accords are signed; there’s quite a lot from a century later, after the Klingons and the Federation have been allies for a long time. William T. Riker — now an admiral in the current Next Generation novel timeline — is responsible for preserving that friendship, and he draws on Captain Jean-Luc Picard and Commander Worf of the Enterprise, his own crew aboard Titan, and even Ezri Dax’s Aventine in the attempt to do so as the political crisis we present spreads. The events of the trilogy touch a lot of lives, and we show that.

The next two novels follow immediately in sequence. It’s really one story, told across three novel-length chapters. I did write each book so it could be followed by someone who hadn’t read the earlier ones, but that’s clearly not the intended or most rewarding route.

Where did you get the idea for these books, and why have it extend into the timeframe of Next Generation?

I’ve always been a fan of such political thrillers as Seven Days In May, and one of my other favorite Trek movies, Star Trek VI: The Undiscovered Country, presented a conspiracy that fits right into that genre. I wanted to present one of my own, but to really spread out and show how wide the impact of a few critical events could be in undermining all that has been built between the allies. We stress-test the alliance and see how the players respond. Importantly, we have not just the space to do it, but the time in-continuity, as the trilogy takes place over a three-month period, one month per novel. So in a sense, we’re telling the story in real-time. It’s three months in 2016 for us, but it might well be called Three Months In 2386.

As to the timeframe, the intent was always to show the seeds planted in the distant past, which would bear their bitter fruit in the future. Kruge would have despised the alliance between the Federation and the Empire; we show characters who share that sensibility. And because so many characters in the Trek universe are long-lived, in several cases we’re able to follow players from one era into the next. There are some surprise 23rd Century guests who have an impact on things in the later time. 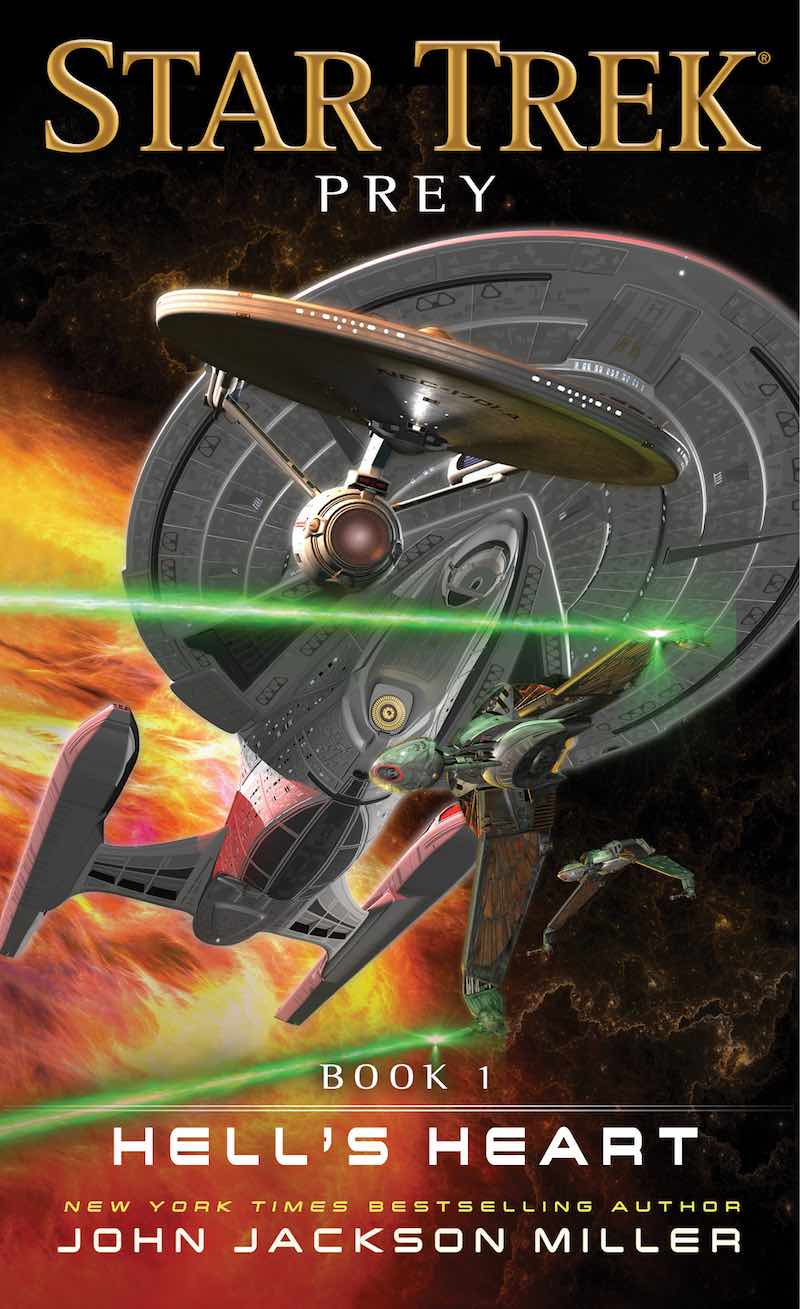 The original Star Trek series and movies had a bit of a different feel than those of Star Trek: The Next Generation. Did that make it difficult for you to write these books with a consistent voice? Because, unless I’m mistaken, you’ve previously written only one Star Trek book, the Next Generation one, Takedown. Or was that not a concern?

Certainly there’s a different feel to writing in the two time periods, and I took extra efforts to make sure I was in the proper mindset. This extended to leaving my home office to write the 23rd Century segments of Hell’s Heart; I decamped to external office space where I had only my original series research materials by my side.

But it also helped that I wrote a lot of the Original Series material early in the process, so it wasn’t tainted by references to what would come later, apart from the usual foreshadowing. It was certainly fun to work with the classic crew, of course. There’s actually a calming influence to being inside Spock’s head as you’re describing events. The Klingons are of course very energetic and aggressive; he sees them with analytical and philosophical eyes.

When did you first realize that this story either could or should be a trilogy, and what made you think that?

It was a trilogy from the outset. I wanted to challenge Klingon alliance with the Federation not just at the upper levels of government, but on the level of what the Klingon-on-the-street thinks, and that required a good deal of room to present. There are also several major new characters who have through lines in the trilogy, in addition to the starring roles for such characters as Worf, Riker, Picard, Tuvok, and Dax. There’s also the meatiest story arc in years devoted to Emperor Kahless, the clone of the great legendary figure of Klingon history. All of this — plus some sprawling surface and space battles — is the sort of thing you really need several hundred thousand words to tear into.

Were there any other trilogies — be it books, movies, games, or whatever — that you looked at for inspiration as to how to structure Star Trek Prey, and if so, what were they and what did they bring to the series?

As to the story structure itself, there’s probably too many influences to put my finger on any one. Did I learn about ending on a cliffhanger from Star Wars: The Empire Strikes Back, or from any of a number of novels that I have read? It’s hard to say.

But certainly I looked at the other Trek fiction for historical background and possible inspiration — both including, before, and after the seminal Destiny trilogy by David Mack — for inspiration. Michael Jan Friedman’s  Kahless novel was useful, and Keith R.A. DeCandido’s Klingon Art Of War helped with the lore. But then there were many technical works that were of use, like the Klingon Bird-Of-Prey Owners’ Workshop Manual, which informed locations for events, as did the works on Star Trek cartography; many places I depict can be found in those works. And, of course, Marc Okrand’s Klingon language works were essential.

There’s well over a year’s worth of work in these books, and a good deal of that time was devoted to research. Exhausting, but I’m delighted by the finished product. 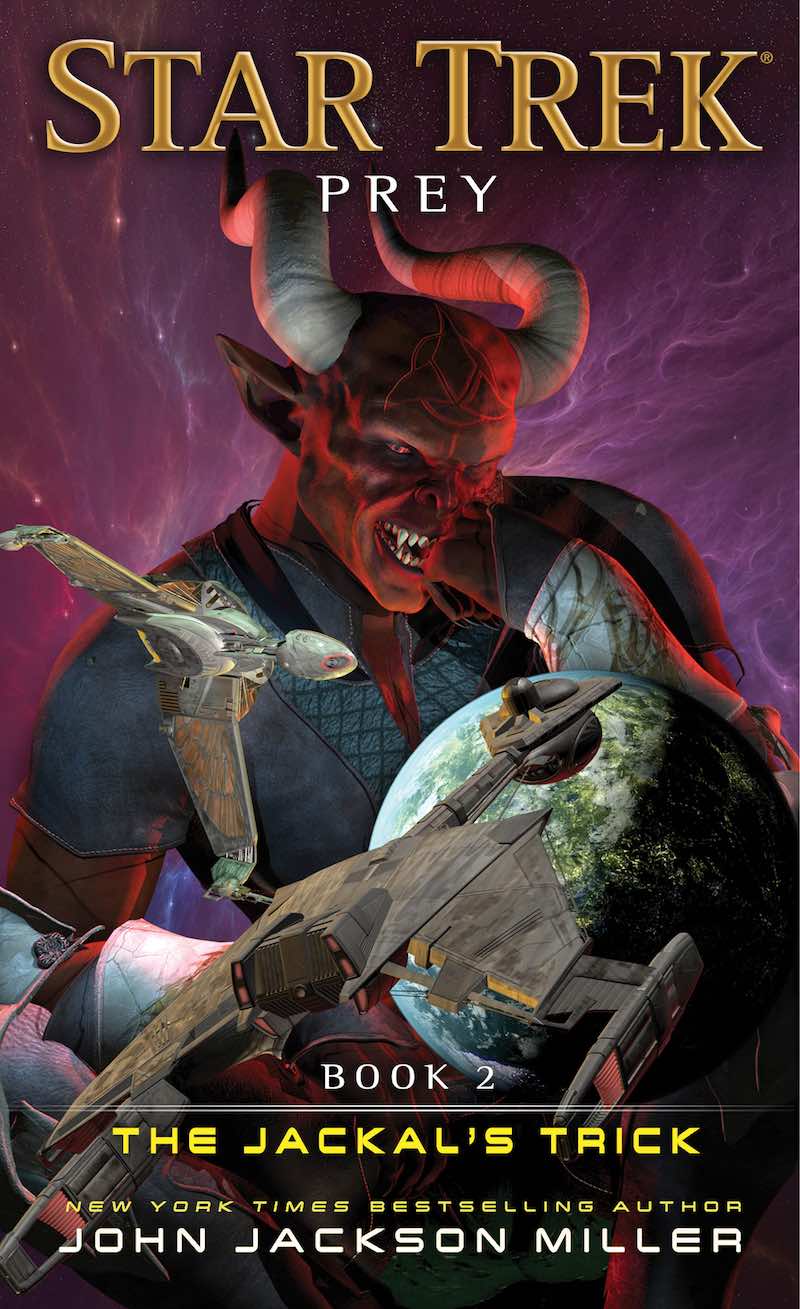 In writing it, did you take Star Trek Prey: Book One: Hell’s Heart to completion and then move on to the second book, did you write the three books simultaneously, or did you write a draft or two of the first book and then work on the second and the third before going back and finalizing everything?

I submitted a complete plot for all three books beforehand; almost a novel in itself. After working on it with my editor and with CBS, I started writing the novels in order and completed each one before going on to the next. That was really the only way to make sure I got it all done in time. And, remarkably, the plot managed to exactly fill the space I had planned for each book without much modification.

That said, because the proofreading cycles on the earlier books overlapped with the writing periods for the later books, I was able to make sure everything tied together snugly. So while I wasn’t writing all three books simultaneously, the fact that I often had all three books on my desk at various stages meant I could make sure elements I planted in one book were reflected in the others.

How often in writing the Star Trek Prey trilogy did you come up with an idea for the second or third book and realize that you had to go back and change something in an earlier one?

That wasn’t really an issue because of the aforementioned process. There was a case where I’d said one character had sons and daughters in Book One, but then, by Book Three, it had worked out that he’d only had sons. That was an easy fix. Likewise, as I settled on specific new Klingon terms — with the help of Felix Malmenbeck, who specializes in the language — I was able to go back through the earlier books and make sure the correct words were inserted.

Really, the fact that the novels are coming out in sequential months was helpful, because the schedule for quite a lot of the latter-stage proofreading is governed by when the novel releases. So while Book One was finished in late 2015, I still had the chance to make alterations into the summer of 2016.

So do you think the Star Trek Prey trilogy could work as either a trilogy of movies or a limited run TV series? And let’s, for the sake of this discussion, assuming the laws of time and space have been rescinded so you can get William Shatner back from 1982.

I wrote my first novella, Star Trek: Titan: Absent Enemies, to play like a single episode of the TV series, while Star Trek: The Next Generation: Takedown was more like a two-episode sequence or a movie. Prey is really a full-season long story, of the sort one could imagine being done in the streaming age; there’s many episodes worth of material here, many big moments spread across the whole thing.

And certainly, it would be fun in this imaginary version to have everyone involved. I was tickled to get to include Kirk and Spock in this, and it took on a more solemn feel after Leonard Nimoy passed. As I wrote at the end of the trilogy in my acknowledgments, Star Trek has been with me my entire life, and getting to draw upon so many different eras in this story was an honor. 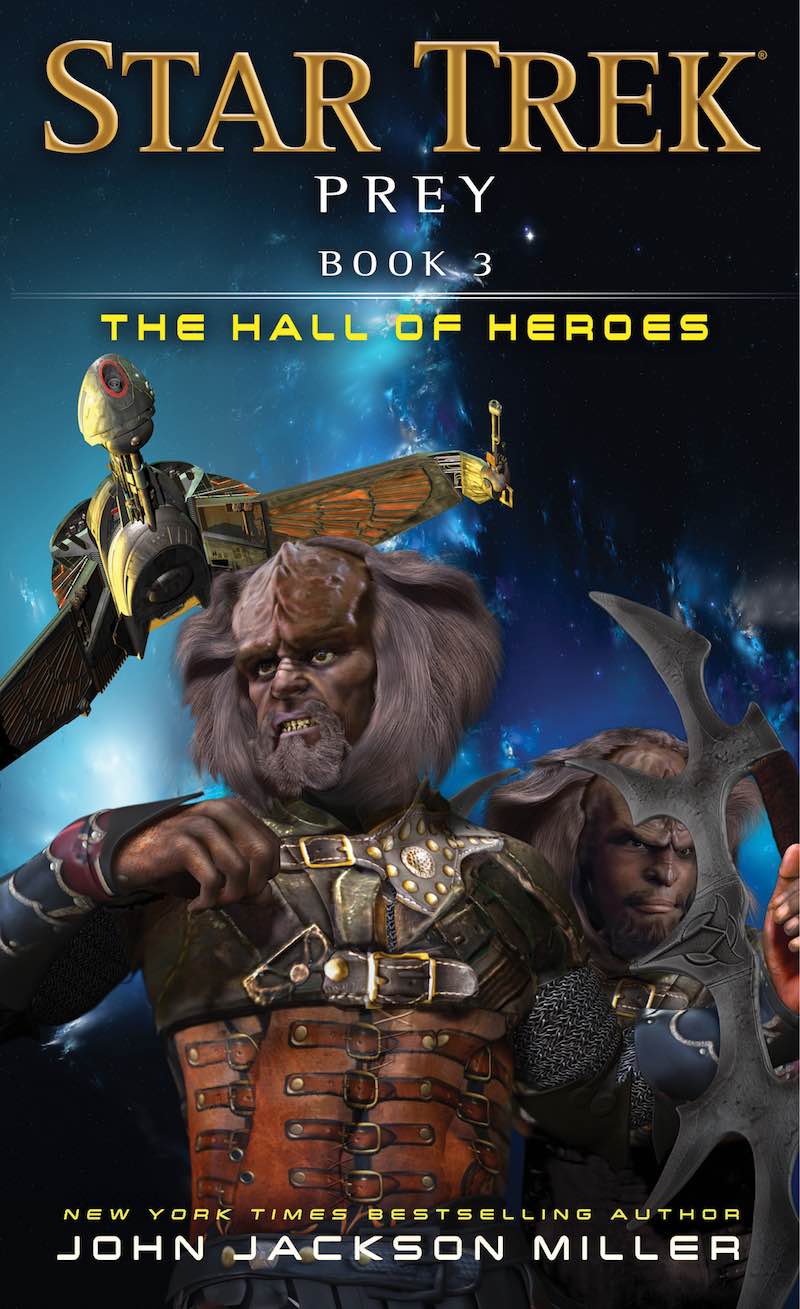 Finally, if someone enjoys the Star Trek Prey trilogy, and they’re looking for a book of yours to read next, which would you recommend and why?

Beyond the other two Star Trek works I just mentioned, I have a number of other books coming out this fall. I’m in two anthologies releasing this fall for the Halo games: Fractures: Extraordinary Tales From The Halo Canon [a short story collection you can read about here] and Halo: Tales From Slipspace [a comic book collection]. Then, in November, Dark Horse are releasing the Mass Effect Omnibus, which includes the three graphic novels I cowrote with the lead designer on the game series.

There’s also short stories and one book in my own Overdraft universe that are available. All have sort of the same sensibility that I bring to my licensed fiction. And then, of course, there’s the mass of work I’ve done for the Star Wars universe, from the canon-kickoff novel A New Dawn to the award-winning Kenobi to my Knights Of The Old Republic comics, which Marvel is making available again digitally and in new print collections. 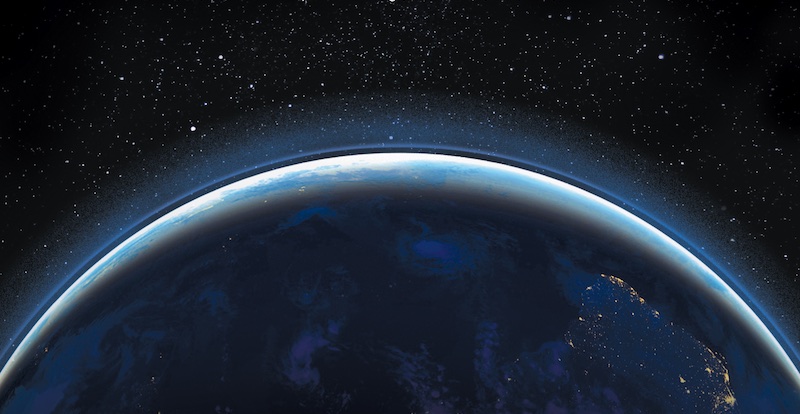 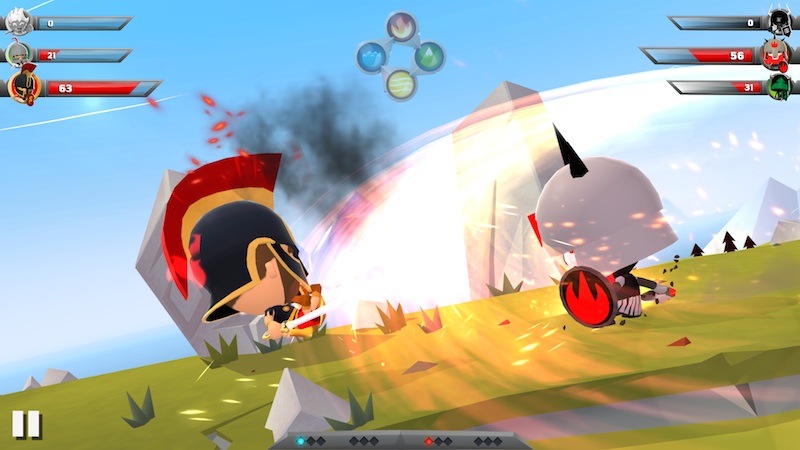 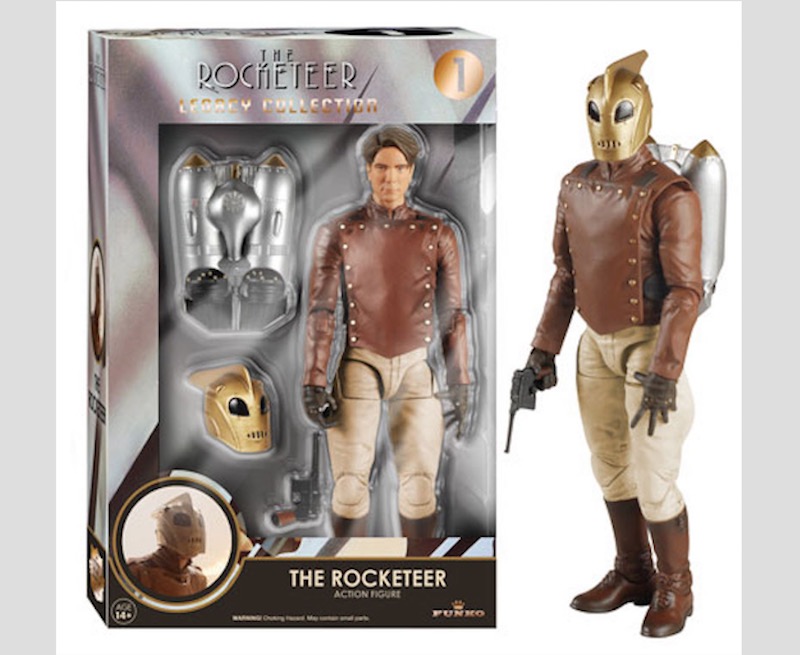