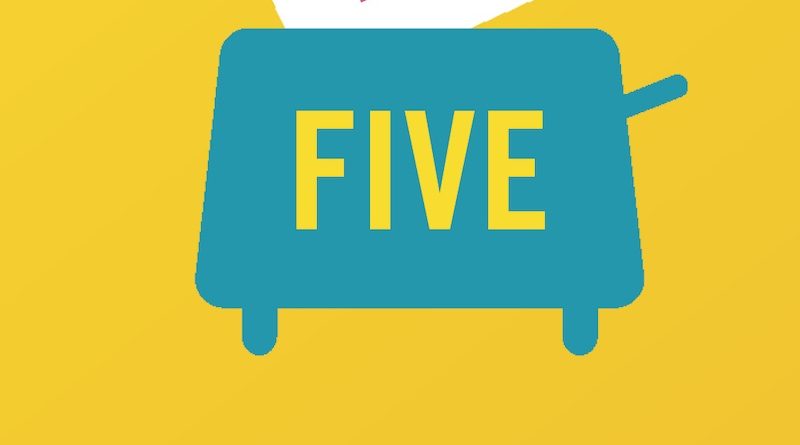 There’s no denying that movies (and TV shows, and books…) can be a big influence on how we view people who are different from us. It’s why Jared, the robot dentist in writer Simon Stephenson’s new comedic and speculative science fiction novel Set My Heart To Five (hardcover, Kindle, audiobook), decides to become a screenwriter to tell his story, to tell his people’s story. In the following email interview, Stephenson — a screenwriter himself — discusses what inspired and influenced what he calls a “misstopian” sci-fi story.

To start, what is Set My Heart To Five about, and when and where does it take place?

Set My Heart To Five takes place in 2054, when humans have locked themselves out of the Internet, Elon Musk has incinerated the moon, and we now have androids. Known as “bots,” they have regular human bodies, but CRISPR technology has made their brains programmable biological computers that are supposed to be incapable of feeling emotions. Feelings are the sole advantage we humans hold over bots, and so anytime a bot shows any hint of feeling it is immediately wiped or incinerated by the Bureau Of Robotics.

As humans, we of course make our bots do the jobs we no longer wish to do ourselves. Such as dentistry. Bots will actually make great dentists, because their lack of empathy means that they cannot be distracted by complaints or tears. A bot dentist will get that tooth removed every time.

So, Set My Heart To Five is narrated by Jared, a bot dentist who — at least at the beginning of the book — lives in Ypsilanti, Michigan. Watching old movies trigger an emotional awakening in Jared, and he decides that he must change the world for himself and all his kind. Unfortunately — and with typical fuzzy bot logic — he decides that the best way to do this is by travelling to Los Angeles and writing a movie that will convince humans that bots should be permitted to feel. And as with so many of us who move here to follow our screenwriting dreams, things do not go exactly to plan.

Where did you get the original idea for Set My Heart To Five, and how, if at all, did that idea evolve as you wrote this story?

Set My Heart To Five is one of the only things I’ve ever written where I can say with certainty when and where the idea arrived. I was staying in a motel in the Marina District in San Francisco, and when the idea of an android screenwriter popped in to my head, I immediately knew I would write it as a book. That evening, I took a long walk through Crissy Field to the Golden Gate Bridge. Both the motel and the walk ended up being part of the book.

The broader background is that I had moved to the Bay Area a couple of years previously. San Francisco is so intimately wrapped up in tech culture that living there I sometimes felt like I was already in the near future, and consequently I spent a lot of time thinking about what the next two or three decades might bring us.

The other piece of the puzzle is that my day job there was writing a film at an animation company who are renowned for the emotion in their movies, and so I equally spent a lot of time thinking about how movies generate emotion.

That would be Pixar, right?

Yes. I have been calling it the “big animation company in San Francisco” because I’m not supposed to mention it yet. I’ve been so careful about that, but I’ve just noticed it actually mentions Pixar on the cover of the book itself! So, yes — it was Pixar.

In terms of the evolution, I tend to usually have a good idea of both the beginning and the end of stories by the time I start writing, and this one was no different. The big evolutions along the way were probably getting the voice right — which took a lot of trial and error — and then the decision to write a few parts of the book in screenplay format.

Yes. I believe our technological progress has rapidly outpaced the conversations we have about it, and I think the next few decades are — for better or worse — going to be the most interesting time in human history. I am endlessly intrigued by all this and wanted to explore it, albeit in a hopefully playful and entertaining way.

Is it optimistic to imagine we might have androids by 2054? Perhaps, but then would people in 1986 have ever predicted Zoom or Facetime or wireless charging? When thinking about our inability to understand the scale and pace of change, I love to remember Alexander Graham Bell’s earnest hope that “one day there will be a telephone in every major city in the U.S.A.” And then consider this, too: Dolly the Sheep was cloned all the way back in 1997, a team in China cloned primates in 2018, and Barbara Streisand even cloned her dog a few years ago. So, clearly, the technology to clone human already exists. Do we really think that — somewhere in the world — somebody isn’t already trying it?

And then, more pragmatically: given all the above, it seems impossible — apocalyptic scenarios aside — to imagine how we might live in 2154 or 12054.

In a similar vein, is there a reason the moon was incinerated by Elon Musk, as opposed to Mark Zuckerberg or Hank Scorpio or some tech billionaire of your own making?

I knew I wanted the moon to have been incinerated, and so I began by thinking who might do such a thing and why. We live in an age where private individuals — rather than nation states — are competing to make their mark in space, and so a tech billionaire seemed the obvious culprit. I was writing the book around the time Elon Musk launched a Tesla Roadster in to space, and I remember telling people this was a terrible idea because when the aliens discovered it they would surely come and mine Earth for our Teslas.

So Elon Musk was probably just the space-obsessed tech billionaire in the wrong place at the wrong time, but he also seems to be the one with a sense of humor — so hopefully he might enjoy the joke — and it does seem like an exaggerated version of something he might do.

I think important to stress that the incineration of the moon was not malevolent but was intended as a “hilarious prank.”

Yeah, I hate when you try to prank someone and accidentally incinerate the moon. Anyway, you make Set My Heart To Five sound like it’s a humorous dystopian science fiction story. Is that how you’d describe it?

Yes, that is about right, although I have been calling it speculative rather than science fiction, in part because of things like the incineration of the moon. And dystopian is such a tricky word these days, isn’t it? I think when I hear it I assume something is going to be very dark / grim / bleak, and I wanted to write something that would concentrate on the more human elements of our future, and ultimately be a little more uplifting. That being so, I have — I think — coined the term “miss-topia” to describe this kind of all-too human future.

In terms of other genres, one of my biggest influences was actually the movies themselves. My big hope was to give readers the same kind of widescreen emotional experience — highs, lows, laughter, tears — that I get from the movies I grew up with: things like Forrest Gump, Thelma And Louise, and The Shawshank Redemption.

So in terms of the humor, is Set My Heart To Five jokey like Douglas Adams’ The Hitchhiker’s Guide To The Galaxy or is it more situational, like John Scalzi’s The Last Emperox, and why did you feel this was the best approach to this story?

The Last Emperox is currently on my bedside table waiting to be read next, so I will need to come back to you on that one. Certainly, Hitchhiker’s is always a reference, and Set My Heart To Five contains plenty of one-liners, but the concept — an android becoming a screenwriter, in a world where humans have locked themselves out of the internet — is hopefully funny, too.

In terms of the overall approach, I was ultimately writing about what it means to be human, and humor is such a fundamental part of that, that it was always going to be an integral.

I think the idea to look for a flawed by hopeful future — i.e. misstopian rather than dystopian — is influenced by my overall world view. I love Damon Runyon’s quote that “All life is six to five against,” which is to say that there are plenty of reasons to be hopeful, even if the natural order is for things to be just a little more likely to go wrong than right.

Who do you see as being the biggest influences on the humor?

One of the early reviews in the U.K. drew a comparison with Terry Pratchett, and that was of course a huge thrill. I haven’t read him in quite a long time, but I was completely obsessed with him in my formative years, and I suspect the fact somebody would see a connection all this time later might be the very definition of a big influence.

Aside from Pratchett, did any other writers have a big influence on Set My Heart To Five?

Set My Heart To Five owes a debt to Jennifer Egan and her A Visit From The Goon Squad. That book — perhaps than any other in recent years — blew me away. I heard her speak at the Book Festival in my hometown of Edinburgh, and she said (and I am paraphrasing horribly) that she had wanted to write something as polyphonic as the music she was writing about. That seemed so smart and bold, and so when I decided I wanted to write about the movies, I set myself a similar challenge: to write a book that makes it readers feel some of the same things a great movie makes me feel.

How about non-literary influences; was Set My Heart To Five influenced by any movies, TV shows, or games? You mentioned some movies already.

In many ways, the book is a love letter to the movies and the theatrical experience itself. It’s also sort of a love letter to screenwriting, although I have been in that marriage for a long time, so that part is inevitably a little more complicated than straightforward love.

As you know, some sci-fi novels are stand-alone stories, while others are part of larger sagas. What is Set My Heart To Five?

It is a self-contained narrative. While I suspect this misstopian world could have held more stories, Jared’s story is the one I wanted to tell, and I really put everything into that. 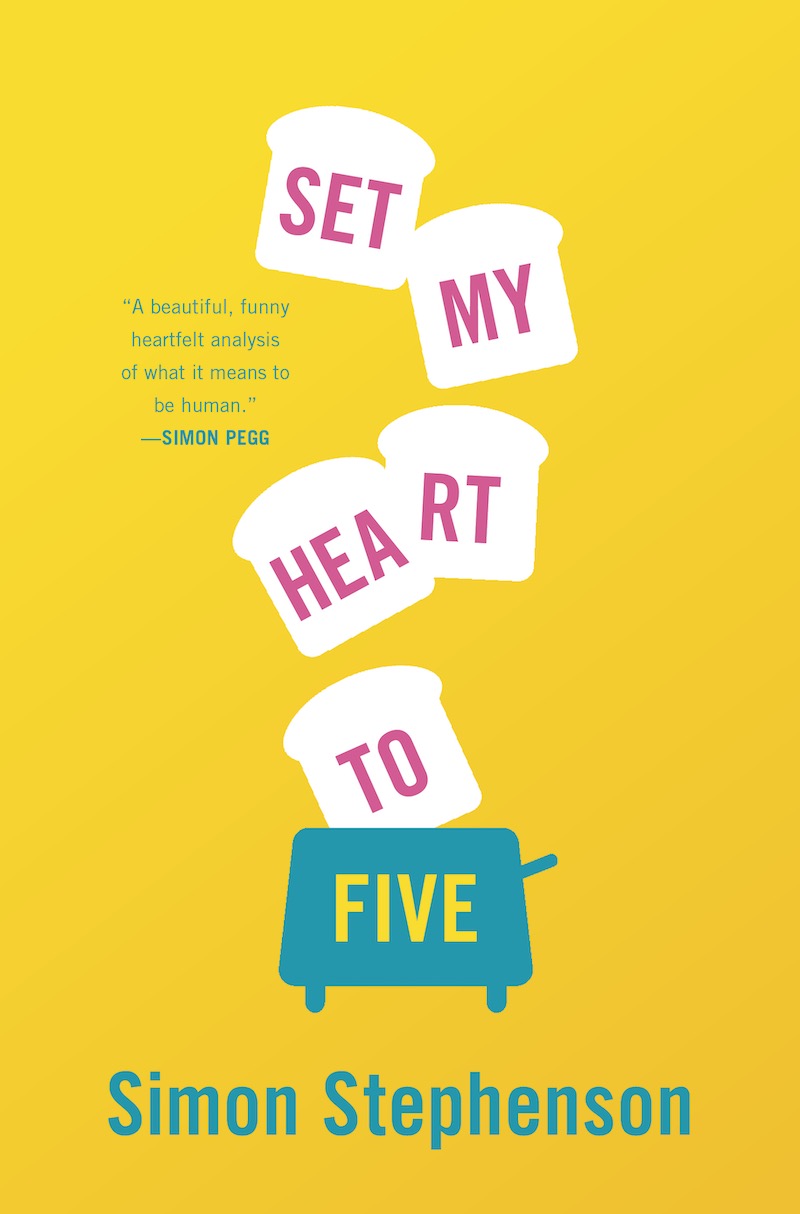 Finally, we talked a moment ago about the importance of movies on Set My Heart To Five. Has h there been any interest in adapting it into a movie?

The book has been optioned by Working Title and Complete Fiction Pictures as a film for Edgar Wright to direct. That is of course all an absolute dream come true, although I have been around the movie business for long enough that I know I am not supposed to get excited until cameras are rolling. And even then — in our pandemic age — to keep the champagne on ice. Still — a thrill! 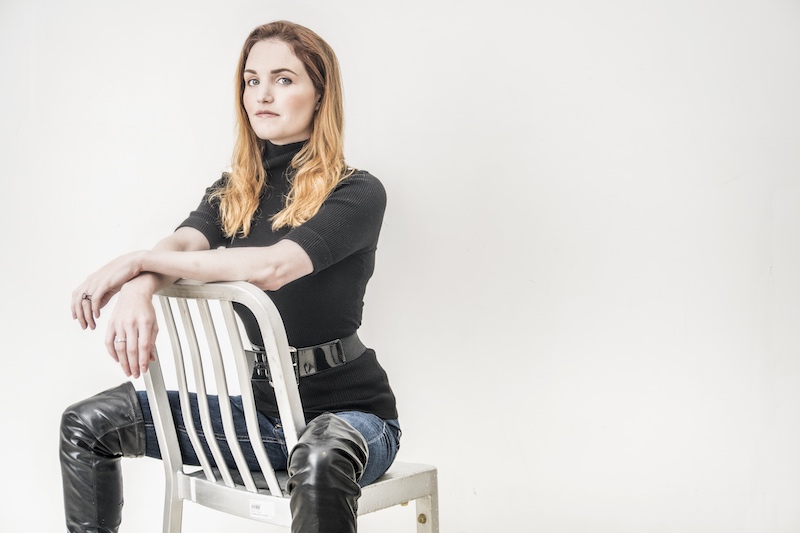 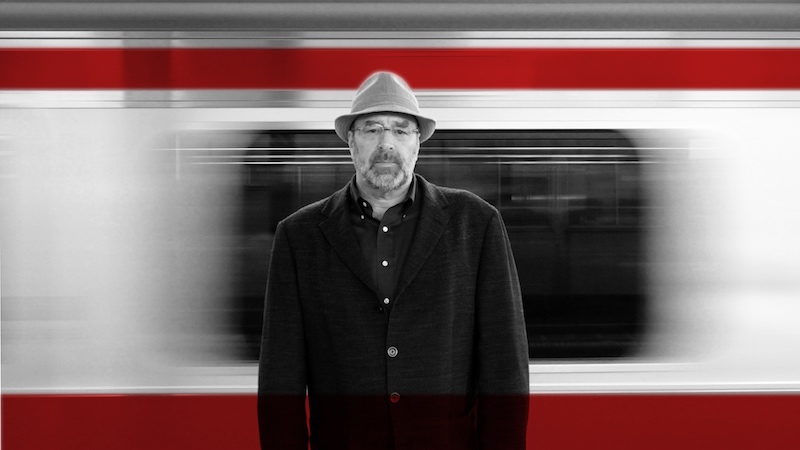 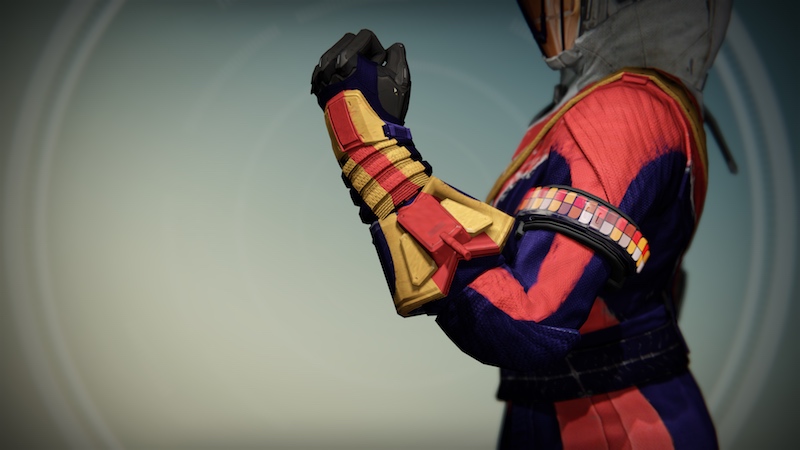