Since there seems to be a new Star Wars book every week, you’d be excused if you mistook Nik Korpon’s new novel The Rebellion’s Last Traitor (paperback, digital) for being yet another story about Luke and Leia and The Force. But in talking to him about it, it’s clear that this dystopian crime novel is less inspired by Han Solo, and more by another Harrison Ford movie. 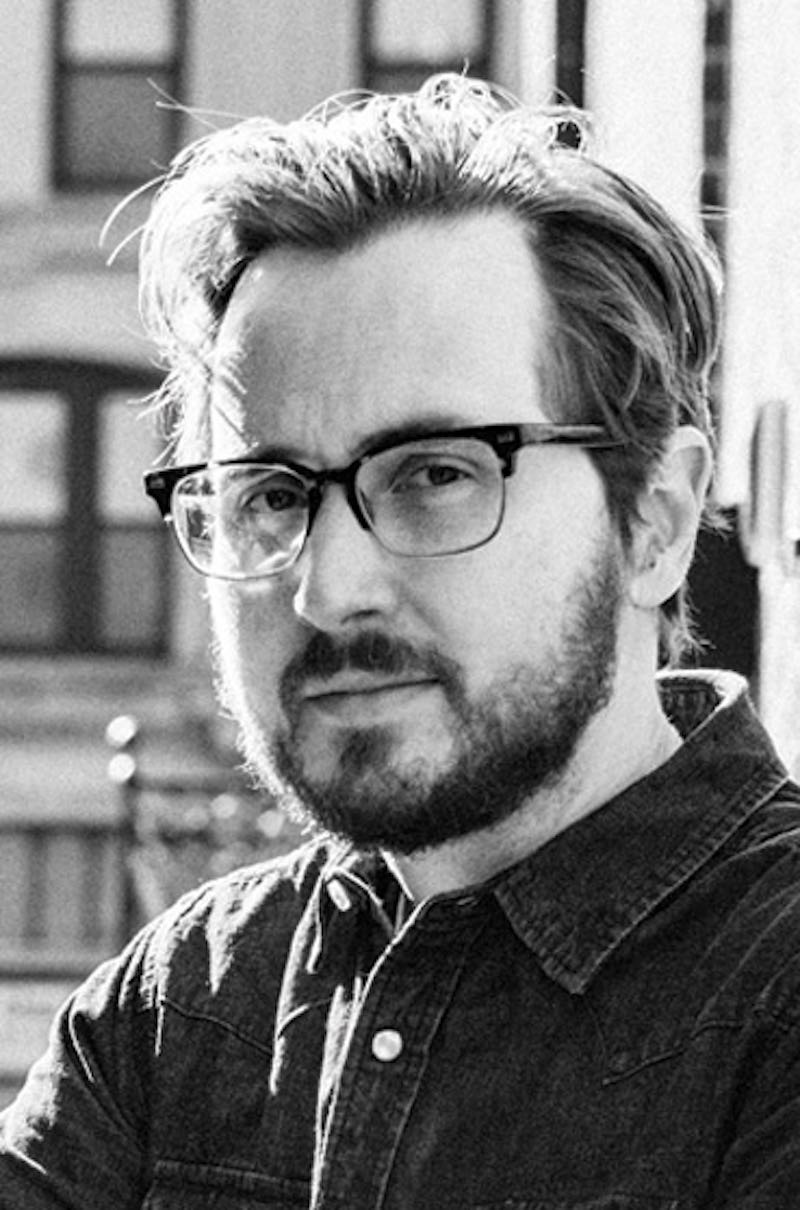 I always like to start with the basics. So, basically, what is The Rebellion’s Last Traitor about?

The Rebellion’s Last Traitor is about a former revolutionary turned memory thief called Henraek. About ten years before the book takes place, he and his best friend Walleus led the rebellion against the brutal authoritarian government party. But when it became clear that the rebellion wasn’t going to succeed, Walleus went turncoat and tried to talk Henraek into coming with him. Henraek flipped his shit and started a riot, one that killed his wife and son. So when the book starts, Henraek is stealing memories for the Tathadann and selling some on the side on the black market where they’re consumed like drugs. But on a mission one day, he finds a memory that suggests the story he’d heard about the riot isn’t quite true. The book follows him as he searches for the truth about his family. And of course, everything goes to hell.

You’d think by this point I’d have a better elevator pitch, but my best two-second one is “Murder, mayhem, Marxists, and memory thieves.”

Where did the original idea for The Rebellion’s Last Traitor originate, and how different is the finished novel from that original idea? Because the title makes it sound like a Star Wars novel.

I tend to write in clusters. I did a couple drug dealer things, and I’d just written two things about boxers. The book I wrote right before this was about a thief, so I wanted to do another thief book, but something different from the norm. I didn’t want him stealing jewelry or secrets or whatever. After wandering for a bit, I hit on the idea of him stealing memories. I’ve always been fascinated by interplay between memories and identity, how what you remember about yourself informs your self-image, and I thought it’d be cool to mess with that idea.

The finished novel is quite different from the original draft. I think my initial inspiration was “post-Katrina New Orleans, but worse.” Then it got moved to a vaguely UK setting to avoid being overly didactic. That in turn brought in a bunch of influences like the Easter Rising of 1916 and Celtic mythology, with a little wild west flair.

But yeah, I agree with you. The name makes it sound Star Wars-y. I forget the original title but at one point it was Mount Joy, as a dual nod to the notorious Irish prison and the fantastic album by Pygmy Lush, then The Boys From County Hell as a nod to The Pogues, but that felt too rural noir. I think my agent suggested the title and it felt right.

Writers usually hate talking about their influences, but I am curious if there are any writers or specific books you feel were a big influence on The Rebellion’s Last Traitor who were not as influential on your earlier novels?

This is particularly pertinent with this book because I come from a crime and mystery background, so it was a big shift writing a sci-fi novel, and I drew a lot on other books and films for inspiration.

For books, I looked at China Mieville’s stuff a lot, obviously, but two of the biggest influences were Richard K. Morgan’s Altered Carbon and Adam Christopher’s Made To Kill. They both do a really good job of combining elements of sci-fi and crime, with Morgan being more sci-fi and Christopher more crime, which was something I was pushing hard. Two others were my buddies Axel Taiari, really lush and inventive sci-fi stuff, and Gabino Iglesias, whose novel Zero Saints is a fucking revelation. All of those books drew from multiple genres in a way that felt authentic and inventive.

You mentioned film. What movies — and while we’re on the subject, TV shows or video games — do you think were a big influence on The Rebellion’s Last Traitor?

Blade Runner was a big one. The way Orphan Black deals with identity and nature/nurture is really intriguing, and that show absolutely burns through plot, which is one of my weaker points as a writer. Black Mirror is probably the most fascinating, prescient, and terrifying shows on television right now. You know, aside from the news. Ex Machina too, and the RTE crime show LOVE/HATE. These days, I watch a lot more TV than I do movies.

I have friends who keep talking about how great the storytelling is in video games, but I have to admit the last game I played is FIFA 06 on PS2. I don’t think I have the mental capacity to play the newer games. They look like VR or something.

And this is my last “influence” question. The world in The Rebellion’s Last Traitor has been described as “dystopian.” Do you agree?

I don’t think I can fight the description. Eitan is looking pretty rough when we see it, and the people there live under a crumbling autocracy, which you usually see in dystopian stories. But I also think of dystopian fiction as being pretty bleak, and I like to think The Rebellion’s Last Traitor is a hopeful book, despite all the terrible things that happen in it. Also, figuring out where the line is between genres — dystopian and sci-fi, crime and noir, mystery and thriller — can be exhausting. There’s a running joke among friends that the first person to say “What is noir?” at a crime convention foots the bar bill.

I don’t remember the exact point, but it was somewhere in the last overhaul-edit. I wrote this a while ago and showed it to my then-agent, and we did some fairly major edits, but ended up parting ways before doing anything with the book. When I queried my current agent, I’m pretty sure I said to her, “I think this has series potential,” so I would sound better, but had no idea what to do with it. But we started doing a really deep edit, making it more sci-fi than dystopian, rewriting the whole back half, moving the setting to the UK, adding all the mythology and whatnot, and through that I found ways to expand the story-world and other possibilities for the characters I wanted to explore.

As for making it a trilogy, it just felt right. I like trilogies. There’s a beginning, middle, and end, and it all feels satisfying. That said, don’t write a three-book series on a two-book deal. Unless you’re a masochistic.

Ha! So how much of the Memory Thief Trilogy do you have figured out? Like do you have the other two books plotted, do you know how it ends…?

I’ve already turned in the second book, Queen Of The Struggle, so I know how that ends. Though I haven’t gotten my edits yet, so maybe I shouldn’t be too confident. When we pitched The Rebellion’s Last Traitor, we included a ten- or twelve-page synopsis of Queen Of The Struggle and a two-pager for the last book, tentatively called Children Of The Dead, so I have the broad strokes for the third book and know the big story conflicts, but I have no idea past that. Hopefully people will dig the first two books so my publisher will pick up the third, because I’m excited to find out how it all ends.

Not unless you know something I don’t.

I think it’d probably be a better TV show than film, because there’s a lot of area to explore. Something akin to the way they’re doing Preacher right now, looking at how they’re knitting together the Saint of Killers with Jesse, Tulip, and Cassidy’s and whatnot. There are tons of little bits of mythology and local lore sprinkled throughout The Rebellion’s Last Traitor that would be interesting to see. I think you could do a film version of it, you’d just have to strip out a lot of the texture of the book.

I just realized I sound like a dick, talking about “the texture of my book…”

This wouldn’t happen, but if The Rebellion’s Last Traitor was being made into a TV show, and the producers asked you who they should cast in the lead roles, who would you suggest?

I know this is something writers are always supposed to think about, but it’s honestly never crossed my mind. Walleus is weird, because the original inspiration was Baby Jewels Moses from Seth Morgan’s brilliant novel Homeboy, who is just a massive motherfucker that smells like lavender all the time. Then, as I rewrote and rewrote and hit on the friendship angle between Henraek and Walleus, I started thinking more about the Raylan Givens/Boyd Crowder relationship in Justified. So I guess Walleus would be Walton Goggins if he ate himself two times and Henraek would be Timothy Olyphant on a bender. Or a grouchy Dominic Cooper. 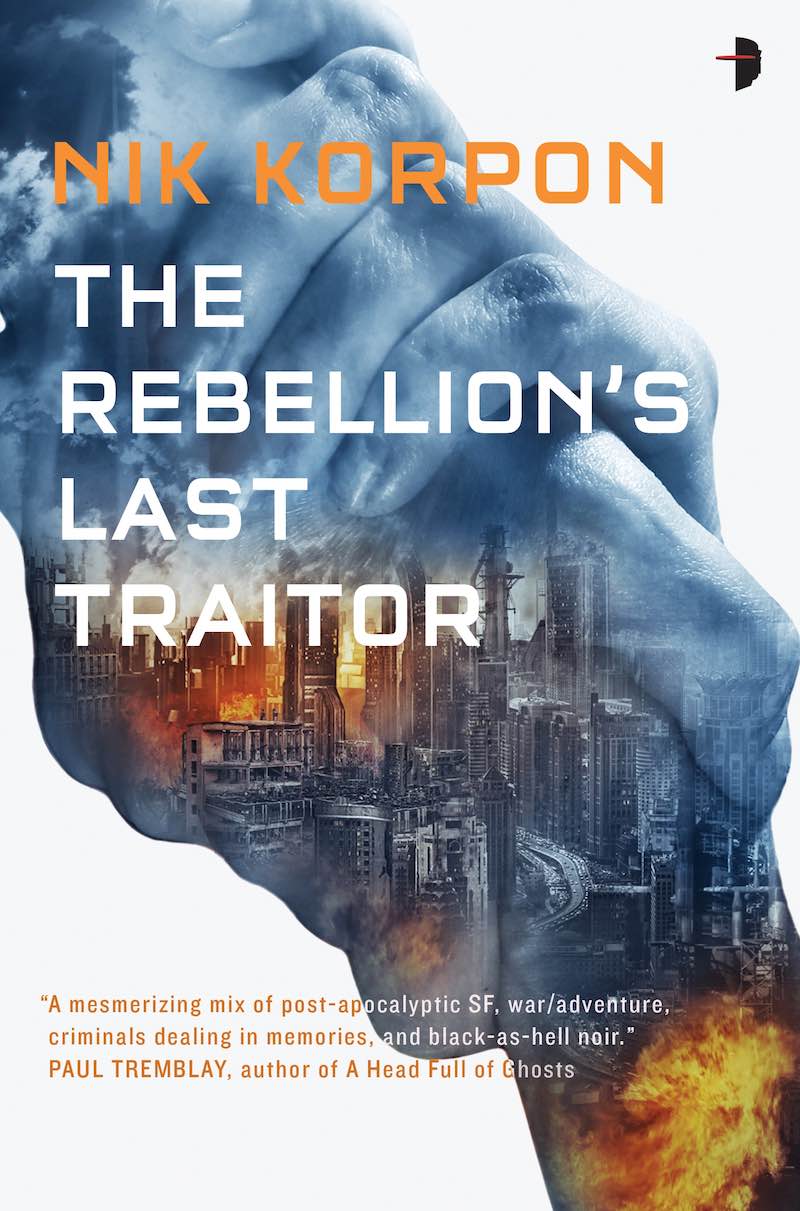 Lastly, if someone enjoys The Rebellion’s Last Traitor and they’re looking for something to read while waiting for Queen Of The Struggle to come out, which of your other books would you recommend they read and why that one?

The Soul Standard is probably the closest to this. It’s part of a novel-in-novellas I wrote with three other people, about a boxer and a torch singer who moonlights as an organ thief.

But they could also read Off Rock by Kieran Shea or She Rides Shotgun by Jordan Harper or The Woman from Prague by Rob Hart or Blacky Jaguar Against The Cool Clux Cult by Angel Luis Colón or October by China Mieville or Politics In A Time Of Crisis by Pablo Iglesias and be just fine, too. 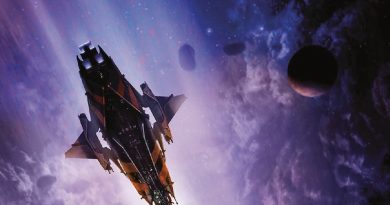 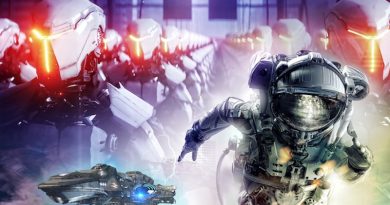 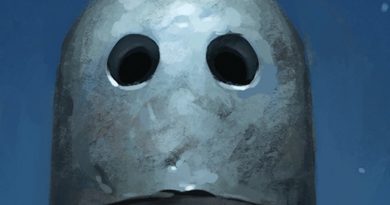