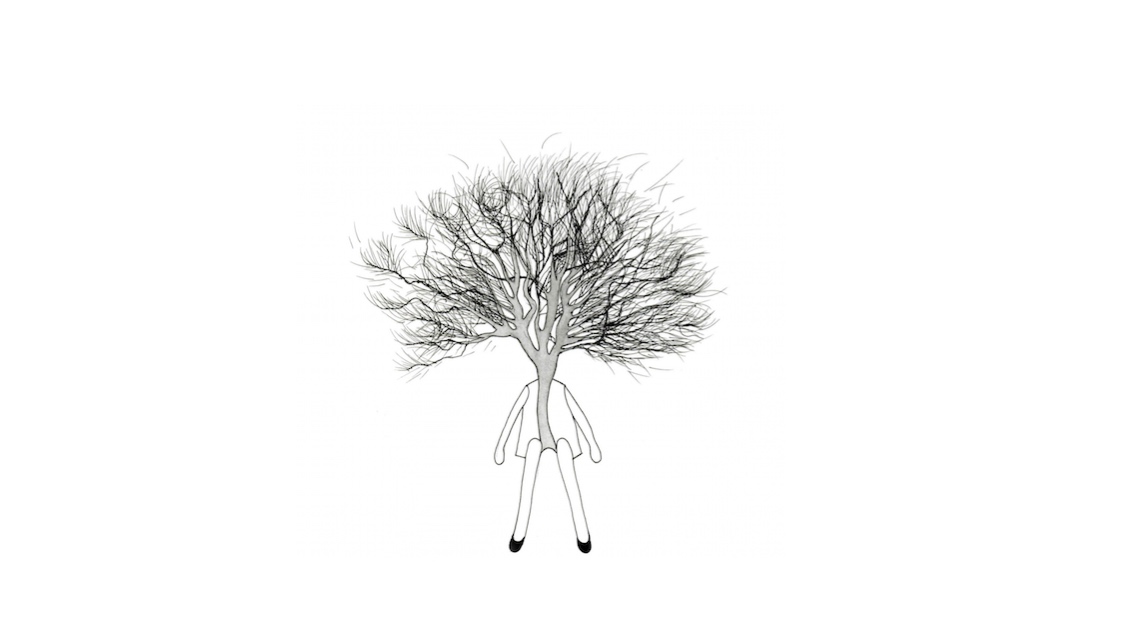 Some of the best art comes from when we explore difficult subjects. It’s something I thought about a lot when editing the following interview with Una, the writer and artist of the graphic novel memoir Becoming Unbecoming (paperback, digital), in which she explores the serial murders committed in the late-’70s by Peter Sutcliffe as a way to explore her experiences with sexualized violence. Especially since, according to UN Women, 35% of women worldwide have experienced, “either physical and/or sexual intimate partner violence or sexual violence by a non-partner at some point in their lives.” Though in talking to Una about the book, it was interesting — but not the least bit surprising — to learn that it wasn’t as much about Sutcliffe as you might expect. 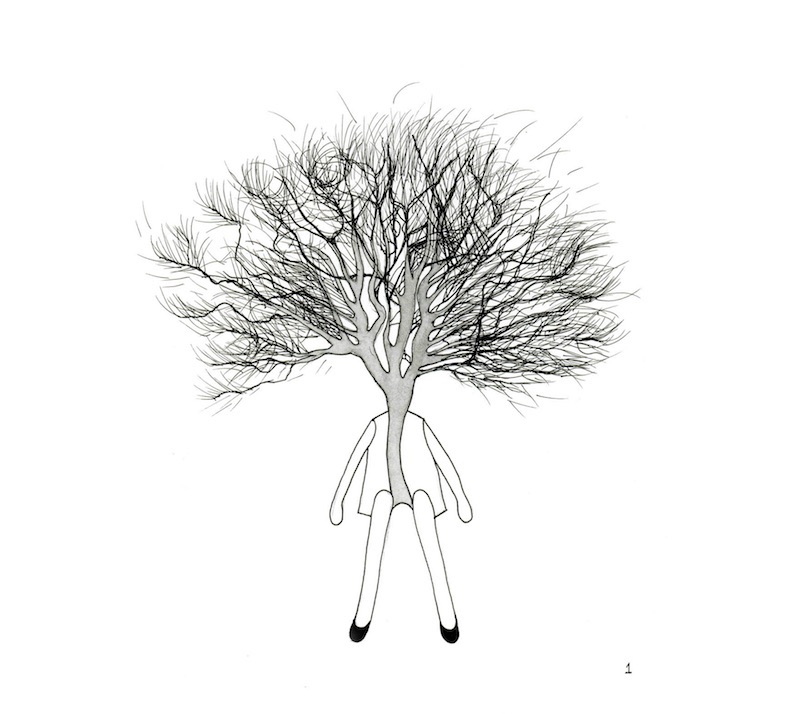 To begin, what is Becoming Unbecoming about?

It’s about growing up a girl in the county of Yorkshire in England in the ’70s. This was a time of notorious misogyny, and also a period during which a serial murderer named Peter Sutcliffe was attacking women in the area. It took the police almost six years to catch him, due to a combination of old fashioned methods, sexism, and plain old incompetence. The press nicknamed him The Yorkshire Ripper.

Where did you get the idea for this book, and how different was that original idea from the final version?

I had the idea for it when I was thinking about how to approach a graphic memoir about my own experiences of sexualized violence, and I realized that my own personal timeline coincided perfectly with the hunt for Sutcliffe. I had read a book called Misogynies by Joan Smith many years before, which has an essay in it about the West Yorkshire Police force’s attitudes toward prostitutes and their ideas about violent men at the time. Smith says that this is primarily what stood in the way of them catching The Yorkshire Ripper. In her essay, Smith said there was no use searching the shadows for a monster if you were looking for a lorry driver from Bradford. Because part of my own experience was to be slut-shamed by my community, and since the men who attacked me were also ordinary men, I wanted to explore these ideas further. So I did some research, going back to the original press reporting — I searched the local newspapers from 1975 to 1981 on microfilm in the library — and I started to put the novel together as two stories, running side by side.

When it came to how the serial killer looked or acted, did you base that on real-life killers of women or fictional depictions?

I made sure that the book revolved around the women, rather than the killer. There are enough books about violent men. I feel we need to rethink our societal fascination with serial killers. All the information about the people in the book is based on fact as much as possible. It was not easy to find out much about the women that Sutcliffe murdered, but there are around half a million web pages and nineteen books about him.

Becoming Unbecoming is set in 1977. Besides that being when Sutcliffe was killing people, why did you decide to have it take place then, as opposed to 1997 or 2017?

I wanted it to work as a period piece. I reference music, culture, and political happenings at the time. But the story translates easily to present day, indeed, in the sections of the book that tackle statistical and cultural information I refer to the present day situation regarding violence against women.

Is it also safe to assume you set it in England because that’s where you live?

Yes. But while it is a story that is located in a particular time and place, it’s also universal, as demonstrated by the number of foreign editions that are appearing.

In terms of the writing, especially the dialog, what other writers or what other books, comic or otherwise, do you see as being the biggest influences on the way you wrote Becoming Unbecoming?

It’s pretty much a unique book because I learned how to make a comic by making it. That’s why the artistic style experiments so often with the conventions of comics. However, I did read a lot of graphic novels before I started, so I suppose you could say my biggest influences were Alison Bechdel, Marjane Satrapi, Art Speigelman, and Jo Sacco.

What about the art, who do you see as the biggest inspirations for that aspect of the book?

I liked the way Persepolis by Marjane Satrapi is so monochrome, so that’s where I started. But I was working out different ways of making the art while I drew the book. I still am. I just turn up and start drawing and stuff emerges. The writing happens at the same time, so it’s quite an organic process. 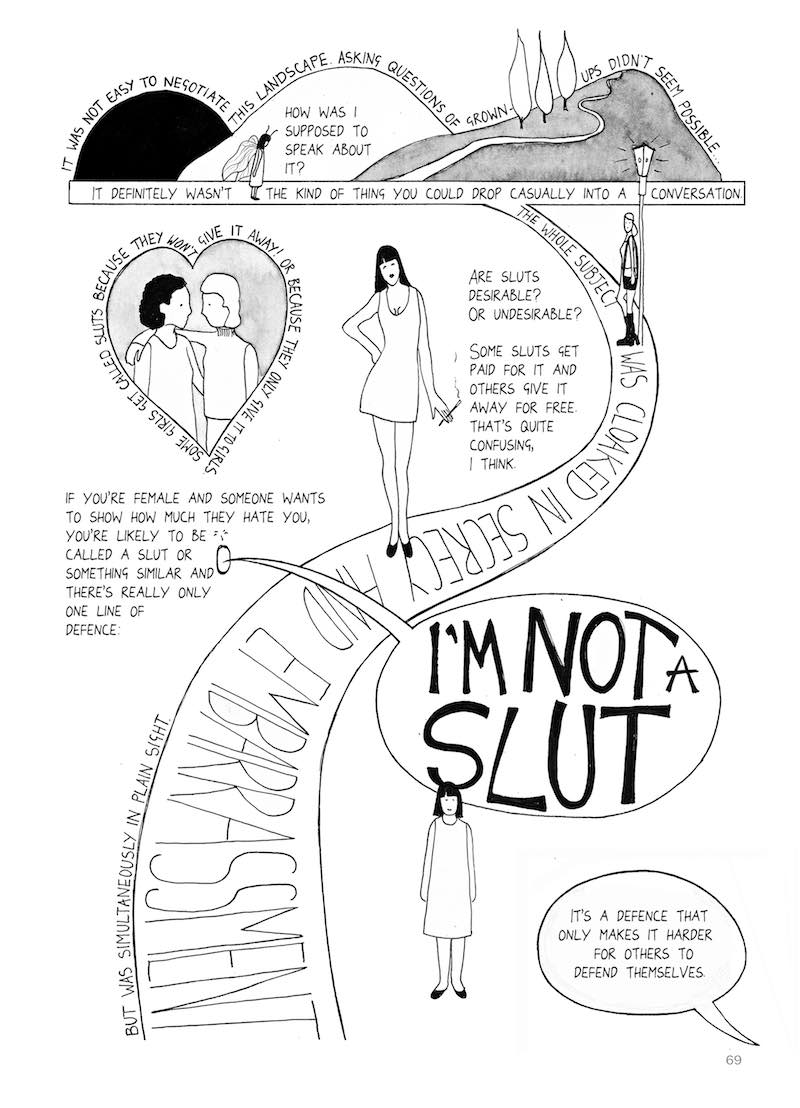 Well, I’d say you’d get a lot out of it, because I have had contacts from straight, white, middle-aged men, mostly fathers, who have told me how much the book meant to them, and how they feel more equipped to talk to their daughters about these problems, and also their sons, and how they have thought about their own childhoods, and their own friends, and how they look a little differently at some of those friends now. Of course, I get many more contacts from women and girls, but the book is written for a broad audience.

Becoming Unbecoming is just now coming out in the U.S., but it’s been out in other countries, including England and Brazil. Have you noticed a difference in the way people react to it based on where they’re from?

Yes, maybe a little. I had some Brazilian women contact me to say how grateful they were to have the book, because there is a big problem with misogyny there and not much published for a general audience about it, so that was nice. My book has also been well received in Spain as well as the UK and the Netherlands.

Becoming Unbecoming is not the first graphic novel you’ve published. You previous wrote and illustrated On Sanity: One Day In Two Lives. Are there any plans to publish that in the U.S. as well, or do I need to buy it off your website, unacomics.com?

Ah yes, On Sanity is kind of older and newer than Becoming Unbecoming because I started it before and finished it after. You can buy it from my website, I will post anywhere in the world, but it would be great if a U.S. publisher would pick it up.

Given how so many movies are based on comic books and graphic novels these days, has there been any talk of making Becoming Unbecoming into a movie?

I’d prefer an animation film, but no one has come forward for that yet. I’d prefer any film produced based on the book to look like the book, so I’d like to do some of the drawing for it. Additionally, I think live-action scenes of sexual violence are difficult to pull off well for a number of reasons that might be too complicated to go into here.

Right. If asked, who would you like to see star in the Becoming Unbecoming movie, or voice the characters if it was animated?

Wow, what a question. This would be someone to play me and my life, so that would be really weird. I have no idea, but I always wanted to be taller, so I’d like someone tall please. 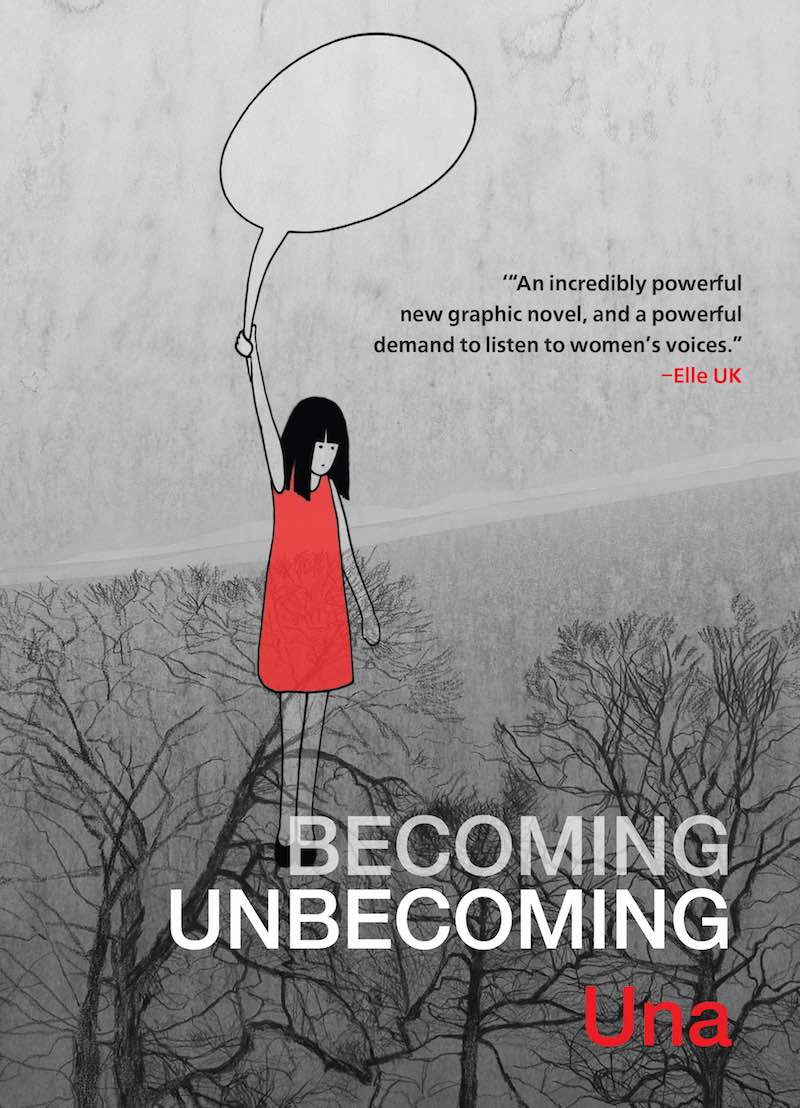 Lastly, if someone enjoys Becoming Unbecoming, and they’re looking for another graphic novel to read while waiting for On Sanity to arrive, what would you recommend they read next and why?

Maus by Art Speigelman: This is a good starting point for those who still think comics are for fun and for kids. It’s a Pulitzer Prize winning novel based on oral history recorded from the author’s father, who survived Auschwitz.

Fun Home by Alison Bechdel: Bechdel is such a clever cartoonist that she even has a test for sexist films named after her. This was her first novel length work, and it is an interesting, nuanced, thoughtful tale of growing up, coming out and loss.

Persepolis by Marjane Satrapi: Great human/political/coming of age story and flowing, monochrome graphics. I loved this book, and the animated film is also worth a look.

Jimmy Corrigan: The Smartest Kid On Earth by Chris Ware: This is such an absorbing work. The story is human and beautifully executed by the drawing, the pages, the design, the small shifts between panels are typical of Ware’s excellent comics creation. A magnificent work.

A Childs Life And Other Stories by Phoebe Gloekner: Not an easy read. But if you got through mine, you’ll probably be ok with this. Amazing drawing. Troubling story. Frank and funny.

The Great War (Battle Of The Somme) by Joe Sacco: This is a beautifully drawn concertina book that unfolds from a box.

The Black Project by Gareth Brookes: This is a great example of an original approach to an old problem: adolescence and getting a girlfriend. Images are embroidered.

Hole In The Heart: Bringing Up Beth by Henny Beaumont: Lovely, soft, atmospheric drawings and a touching and honest story about bringing up a child who has Downs Syndrome.

Supercrash: How To Hijack The Global Economy and The Age Of Selfishness: Ayn Rand, Morality, And The Financial Crisis by Daryll Cunningham: A graphic history and analysis of new-liberalism and late capitalism, with diagrams for the mathematically challenged. Everyone should read it. 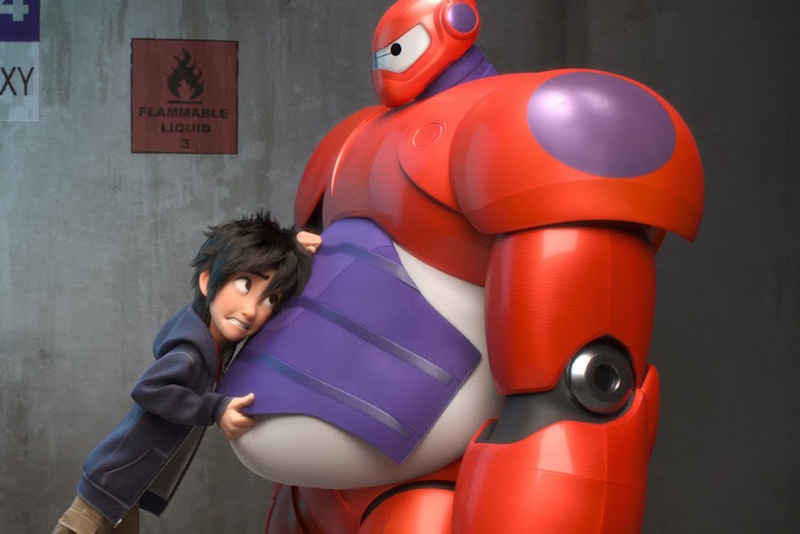 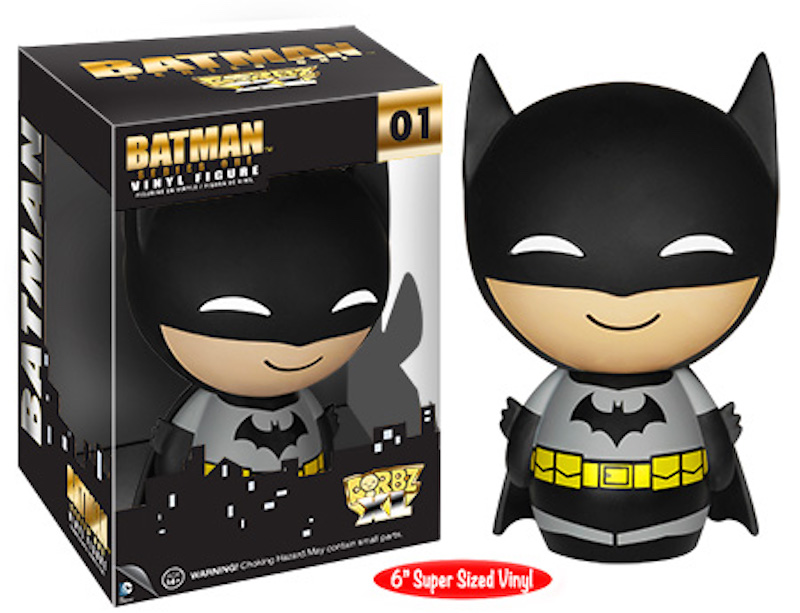 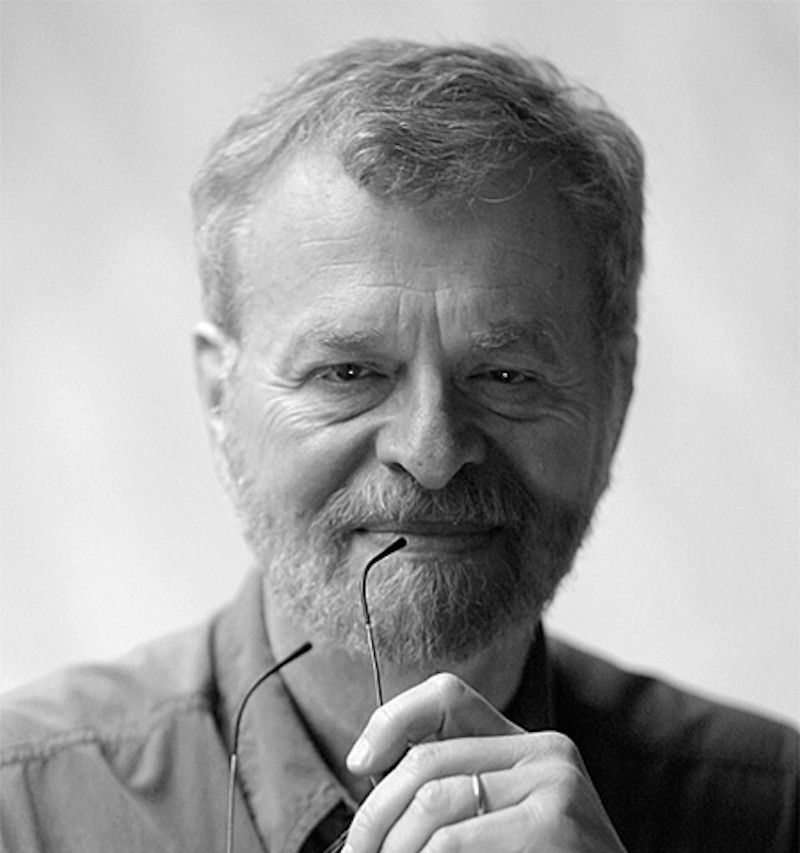