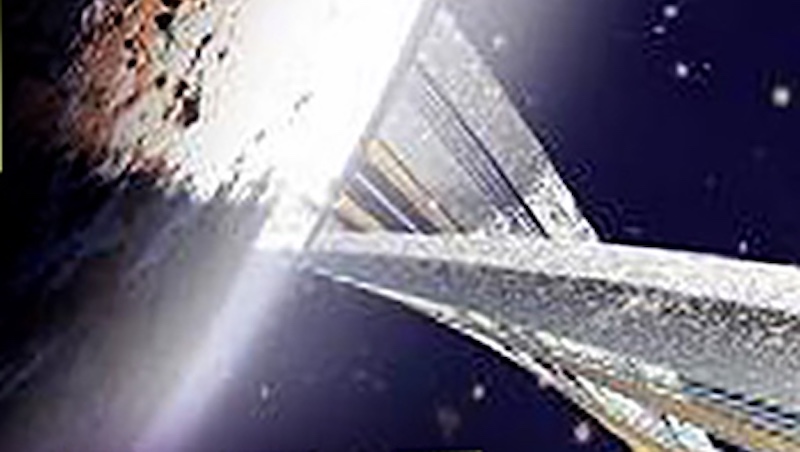 As a writer, Drew Williams is, “always happy to wear the label of space opera with pride.” But in the following email interview about his latest novel, A Chain Across The Dawn (hardcover, Kindle), he notes that there’s another genre at work in this science fiction story as well. 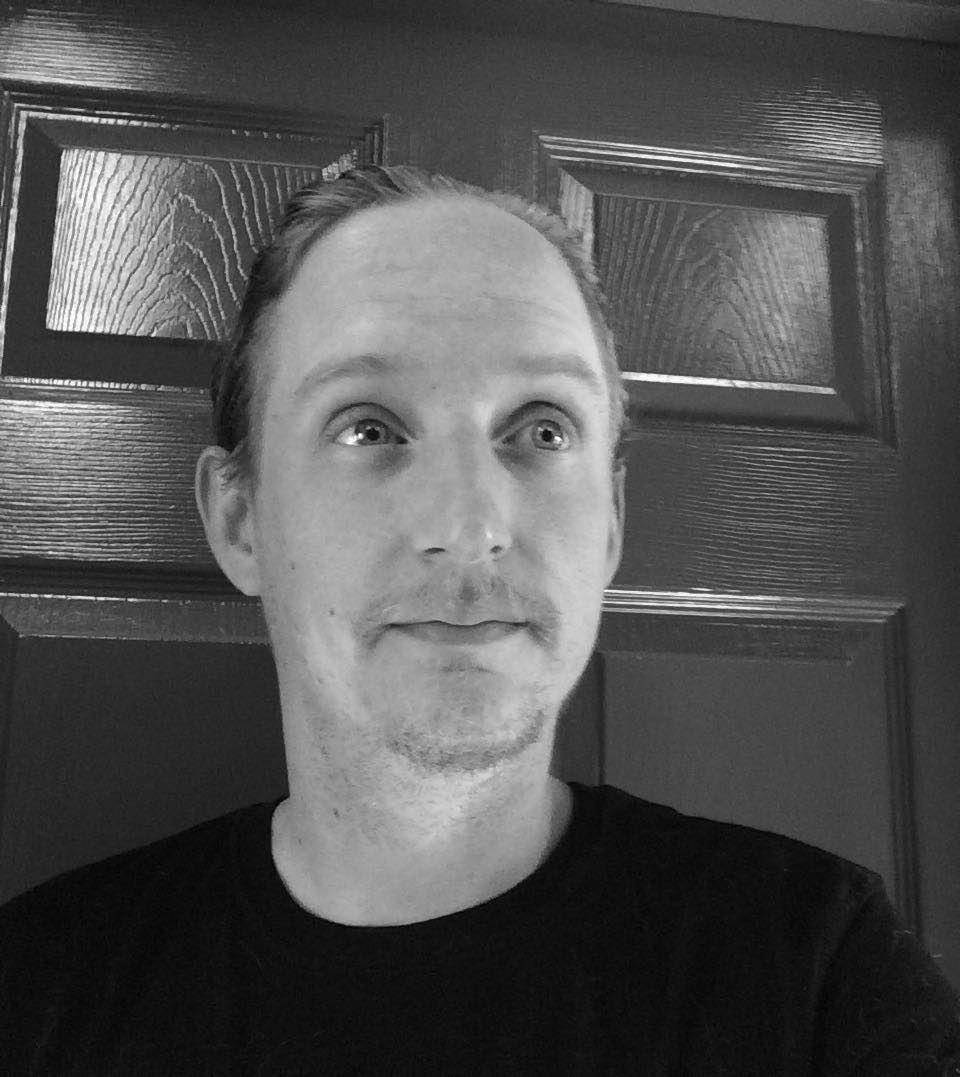 Let’s begin with a quick overview. What is A Chain Across The Dawn about, and how does it connect, both narratively and chronologically, to the previous book in The Universe After series, The Stars Now Unclaimed?

A Chain Across The Dawn is a space opera adventure that continues the story of Jane and Esa, two operatives of a sect called The Justified that comb a galaxy wracked by a technological apocalypse in search of children — like Esa — with psychic gifts, in order to try and train those children to prevent the apocalypse’s return. A Chain Across The Dawn specifically finds Esa and Jane coming face-to-face with a long-forgotten threat, ready to strike at a universe left entirely unprepared for its awakening.

When in relation to writing The Stars Now Unclaimed did you you come up with the idea for A Chain Across The Dawn and how did that story evolve as you wrote it?

When I wrote The Stars Now Unclaimed, I knew it had the potential to be a series, but I also wanted it to stand on its own, so I wasn’t specifically considering sequels. Once Stars was done, though, I had the luxury of being able to sort of look forward, and ask myself what the series — The Universe After — would mean as a whole, and the answer that came to me was that it was really the story of Esa, who was a secondary character in Stars, rather than Jane. Swapping perspectives to the younger character meant I had a whole new viewpoint on the universe to consider, which was a fantastic way for me to sort of “see” how this galaxy worked through new eyes. So for me, the creative process of A Chain Across The Dawn was really about discovering — as the story unfolded on the page — who Esa was becoming over the course of the novel, as opposed to Stars, which was more about revealing who Jane already was.

A Chain Across The Dawn is clearly a sci-fi story. But are there any subgenres of sci-fi, or combinations of them, at work in this novel as well? Or other genres for that matter.

I’m always happy to wear the label of space opera with pride; I love the notion that these are big, operatic stories, full of both big emotion and adventure, as well as more subtle notes of grace and loss. The concept of the series as a whole definitely owes a debt to the post-apocalyptic subgenre, though somewhat removed from the usual Mad Max-style rusted metal and endless deserts associations most people have with that particular breed of story, and A Chain Across The Dawn is also a little heavier on horror than Stars was, though at least a little bit of horror usually works its way into anything I write.

Are there any writers or specific stories that had a big influence on A Chain Across The Dawn but not on The Stars Now Unclaimed?

Based purely on that sort of ramping-up of the horror elements, Stephen King is definitely a big name-check for A Chain Across The Dawn; there’s a little bit of Thomas Harris in there as well. The other author I would claim as a heavy influence — just because, again, I was swapping to a younger protagonist — would be J.K. Rowling, who I think is no-contest one of the best out there in terms of not just writing “real” adolescent characters, but in showing them grow and change as they mature, especially under pressure.

How about such non-literary influences as movies, TV shows, and video games; did any of them have a big influence on A Chain Across The Dawn?

If you’re writing space opera, you’re either acknowledging the debt you owe to Star Wars, or you’re running so far away from it that you’re pretty much acknowledging it anyway; I’m very much in the former camp. Similarly, Joss Whedon’s Firefly is a definite touchstone — not just for me (though absolutely for me!) but for anyone, I feel like, writing sort of “on the fringes” space opera, stories about characters not necessarily operating from a position of strength or comfort, but instead sort of constantly running ragged just to keep themselves afloat. For A Chain Across The Dawn itself, rather than The Universe After as a whole, I’d also count James Cameron’s Terminator — the first film, very specifically — as a major influence. 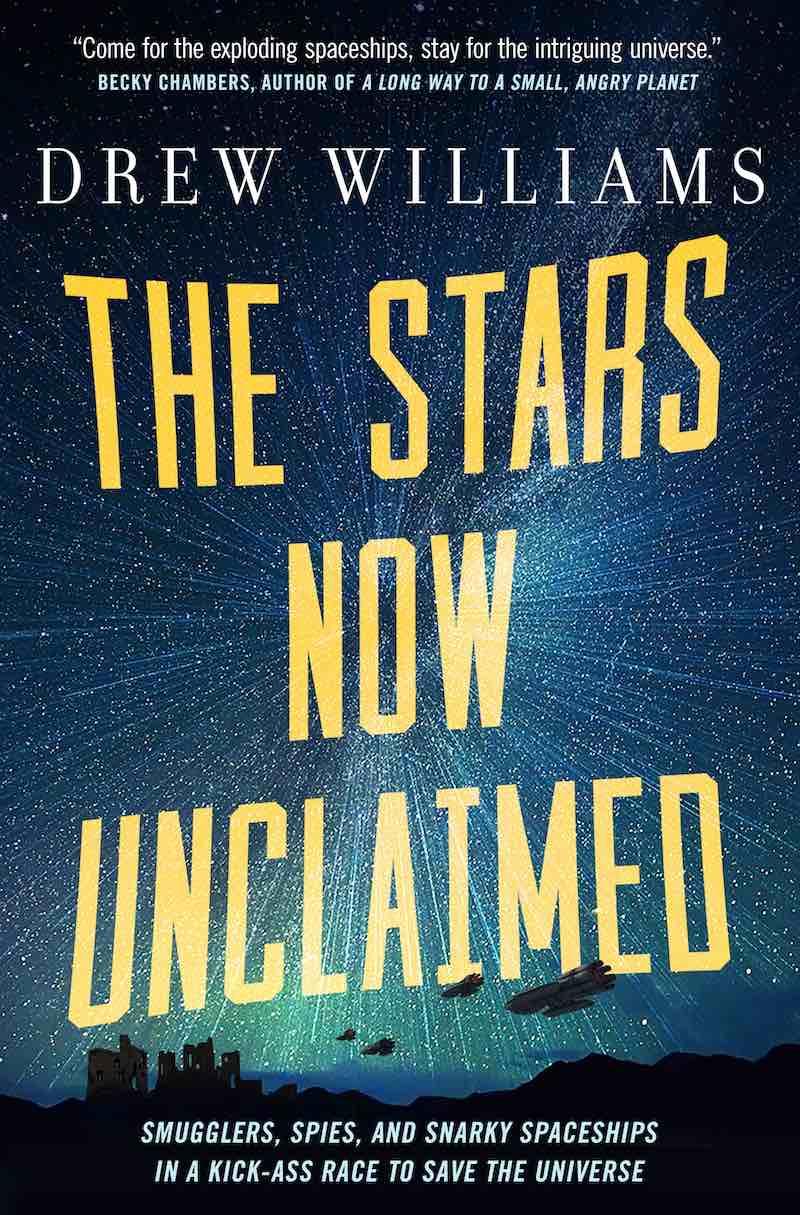 Now, as we’ve been discussing, A Chain Across The Dawn is the second book in The Universe After series. You kind of touched upon this already, but is this series a set number of books like a trilogy, an ongoing thing…what?

It’s absolutely a set number of books, probably around four; I have a definite end-point in mind, one that A Chain Across The Dawn is very much putting in motion. There are great authors out there who can write sort of indefinitely open-ended series, and I’m very envious of them: I tend to put my characters through the emotional wringer, so I feel like without an end goal to aim them at, if I went much further than four or five books, they’d just be too tired to keep going!

Book three, The Firmament Of Flame, will be out next February. If A Chain Across The Dawn is the book that sets in motion the larger, series-wide arc, Firmament is very much the beginning of the end.

As you know, some people will wait until all of the books in The Universe After series are out before reading any of them, and some will then binge read the whole thing. But is there any reason — and I mean a story-based one, not a PR or publishing one — why you think this is a bad idea? Or a good idea?

It’s an interesting question. Though, yes, purely from my point of view, I have to say that just in general, it’s not a great idea to wait to pick up a series until it’s finished. Interest in earlier books is what drives publishers to sign authors for sequels, so waiting is a great way to make sure your favorite authors don’t ever get a chance to finish the series you’re interested in.

That aside, though, I have to say I do think spacing them out — reading the books with some time in between — is probably the better approach for The Universe After, if only because there are similar time-gaps in between the individual novels, so giving the characters space to grow and change in between readings feels like it would fit with the time that passes between stories.

Plus, you can also do what I usually do with series: read them as they come out, then go back and re-read the prior book just before the next arrives.

Earlier I asked if A Chain Across The Dawn had been influenced by any movies, TV shows, or video games. But has there been any interest in adapting it and the rest of The Universe After series into a movie, show, or game?

Not as yet, probably because it would be ridiculously expensive — doing space opera right ain’t cheap!

In terms of sheer, pie-in-the-sky daydreaming, think I’d probably prefer a series of films for The Universe After as a whole, just because they’re all pretty fast-paced, and it can be hard to maintain a level of tension and forward momentum like that over the course of ten-to-thirteen episodes of television. Casting a theoretical film is a little difficult though, just because both my lead characters are female POC, and the pool of “famous” Hollywood actresses who would fit is, unfortunately, incredibly limited.

And if someone wanted to make it into a video game…?

I don’t know that I’d want the narrative of the series itself adapted into a game, but I think the setting could make for a fabulous backdrop — something in the mold of BioWare’s Mass Effect series, or perhaps a kind of turn-based-strategy thing, something along the lines of X-Com: choose which planet to visit, which equipment suits the level of technological decay in the atmosphere, which sects on the ground to ally with, that sort of thing.

Now I really want to play that! 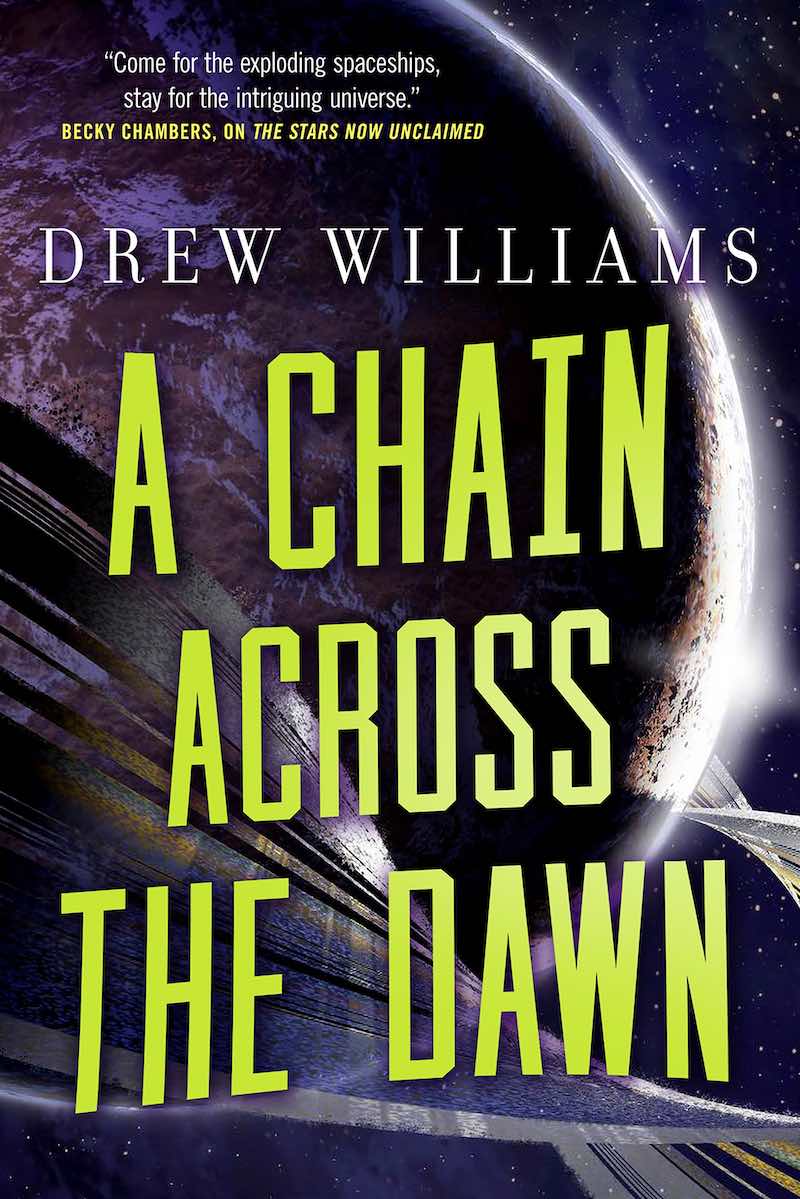 Finally, if someone enjoys A Chain Across The Dawn, what similar sci-fi novel of someone else’s would you suggest they read next and why that one?

Oh, god, there are so many! Purely because I’m in the middle of the series right now — and because the author’s just awesome in general — I have to give a tip of the hat to K.B. Wager’s The Indranan War series [Behind The Throne, After The Crown, and Beyond The Empire]; Wagers paces like a freight-train, just like I do, and shares the same focus on character relationships and high tension as well — I spend most of my time with The Indranan War going, “that’s awesome; why couldn’t I have come up with that?!” 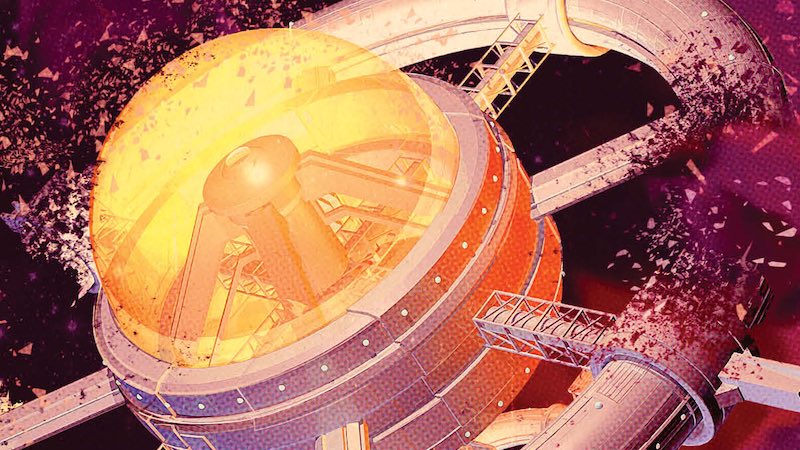 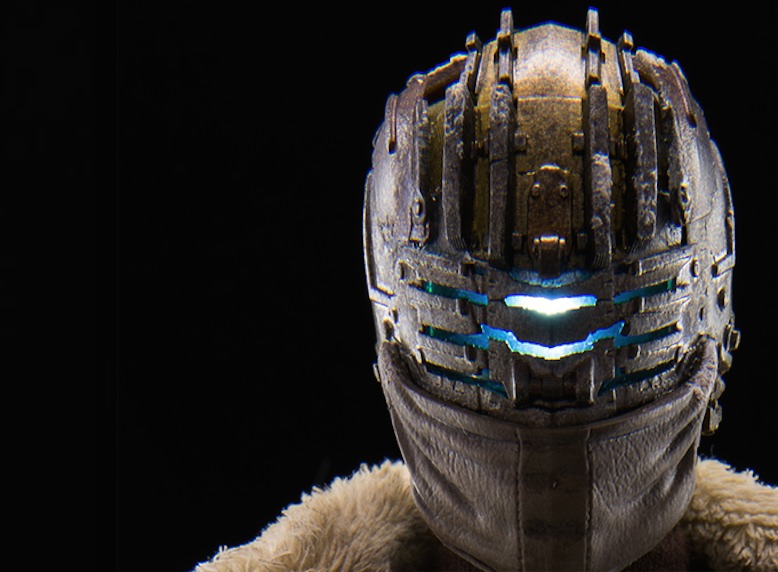 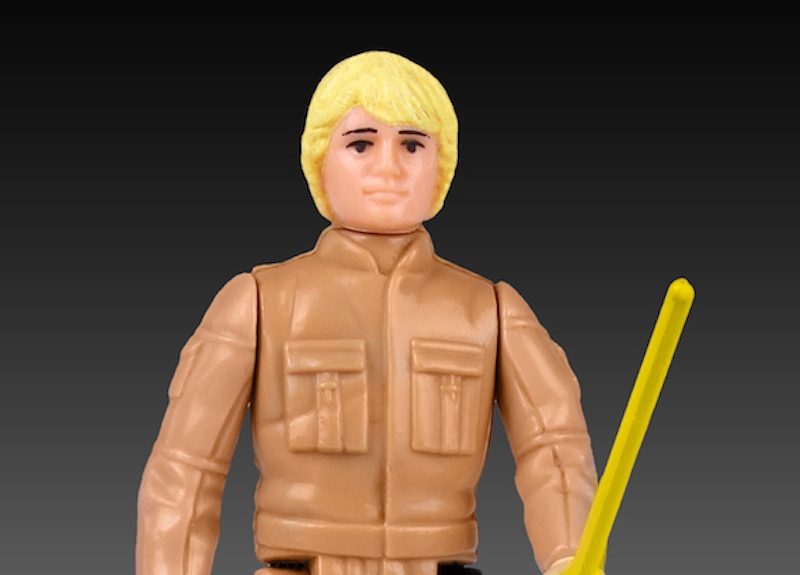 One thought on “Exclusive Interview: A Chain Across The Dawn Author Drew Williams”