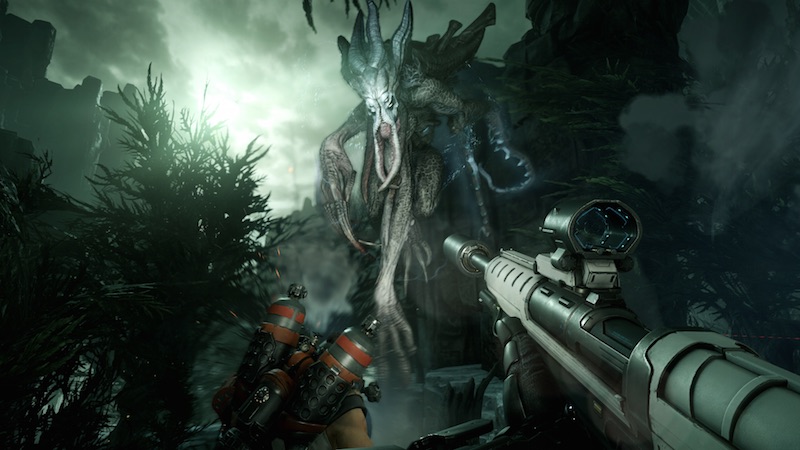 In the sci-fi shooter Evolve (PlayStation 4, Xbox One, PC), four Hunters have to track and kill a Monster controlled by a fifth player. But while, as creative director Phil Robb put it, “Evolve is indeed a multiplayer experience at its core,” he also noted, “but it’s great fun solo as well.” 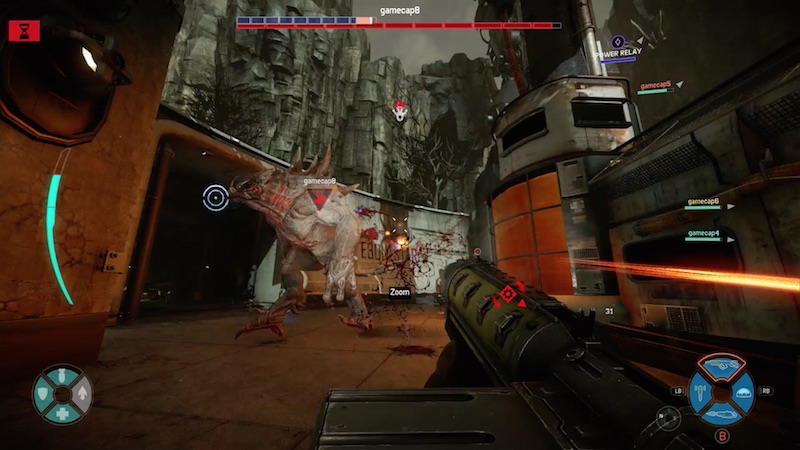 But is it really? As sci-fi shooter fan who doesn’t play well with others, I decided to put Robb’s assertion to the test by playing Evolve’s Solo mode to see if it works as just as a single-player game.

Made by Turtle Rock Studios, who previously created the like-minded but cheekier Left 4 Dead and Left 4 Dead 2, Evolve is a first-person sci-fi shooter in which mankind’s attempts to colonize the planet Shear has been stymied by the indigenous population. Specifically, large creatures called Monsters who can actually grow more powerful by eating a bunch of small animals.

Or, to put it a different way, Evolve is a third-person hack & slash action game in which you play as a nice old Monster who never hurt nobody until these four tiny jerks with guns showed up and tried to take his land. So he has to use his ability to smash, jump, and other skills to stop these interlopers.

It’s all about perspective, people.

Whether you play it alone or with other people, there’s a bit more depth to Evolve than you might expect. For starters, the world is teeming with life, life that will attack you if you’re a Hunter. You also have a variety of attacks and skills at your disposal, such as being able to breathe fire or throw rocks when you’re a Monster, or use aerial strikes or mines when you’re a Hunter. The creature can even use stealth to sneak around, while his pursuers can follow him by noticing when some birds have been startled. It also has a robust leveling up system, with all the perks and unlocks you’d expect, and even gives a nod to RPGs by giving you special attacks that have to recharge. 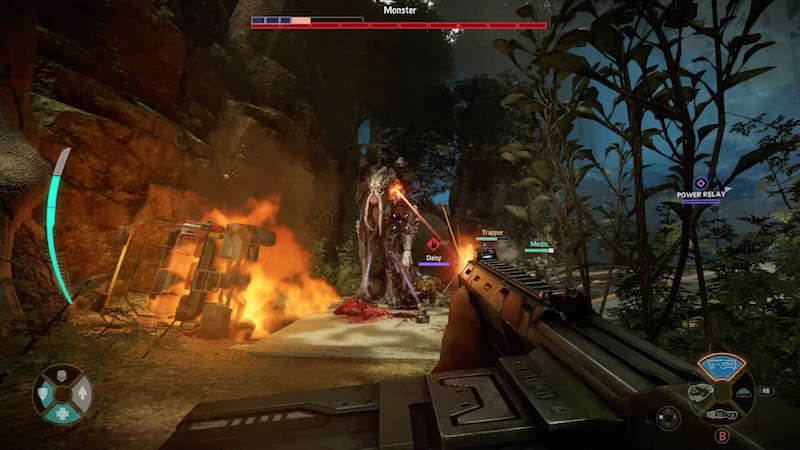 Evolve also has a lot of the elements you’d hope to find in a sci-fi shooter or hack & slash actioneer. For starters, this has the tight and intuitive controls you’d want from such a fast-moving game. It also has some real visual panache, especially in the designs of the creatures, though I do wish they’d done more with the sound design to really take advantage of my stereo’s surround sound capabilities.

For people playing alone, Evolve has two Solo mode options: “Quick Play,” which lets you play whatever mode on whatever map as either Hunter or Monster — though this just like a training mode for multiplayer — and “Evacuation,” a story-driven mode in which you play five rounds of different modes on different maps as your choice of Hunter or as the Monster, with A.I. controlling whomever you’re not. For instance, you’ll start off with a round of “Hunt,” a four-on-one fight to the death, but you’re then given a choice between “Rescue,” which tasks Hunters with rescuing colonists and Monster with killing your team, and “Nest,” in which Hunters have make scrambled eggs and Monsters have to stop you, your cholesterol is bad enough. “Evacuation” even has cutscenes, which set up the action nicely.

Of course, once you get on the ground, “Evacuation” ends up feeling like you’re just playing multiplayer, albeit with people who aren’t that talkative. There’s no story-driven plot points that prompt big, dramatic events, while every rounds ends with a score card like you’d find in most competitive modes.

On top of which, when playing as a Hunter, you never really go it alone in Evolve since you still have to work with your teammates if you have any hope of surviving, let alone triumphing. Thankfully, the A.I. is pretty solid, and will both work in tandem, and towards the common goal, even if you go rogue.

In addition, while most single-player games make you redo a mission over and over until you get it right, Evolve instead continues moving forward (though it does break its own fiction by letting you play as a Hunter who died in the previous round). 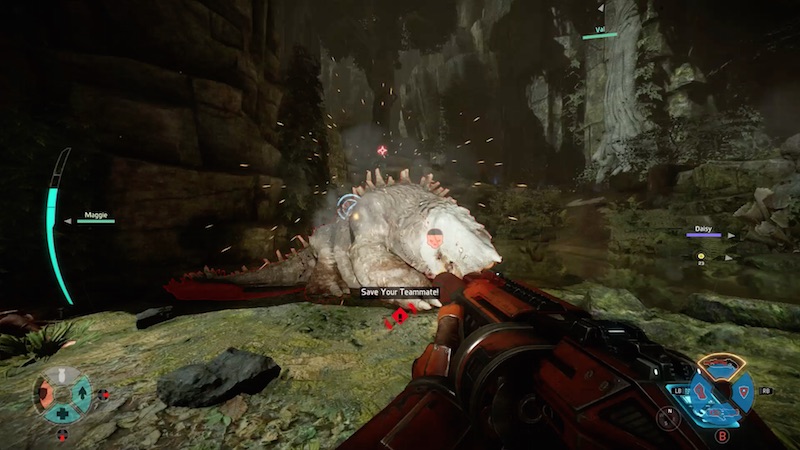 As much as “Evacuation” may be built out of multiplayer modes, there are things about it that you won’t find if you play Evolve with other people. For starters, you can actually pause your game when playing solo. Which may not seem like a big deal…until nature calls. Though if you stop playing in the middle of a game of “Evacuation,” you can’t come back later and continue it.

Similarly, if you’re playing “Evacuation” as a Hunter, and die before your teammates do, Evolve doesn’t make you watch as your A.I. compatriots on without you like in a multiplayer match (well, unless you want to). Instead, you can take control of one of the other Hunters. You can even, before you get killed, switch between the four Hunters at any time in a match. Though, like you, your A.I.-controlled compatriots can die during a mission as well.

With every game of “Evacuation” lasting just five rounds, you can crank through a solo story in an hour or so. But while this may not seem like much, and it isn’t, the solo mode of Evolve actually has some replay value, and not just because you can play as both predator and prey. You can also decide which of the Hunters and Monsters will be involved, whether you’re controlling them or not (though the class breakdown will always be the same). It even changes up the maps and scenarios (and thus the cutscenes), which makes every game feel a little different.

More importantly, things that happen in a round of “Evacuation” can impact later rounds (save, as I pointed out, for a Hunter being killed). Nothing too elaborate — it’s not like you can accidentally unlock a cage and then have to face two Monsters in the next round — but these changes can impact how hazardous the terrain may be. It’s a nice idea, but it’s hard not to wish they did more with it.

Though that’s kind of how I feel about Evolve, at least coming to it as someone who prefers single-player games and played this alone. Much like with Titanfall (though not to the same extent), the set-up, universe, and story bits make Evolve quite compelling. So much so that I want to know more, and want to play more…though really in the context of a deeper, more varied story-driven single-player mode. 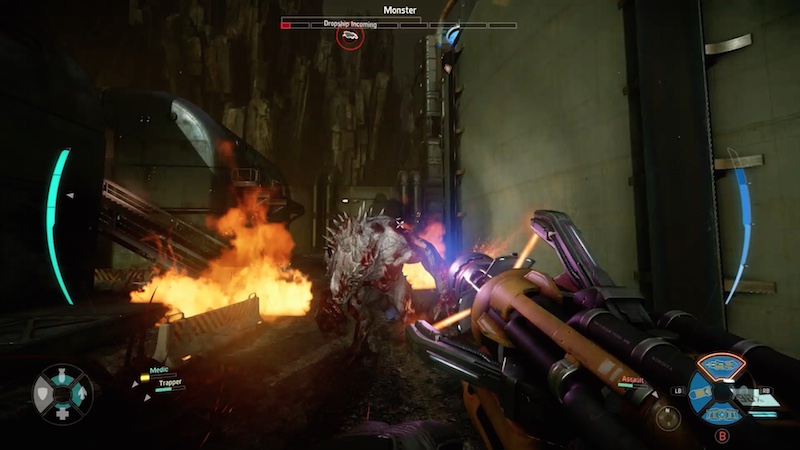 Despite all the concessions to single-player tenets, “Evacuation” still feels like a bunch of multiplayer modes strung together. While it has a good amount of complexity and variety, and the cutscenes give these missions some context, you’re still playing the same modes repeatedly. As a result, there wasn’t enough in the Solo mode of Evolve to keep me going after a couple days. Which is why creative director Phil Robb may have been right — Evolve is, “great fun solo as well” — but it’s not fun enough that I can recommend this to those who only want to play it solo. 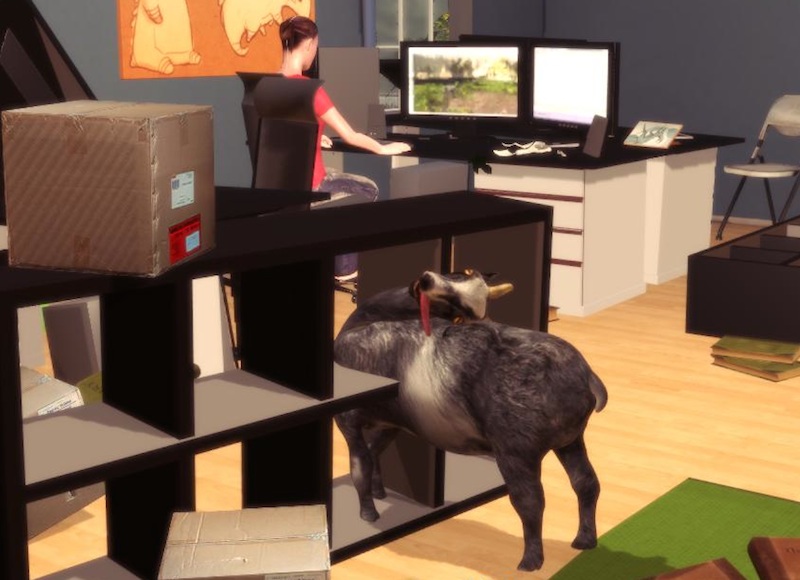 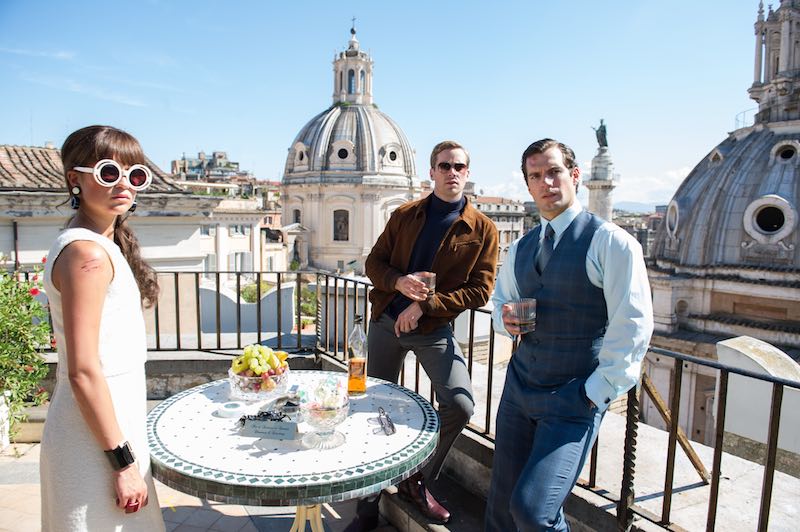 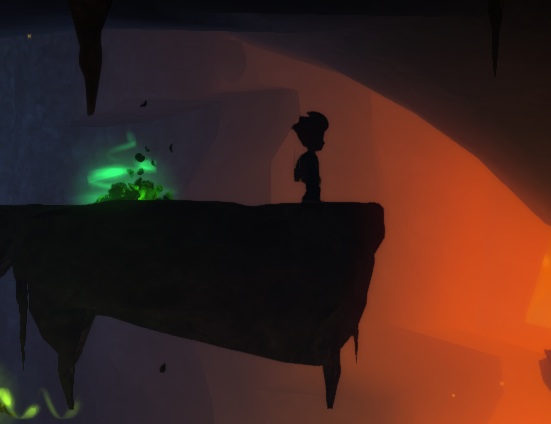