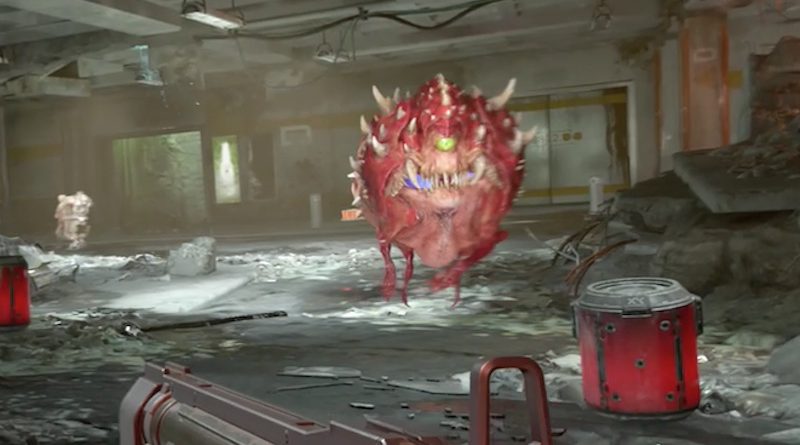 DOOM has always been about simplicity. The simple joy of running around and shooting demons without having to worry about looting or crafting or talking to anyone so you can complete multi-layered objectives. But while the new DOOM Eternal (Xbox One, PlayStation 4, PC, Switch, Stadia) continues this approach, the good people at iD Software have added some interesting new mechanics to this sci-fi first-person shooter, and this sequel is all the better for it. 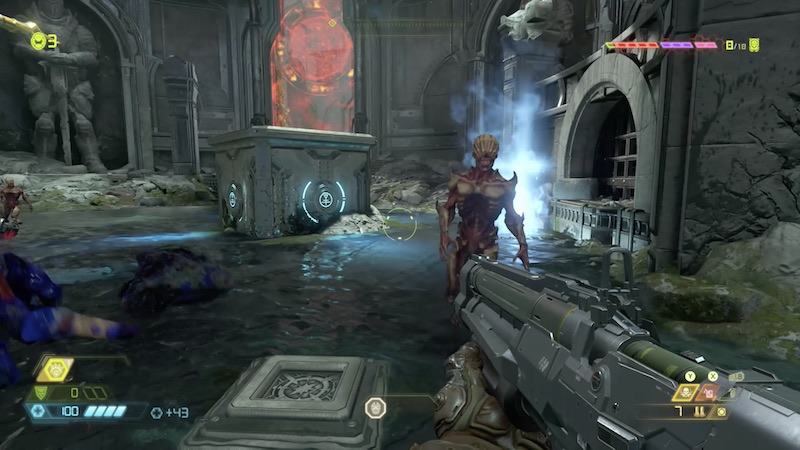 DOOM Eternal has the Earth under siege by demons. It’s up to you as the Doomslayer to end this occupation by taking out the Hell Priests and all of their minions. Which is why you spend your time in this game running, gunning, and doing things that clearly violate The Geneva Convention.

At its core, DOOM Eternal is, as the name suggests, first and foremost a DOOM game. Armed with overpowered weapons, you have to kill overpowered demons while moving around the world like you’re a professional ice skater and the ground is frozen solid. You also have guns that never need to be reloaded (though they do need ammo), while the trigger you normally use for iron sights instead activates a secondary attack, such as the shotgun swapping shells for sticky bombs.

Where DOOM Eternal distinguishes itself from the earlier games, and especially the previous installment, is in how you replenish your ammo, shields, and health. As always, you’ll find some lying around, and enemies will drop some when they die. But this doesn’t happen nearly as much as it did in the previous games. Nor can you carry as many bullets as you can in other shooters.

Instead, if you really want to stay heathy and armed to the teeth, you need to perform Glory Kills, those brutal Mortal Kombat-esque finishing moves you do to your enemies when you’ve hurt them so much that they start glowing. While they’ve paid off before, now they’re especially generous, which is helpful since they’re the best way to stock up on supplies. 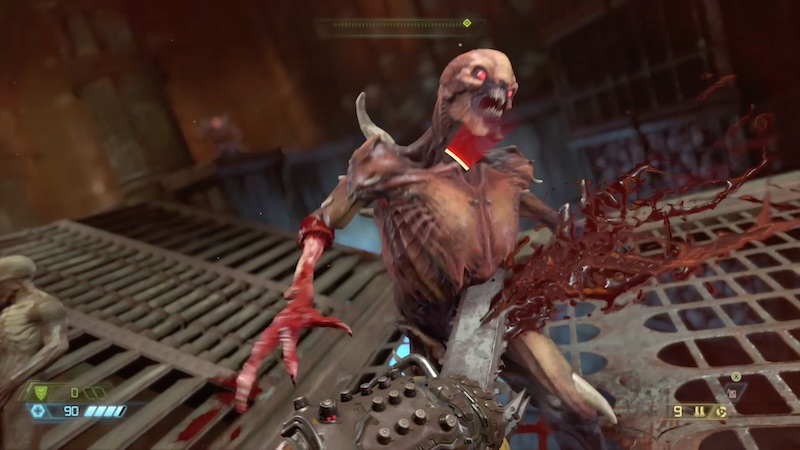 performing these Glory Kills is easier in DOOM Eternal. For starters, your faithful chainsaw is now not a separate weapon you switch to like your shotgun. Instead, you bring it up, swiftly and decisively, with the touch of a button, and watch as it automatically cleaves an enemy in two. Or three. And while it still needs gas, it will slowly recharge one of its three segments.

Similarly, DOOM Eternal also gives you a shoulder-mounted flame thrower. Which, admittedly, doesn’t do a lot of damage, especially to larger enemies, but it does cause them to drop armor shards.

Lastly, you now have a shoulder-mounted grenade launcher. And while it doesn’t have any added benefit, it is a more effective way of handing out explosives to those in need.

What all of these changes in the combat does for DOOM Eternal is give it more layers, and make you, the player, have to take more into consideration. Sure, you’re still runnin’ and gunnin’, but now you have to be a bit more thoughtful about it, and constantly be on the lookout for enemies who are glowing, or close to it, which gives this a more varied feeling while still being frantic and harried and, well, totally DOOM-y. 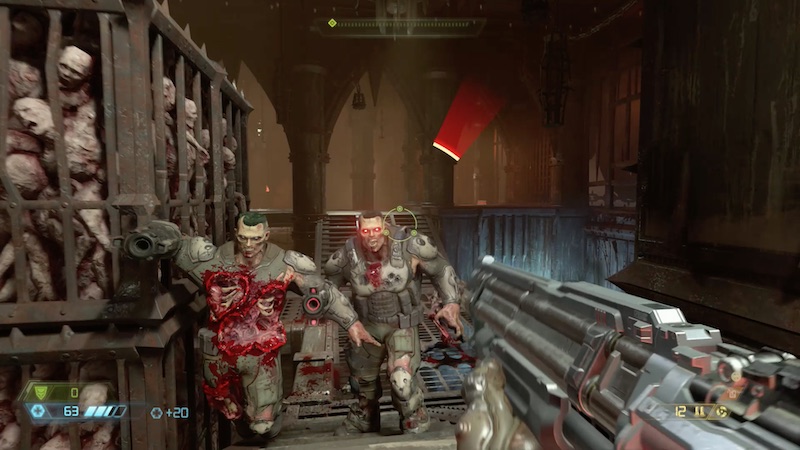 has layers when it comes to customizing your character and his equipment in the game’s story-driven campaign. Not only do you have a choice when it comes to your weapon’s secondary attack, but you can also augment those attacks, add new functions to your armor, learn special skills, and upgrade your health, armor, and ammo carrying capacity, with the latter done in such a way that it can give you other special skills.

This depth also applies to the multiplayer in DOOM Eternal. Dubbed Battlemode, it casts one player as the Doomslayer and two others as demons. Not surprisingly, this mode also has some depth, in that you can customize the special skills and abilities of the Doomslayer and the demons, and have a choice of demons. It also takes place on small, almost claustrophobic maps, which keeps things as frantic as when you’re being surrounded in the campaign.

DOOM Eternal also adds new mechanics when it comes to getting around, ones that are present in both the campaign and Battlemode. There are now cliff faces you can latch on to, climb up or down, and leap off of. Couple this with a mid-air dash you can do twice (and maybe more), the ability to double jump, and some horizontal poles you can grab and fly off of like a trapeze artist, and you have times when you’ll worry more about how to get to the next gunfight than you will how you’ll survive it.

While all of this added depth makes DOOM Eternal as engaging as, well, the previous DOOM, the game does, unfortunately, have some issues. Thankfully, most are minor, and not deal-breakers. Like, for instance, how the controllers are overly sensitive, but can be adjusted. 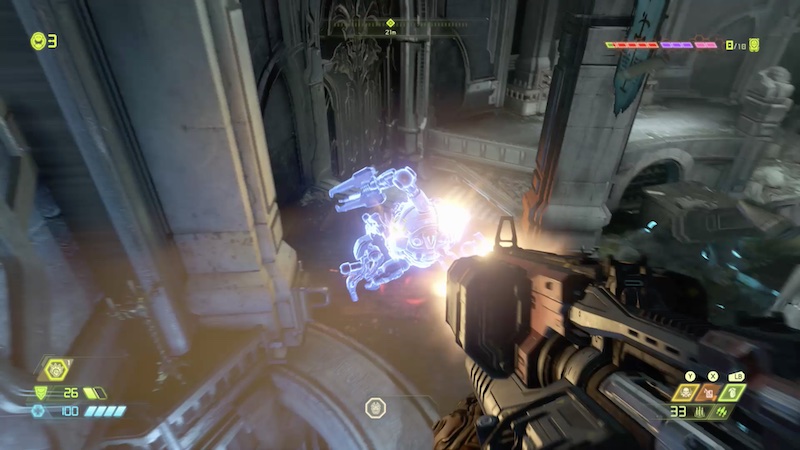 while platforming is always problematic in games with a first-person perspective, and DOOM Eternal is no exception, it actually works about as well here as it possibly could. You can actually grab those cliff faces from much further away than you can in most games (and real life), while being able to double jump and do a mid-air dash can usually keep you from falling to your death. Which doesn’t necessarily make these parts fun, especially when they’re as complicated as a Mario game, but it does keep them from being frustrating.

The campaign in DOOM Eternal also doesn’t take advantage of being set on Earth. What made such post-apocalyptic games as The Division and Fallout 3 so effective (and, for some, emotionally resonant) is that they made you feel like you were in the ruins of New York City and Washington D.C., respectfully. But the cities you explore in DOOM Eternal are generic, and could be the warn-torn remains of any metropolis where there’s skyscrapers. Though, again, this isn’t a huge issue given how the levels you do explore are intricate and make for interesting battlefields.

It also gets a little annoying that DOOM Eternal doesn’t let you use iron sights. And not just because every other shooter does it, so you spend the first hour, hour and a half accidentally deploying your gun’s secondary attack when you really just wanted to be more accurate. No, it’s because there are times when you need to be more accurate, and can’t. Larger demons have weak spots, and unless you destroy them, killing these enemies can take a bit of time and ammo to dispatch.

It’s also the story isn’t as deep as the combat — it’s not as good as the ones that drove DOOM and DOOM 3 — and the same can be said for multiplayer, which could use more modes.

DOOM Eternal also has a problem so common these days that I just cut and paste the following paragraph into every relevant review: the type is too small. If you sit at a reasonable distance from your television — y’know, like your mama told you to — you’ll have trouble reading the tutorial messages, the menus, and the mission objectives. Which is ironic given that this has an option to make the subtitles bigger. 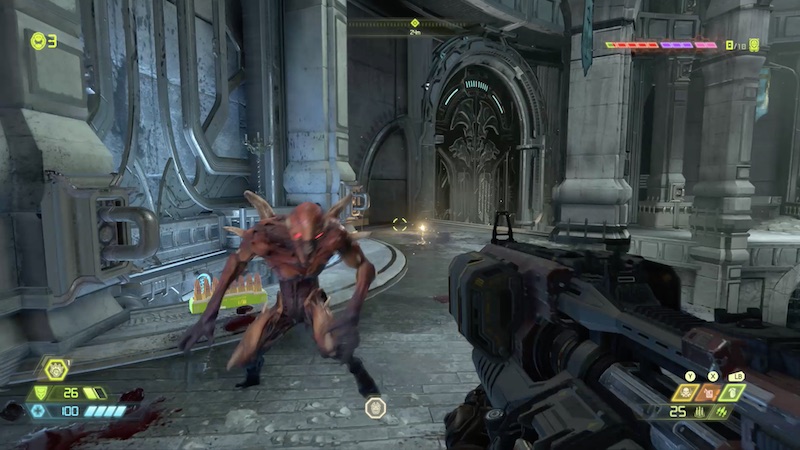 But while it would be better…

if you could use iron sights to shoot a sticky shotgun shell down the throat one of those floating eyeball demons that’s hovering over an accurate recreation of a Manhattan street where there used to be a bookstore you really liked, DOOM Eternal still manages to be an effortless fun and engaging sci-fi first-person shooter. By requiring you to brutally kill your enemies when you need supplies, this adds a level of strategy that, while not simple, does make killing those damn demons very satisfying. 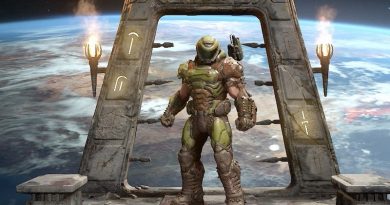