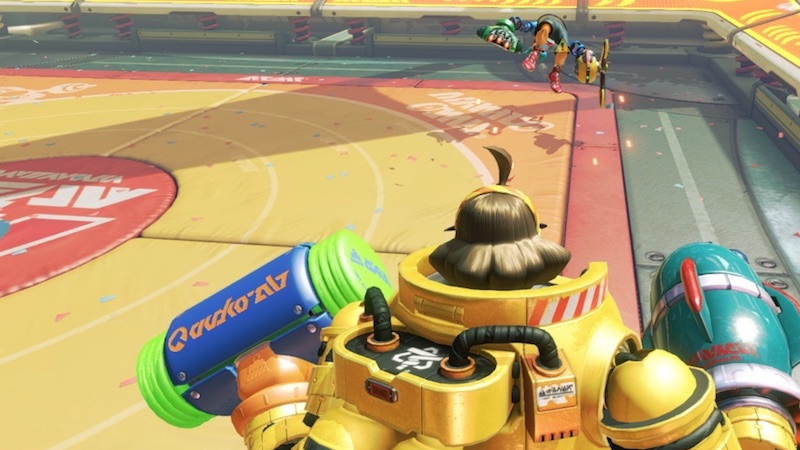 Nintendo is usually good about bringing its biggest franchises to every game system they make. But while you may have thought it was more a matter of when than if they’d make a new Punch-Out!! for the Switch, well, we’ve got good news and some bad news. The bad news is that it might not happen because the good news is they’ve kind of done with Arms (Switch), a cartoony, three-dimensional fighting game that’s decidedly Punch-Out!!-esque. 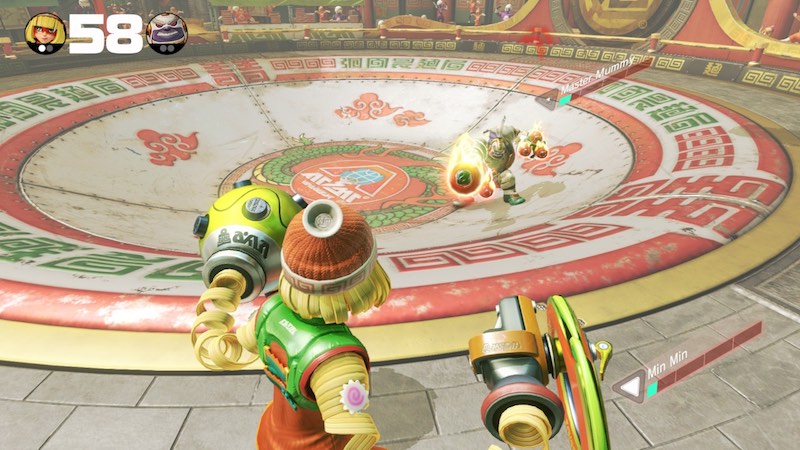 As with any fighting game, Arms obviously has you getting into a series of brawls with other characters. But what it makes this different are the fighters, who have long, Slinky-like arms — or pigtails in the case of Twintelle — with different attachments at the ends, which are the titular Arms. At the beginning of a round, you choose between three different Arms, which you can mix and match as you see fit, utilizing two of the same or different ones. These Arms don’t just smack people in various ways, some also launch projectiles at your opponents. And while Arms are initially specific to a character, you’ll later be able to unlock and utilize another character’s Arms, as well as set up character-specific loadouts.

Besides landing body blows, though, your Arms in Arms can also grab opponents, bringing them in close for a couple of quick jabs. But where things get tricky is that you have to wait a split-second for your arms to recoil before you can throw another punch or grab. Which mean that while you can punch or grab someone from afar, you might also get grabbed while waiting for your Arms to retract.

As you land punches and grabs, you fill up your triangular “Rush” meter. When activated, this makes your Arms do special attacks. The “Rush” meter can also be filled if you grab one of the occasional “Rush” power-ups that appear randomly, power-ups that can also restore your health. Though there’s also times when someone drops what looks like a soccer ball on the field, if soccer balls exploded, lit you on fire, or shocked you if you don’t punch them towards your opponent in time.

Defensively, Arms also has a block button, naturally, though you can also block if you manage punch or do a grab move at the same time and angle as your opponents’ incoming attack. Though on the rare occasions when I managed to pull this off, it was more good luck than good timing.

All of which is done — and this is where Arms is most like Punch-Out!! — from behind and slightly above your fighter. Though it’s the latter aspect that keeps this from being truly Punch-Out!!-esque, since you don’t look through a wire frame version of your combatant. 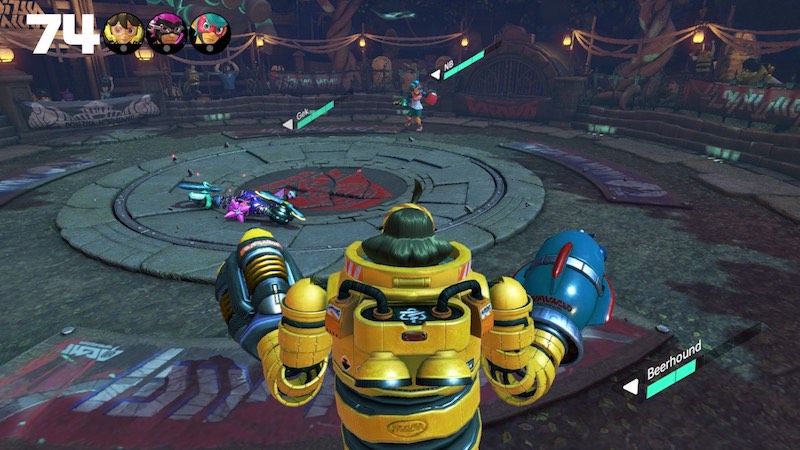 Arms also has different kinds of brawls. While most are fights to the death — this is a Nintendo game after all — in “Hoops,” confrontations are held on a half basketball court, and you have to grab your opponent and slam them into the basket, while “Skillshot” rounds have you and your opponent standing on opposite sides of a court, trying to hit targets in hopes of scoring the most points in 60 seconds. There’s also “V-Ball,” which is basically volleyball, as well as “1-On-100” in which, as the name suggests, has you taking on a hundred grunts.

The arenas in Arms are also rather unique. In one, you can jump up onto a floating platform that moves around, giving you an aerial advantage, while another curves downward in the middle like a wok, and still another seems to be set in the limo arrival section of a hotel on Hollywood Boulevard, complete with the Walk Of Fame.

As for modes, Arms has a circuit called Grand Prix, in which you have to win ten fights to win the crown; one-off fights in “Versus”; as well as three online modes that allow you to engage in friendly fights (“Party Match”), fisticuffs with friends (“Friends”), and serious brawls (“Ranked Match”). Though you need to beat four levels of “Grand Prix” to unlock the latter.

For those who prefer to go it alone, both “Grand Prix” and “Versus” are fun, especially the former, which has you taking on a different set of opponents, arenas, and game types for every fighter. But the game really shines when you play online, and doubly so when you get into a fight that’s a three- or four-person free-for-all. Not only is it more challenging to fight other people than the system, it’s also less predictable, both of which make online conflicts a lot more engaging. And I say that as someone who doesn’t play well with others.

Together, these elements make Arms feel both familiar and unique at the same time. As much fun as the straight fights may be, it’s the ability to take on two or three at a time, as well as those odd modes, that keep this from becoming monotonous. 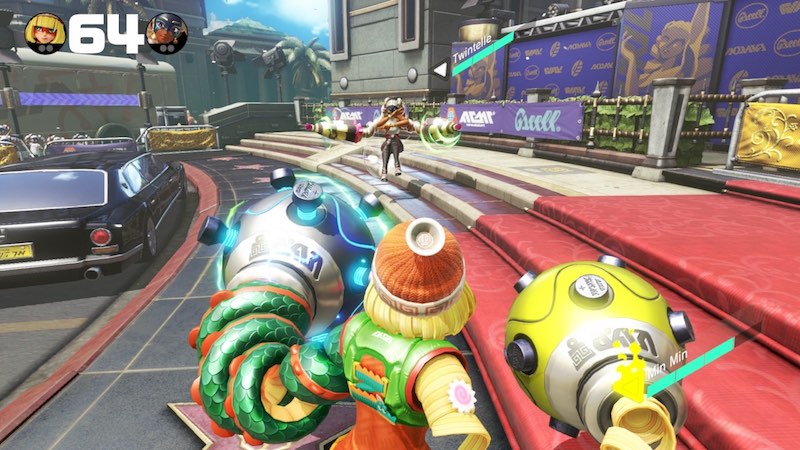 As for how well Arms works in Switch’s different configurations, like most games, it’s best played on a TV, works well if you use the Switch as a portable system, and comes up short if you use the system as a portable TV. Controller-wise, while you can use the Joy-Cons as motion controllers, which makes this feel like the boxing part of Wii Sports, moving around isn’t as easy when you do. Instead, this decidedly works best when played with the Joy-Cons attached to the side of the Switch, or in the holder that makes them like an Xbox or PlayStation controller.

While Arms is a clever and relatively unique fighting game, it’s not without its problems. One of which is super annoying.

First, Arms could use more diversity when it comes to its roster. And no, I don’t mean that in a gender, sexuality, race way; rather that, aside from their individual Arms, they’re not that different from each other. And that goes double when you start unlocking other character’s Arms. Which is another issue since you aren’t given a choice of which Arm you’d like to buy. Instead, you play a mini game and then get the attachment you used in it. Which essentially means that if you want three specific Arms for your favorite character, you’ll need to earn a ton of money.

It’s also odd that Arms doesn’t have multiple difficulty options for its single-player modes, especially since the game isn’t terribly difficult. On my first try, I only failed to make it through a “Grand Prix” run undefeated because I didn’t know going in what to do in “Hoops” and “Skillshot.”

But the most infuriating problem with Arms is that you can’t turn the music down or off. Not only is it sometimes too loud relative to the sound effects, but most of the music is just awful. Like something you’d hear in a commercial for a tween movie. I’m not asking for Nintendo to give this an all-Led Zeppelin soundtrack, or to even let me bring in my own tunes, but the inability to turn the music off, or at least down, is really irritating. 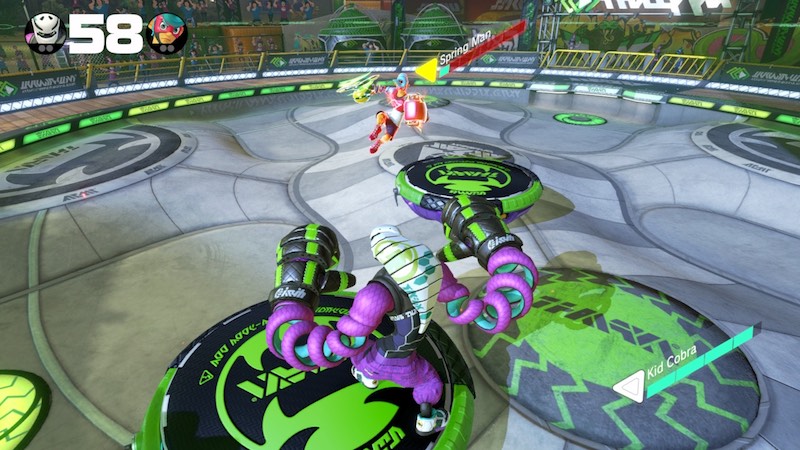 Despite these issues, and the temptation to play this with the sound off, Arms still manages to be an addictive, engaging, and often unique cartoony brawler. So much so that if Nintendo doesn’t make a new Punch-Out!! for the Switch, but does make an even deeper version of Arms, that would still be really good. 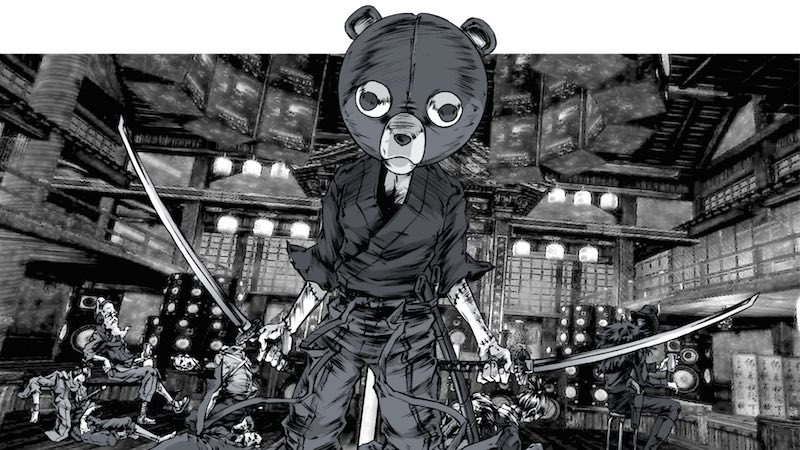 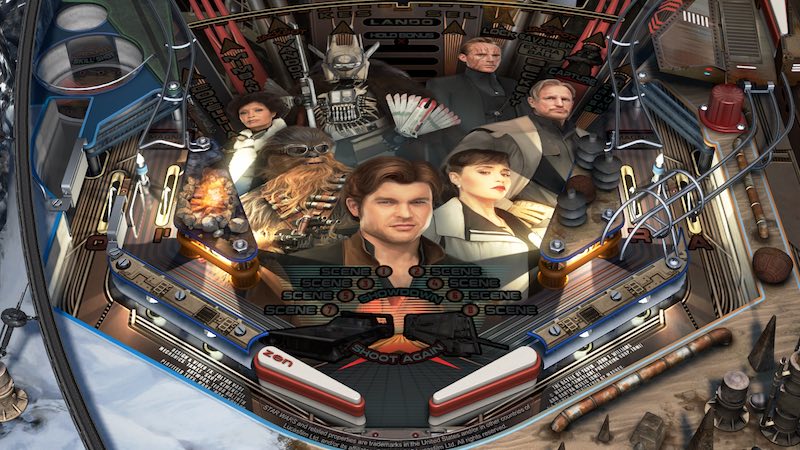